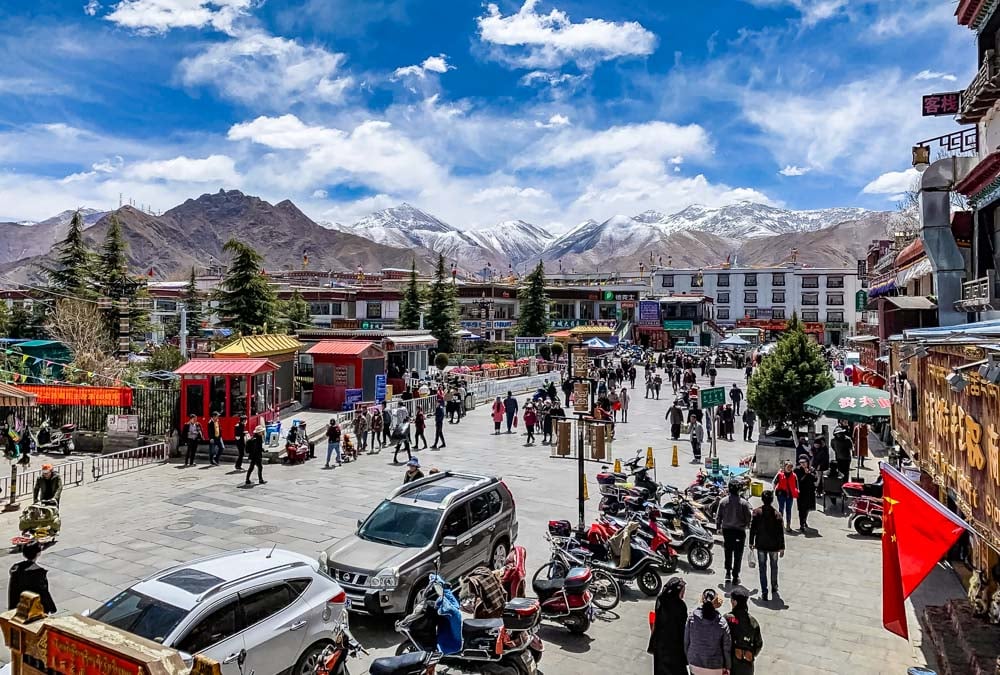 The city of Lhasa, capital of the autonomous region of Tibet, China, is a powerful blend of ancient culture and fast paced changes. Ringed by enormous mountains. The city rests at 12,000 ft. / 3600 meters in altitude, and the peaks nearby soar well above the plateau.

It took quite a bit of effort to get here. There was paperwork and a tourist visa and hours and hours on planes, but it was totally worth it. There was even that magical thing that happens when traveling outside of my home country.

On the last flight into Lhasa, I was seated next to a gentleman flying alone who spoke multiple languages, none of them Mandarin or English. The flight crew was multilingual, too, but neither of the two languages they were using on the flight overlapped with the Gentleman’s languages.

The traveler’s magic was that I have minimal proficiency in Spanish, the only language the Gentleman and I had in common.  So, I translated the Flight Crew’s information from English to Spanish for him. And we had a pleasant attempt at small talk, at least within the range of my limited Spanish vocabulary.

It was lovely to be just the right person in the right spot to help out a fellow wanderer.

After landing, I learned the airport is quite a ways south of the city. The drive along a spacious, multilane divided highway gave me a little context for life in Lhasa.

The road from the airport to the city was busy with trucks hauling materials, and as we neared the edge of town, I could see why. When I visited in Spring 2019, plans for a high-speed train line to Lhasa were underway, and there was construction everywhere.

New buildings lined the main road, and the same was true several days later when I traveled a short way northwest out of town. It is bustling. This rapid change adds a tension to the future of this to this historically and religiously important area.

My first day, I was able to visit Jokhang Temple, the oldest Buddhist temple in Lhasa. Located in the center of the old city, or more accurately, the city grew up around it as it predates the rest of the area.

The name translates to “the house of Buddha.” The original structure dates from around 647, when it was built by Tubo King Srongsten Gampo to mark his marriage to the Nepalese princess, Bhrikuti.

The temple also houses the venerated Sakyamuni Buddha, a life size image of the 12-year-old Buddha, brought from China by Princess Wencheng in 640. Legend says that it was Princess Wencheng who identified the location where the temple should be built using her expertise in divination.

The original temple has been enlarged over time, and despite periods of hostility to Buddhism, for example during the reign of King Tresang Detsan, 755-797, it remains an active temple, and an important pilgrimage site.

The temple is ringed with Buddhist pilgrims who have come to circumambulate the structure, walking in circles three times around the entire temple complex. The devout bring offerings of white scarves and yak butter, and some prostrate themselves at the door of the temple.

Crowned with a gold gilt room, the main entrance is marked by the wheel of Dharma, with deer on either side. The symbol is a reference to the Buddha’s first sermon, given in a deer park near Varanasi, India.

The four-story structure’s center is open to the sky. Photos are allowed in the open courtyard, but not the rest of the temple.

The interior, filled with small hallways and chapels is a place of religious practice, so it is best experienced with one’s full attention. The spaces are small, with butter laps and minimal lighting, so I was careful to watch my step and be unobtrusive to others.

The next day I was driven a short distance past the outskirts of Lhasa to visit a small nunnery. I was reminded of the elevation by the lack of trees, which struggle to grow at this elevation.

However, this also meant it was easy to see for miles on either side of the road. The soil is rocky, so stone or modern concrete is a common building material.

As in Lhasa, the small nunnery complex was painted white except for a thick red band near the roofs. The red is the same color as the robes worn by most Buddhist monks and nuns in Tibet.

Just outside the entrance to the nunnery was a row of prayer wheels, covered in yellow and red cloth.

Our guide for the day invited us to turn the wheels, each of which is filled with lineage texts, so turning them helps a person to accumulate wisdom and merit and to purify negativities.

My travelling companions and I were welcomed and invited to wander the interior courtyard. The nuns were busy with a small area they farm and other tasks, but we were invited to enter their small temple and we were given a brief tour.

Later, as we walked past a small farm, I was reminded of the fences in Iowa, where I grew up.

They were made of the most available materials and nothing was wasted. I recognized that same practical impulse in the stone walls strengthened with dried earth and dung around a small livestock enclosure.

Back in Lhasa, the Sera, or Wild Rose Monastery is one of the three great Gelug university monasteries in Tibet.

Founded in 1419, it is noted not only for the education of young monks, but for the debate style of learning. Each afternoon, young monks in training assemble outdoors in the debate arena where they pair-off. The “defender” sits on the ground, waiting to hear the questions posed by the standing “challenger”.

The end of each question or idea to be debated is punctuated by a loud clap, when the defender then responds. The gesture reminded me very much of the wind-up when pitching baseball.

The public is welcomed to come and listen while ideas are debated, in the hopes of removing misconceptions for all. It was fascinating to watch and listen.

As I was leaving the monastery, I heard a shout. I heard my name called a second time, and the Gentleman from the plane came running up.

With a quick kiss on each cheek, he greeted me, enthusiastically, thanking me again for my help conveying information during the flight, and then with a quick wave and a smile, he was gone. Traveler magic is a wonder.

Probably the most photographed part of Lhasa is the Portala Palace.

It is a stunning complex, sitting at 3750 meters / 12,303 feet in elevation, on top of the Red Hill, the highest point in the city. The buildings rise another 115 meters / 377 feet. For 1300 years it has been a place of both pilgrimage and political activity.

Construction of the Portala Palace begin after King Song Tsen Gampo moved the Buddhist and administrative center of his kingdom to create the city of Lhasa around 633.

He selected the Red Hill for the palace, with the surrounding area to be his capital city. The next major building phase was during the time of the fifth Dalai Lama in the 17th century.

The palace remained a political and religious center, as well as the home of the Dalai Lamas up through the 20th century. The palace was declared a UNESCO World Heritage site in 1994.

I was fortunate to get a crisp, sunny day for my visit. As I walked up the terraces leading to the entrance, there were benches occasionally to sit and take in the view. The stone pathway was not too steep, but I took my time, savoring the experience.

It was also clear that my travel companions and I were not locals, and I was asked repeatedly to be in selfies with pilgrims who had travelled great distances to come to the palace.

What a joy to have this chance to meet other people. Even when we did not share languages, we were able to share smiles.

At the highest terraces, the city views were spectacular. I could see the old town center, as well as the growing city, nearing one million inhabitants.

I did not take photos inside. There are beautiful picture books for sale that capture the beauty of the interior so much better than I could have with my phone’s camera. I also wanted to be in that moment for myself, experiencing the interior rooms, chapels, official offices and twisty narrow walkways inside the palace complex.

There are places where stairs were more accurately the steepness of ladders, so I also wanted to keep my hands free to hold on to railing and rungs.

As we reached a high courtyard where there were refreshments for sale, the local equivalent of a “bodega cat” purred on its sunny perch.

The exit leads back down another series of terraces. Again, the views to the north over the city were clear, and the path around which the devote circumambulate the entire complex was visible 300 feet below.

As I started down the terraces, again being asked to join in other visitor’s selfies, one thoughtful woman gestured her willingness to take a photo of me. That may be the sweetest keepsake I have, reminding me of the generosity of the people I met in Lhasa, and the wonder of spending even a little time on the Roof of the World.