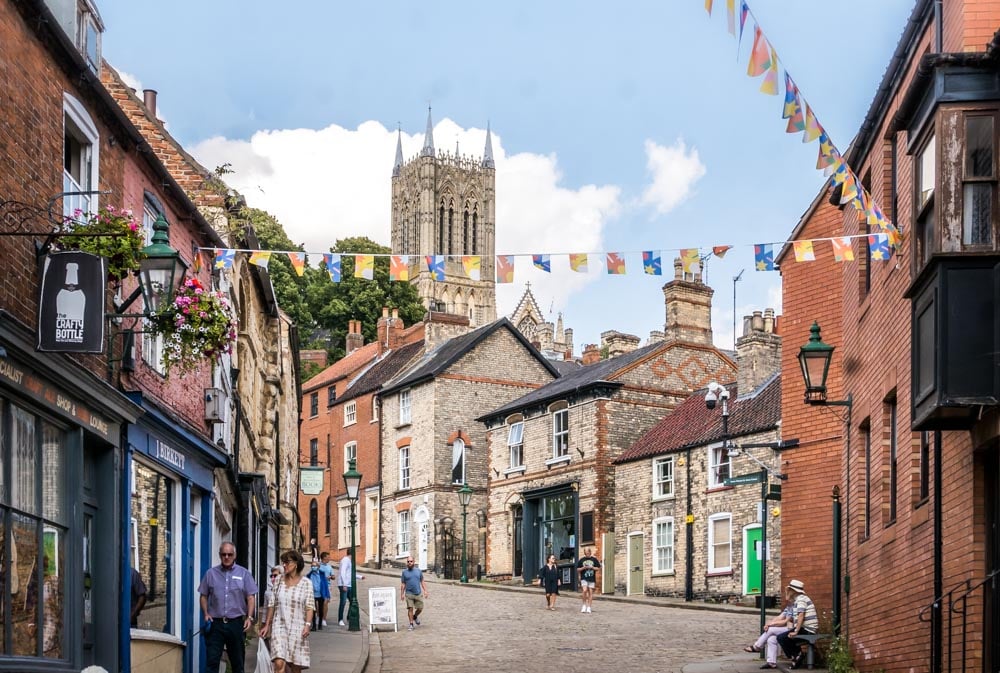 Steep Hill and The Strait are two cobbled streets in the City of Lincoln that lead into each other. Together they connect the old Lincoln Cathedral and Castle area at the top with the town at the bottom.

The streets are a must see when visiting the area. A walk up or down them it is full of history and charm and little secrets hidden on the way.

Today, Steep Hill and The Strait are full of beautiful and quaint independent shops, book stores and boutiques. Those that feel fit enough to take on the uphill get a cardio vascular workout whilst doing the shopping too.

In fact it is a remarkable sight during a visit to Lincolnshire as much of the City’s surroundings are so flat.

Lincolnshire is one of the flattest counties in England, but, here within Lincoln, Steep Hill is the 4th steepest street in England.

It has an average gradient of 16.12° and as far as the naming it Steep Hill goes, it is not hard to work out how it came into being. Great for carrying heavy bags of shopping up and down. In fact parts of it has handrails to assist in your ascent if needed.

For the street’s history we need to go back to the times of the Romans. In the times when Lincoln was called Lindum Colonia.

The Upper Colonia was founded first in the area that is now the Cathedral and Castle, a fortress on the great Roman Road from York to London called Ermine Street.

A second, lower Colonia was built at the bottom of the hill at Lincoln (now the main modern shopping area).

The Romans built a great stepped street to connect the two, the beginning of what is now Steep Hill. Remnants of the great gate entrance to Lindum Colonia can be found in shop 44 and on the wall opposite it.

From top to bottom, Steep Hill is packed with interesting architecture and buildings. I will go into detail on some shortly, especially some that date back to Norman times.

Some are also now little shops that have hidden historical relevance. For instance, Brown’s Pie Shop was the home of Lawrence of Arabia during 1925.

Built in the mid 12th Century, Jews House is possibly the oldest residential buildings in Britain, if not, certainly one of the oldest.

It has been a restaurant since 1973 but it has been occupied ever since it was built nearly 1000 years ago during the Norman period.

The name comes from when it was originally owned by a wealthy Jewish trader, Bellaset of Wallingford. She was executed in 1287 for the practice of clipping coins (shaving off parts of coin metals for profit). Just 3 years later in 1290, all Jews were expelled from the country and the house was seized.

It is the Jews of the 12th Century that had financed the building of Lincoln Castle.

Immediately next door and up from Jews House is Jews Court. Again dating from the 12th Century but with modifications throughout time since. For example the windows have lost their Norman age arched look and are 19/20th Century.

Historians have discovered that this building contained a medieval synagogue.

There is yet another great example of Norman Architecture on Steep Hill that is called Norman House.

The front shows great examples of arched doorway and mullioned (double arched) windows from the Norman period, and again known as one of the oldest surviving domestic buildings in Britain.

Story has it that it was built for a Jewish moneylender called Aaron of Lincoln. A fact that has been disputed lately by some historians but nevertheless the house is known to have had Jewish residents before the 1290 expulsion.

The Norman House is now a tea shop with a bookshop at the side entrance. An entrance that was traditionally used by Jews for a trade entrance.

A building from another era, the 15th Century. Harding House.

Built in stone on the bottom half with timber on the top half it is now an art gallery. The name comes from the person that owned it from 1930 until his death in 1952, when he gave it to the City of Lincoln. The vicar at the local All Saint’s Church, Canon N,S. Harding.

Although all affectionally known as Steep Hill, the bottom half from Jews House downwards is technically called The Strait.

As you walk uphill here you get a magnificent view. The cathedral tower behind the old buildings of Steep Hill and the hustle and bustle of shoppers and tourists within. A wonderful vibe.

Steep Hill is a must do when in Lincoln and you have the time. It is like stepping through time itself with one walk. Buildings nearing 100 years old with great history. Independent shops and cafes galore.

If you want to enjoy it and feel you could not walk up it? Then walk at your leisure downhill and catch the bus, The Steep Hill Shuttle back up.