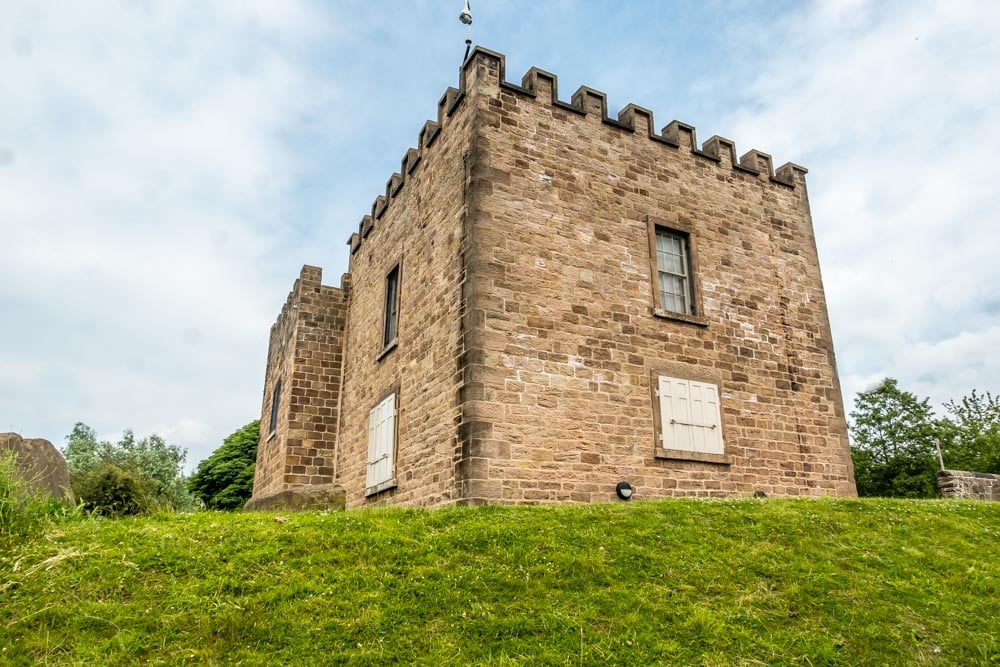 Situated on hill in the south west of Rotherham I came upon Boston Castle. A rather unique looking building, square, quite small and not grand like most castles tend to be.

It had a commanding spot right at the top of Canklow Hill, with great views. So I took a walk around it and investigated further. Plus I wanted to find out why it shares its name with a city called Boston in Massachusetts.

The 3rd Earl of Effingham

The story of the building begins with Sir Thomas Howard, the 3rd earl of Effingham. An offficer in the military and politician, devoted to the country but with a mind of some independence and principles.

In 1768 he wanted to marry the love of his life. His family was against it so they eloped to Gretna Green to marry.

In 1775 he then wanted to build the castle like structure on the hill as a hunting lodge or folly. For shooting parties in Canklow Woods next to it and to entertain guests within the building.

The House Upon The Common

The small, square building was built during the summer of 1773. At this time records show that the lodge was simply known as ‘The Lodge Upon The Common’ or ‘The new building on Rotherham Common’

However, later in that year of 1773, something big was happening across the Atlantic that would not only start to change the political make up of the world but also lead to a change of name of this building and a US ship.

Yes, we now head over to Massachusetts where the colonists began an uprising against the Tea Act. In short the British Government was taxing tea that was sent to America. The colonists had no representation in the UK houses of Parliament and thus protested against any taxes.

The tea party movement in Boston was arguing for ‘no taxation without representation’ in Westminster.

In December 1773 the tea party boarded ships bringing in tea and threw chests of it off the ship and into the waters of the bay.

However in retaliation and to quell the rebellion, the British started sending soldiers over. Escalation after escalation you end up with the American War of Independence.

The Earl of Effingham was an officer devoted to the British Crown. But, he hated more the fact that sending soldiers to fight their own peoples was absolutely wrong. He sided with the tea party and resigned his commission.

His support of the Boston Tea Party only grew and grew.

During 1774, records show that he started to fondly call this lodge Boston Castle in support of the colonial movement in North America.

He went further in that he decreed that no tea be allowed to be consumed on the premises. Both in the castle and in his home. The rule was never broken.

America did not forget his support for the colonial people. It named the ship USS Effingham in is honour.

We all know that America won the war of Independence. And one of the future presidents would be John Adams. But before he became President he was sent to be an early US ambassador to Great Britain.

It is said that he visited Thomas Howard at his home or maybe even Boston Castle where they drank ‘coffee’ and toasted American independence.

Today there is a more modern visitor centre attached to the cuboid building. I had my dogs with me, I was passing by on a walk, so could not go in. But apparently it is restored to its former glory with a viewing platform on top.

The grounds around the castle have been turned into a little park too for little walks and views. If you want to walk further you can take in the ancient Canklow Woods.

There is a car park here and it is free. Postcode S60 2BD

The views from up on the hill from the castle are huge. Looking outward you can see all the way across the Don Valley and beyond.

Plenty of known landmarks in sight from the city of Sheffield to the Meadowhall Shopping centre with hills and valleys stretching off into the distance.

What was the grounds of the shooting lodge is now a maintained park with pathways from the top to the bottom of the hill, wooded areas and what was once a bowling green.

Even here you see some other quirky history, along the edge of the park is a well quarried sandstone wall of stone and upon it is a door to nowhere.

College of Jesus And The Door To Nowhere

In 1483, Thomas Rotherham founded the College of Jesus in Rotherham. The building was built of early brick and laid upon his birth place in the town. The college was dissolved in the mid 1500s.

Today there are small remnants of the college walls, kept safe, that have survived the centuries. The oldest surviving brickwork in South Yorkshire.

The doorway of the College of Jesus was rescued and placed on this sandstone wall as a memorial to that part of Rotherham History but it is also now a door against the stone.