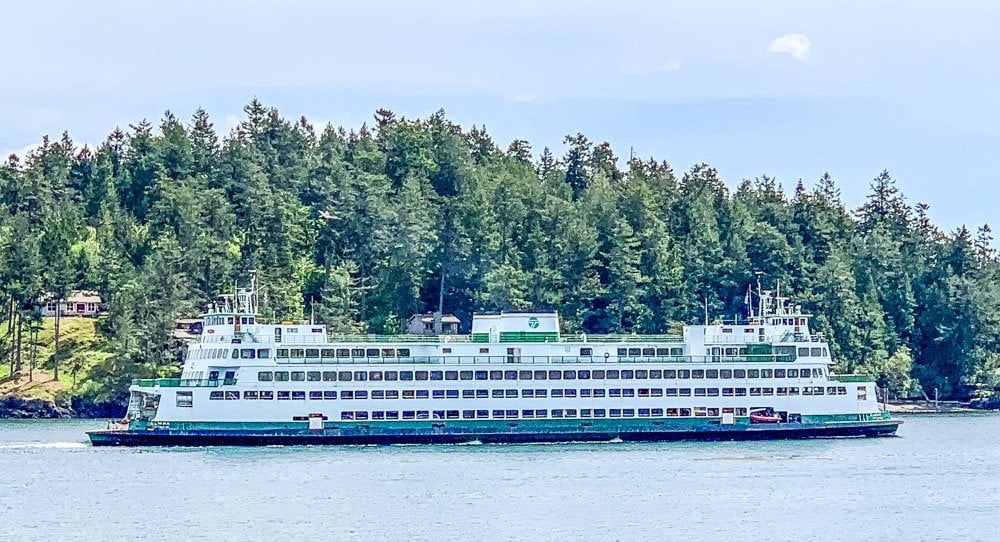 When visiting the Pacific Northwest, it is well worth the effort to take a ferry ride out to the islands north of Seattle.

My favorite is San Juan, accessible by a vehicle and passenger ferry that makes the trip from the Anacortes terminal out to Friday Harbor several times each day.

The ride is one hour, two if the ferry makes a quick stop at Orcas island along the way.

The ride through the channels and out to the furthest west island, San Juan is one of the best ways to experience the landscape and culture of this archipelago, connected by Washington State ferries, and a few small airstrips.

I strongly suggest you make a reservation and pay the fare ahead online. The ferries are often full in the summer runs, so reserving ahead ensures you can choose the day and time that works best. It is also prudent to purchase both your outgoing and return trips ahead.

The only incorporated town on the island, Friday Harbor grew from the location of the ferry terminal. In earlier years a mosquito fleet brought goods, mail, freight, and passengers.

Today, in the bay there are also pleasure crafts moored, and small private docks jut out from nearby waterfront homes. In summer the town is quite busy.

Around 2,500 permanent residents enjoy the bustle of summer tourism and the relative quiet of the winter months.

The ferry terminal is at the base of the main street, so day trip visitors can walk to the Whale Museum, the Art Museum, an array of restaurants and small shops and galleries.

It is easy to spend an entire day within sight of the ferry terminal. However, there is more to see for those who want to bring a personal vehicle or those willing to take a long bike ride.

San Juan is a great place to spend weekends, and perhaps even longer in the summer months.

The Oregon Treaty of 1846 determined that the border between the United States and British colonies would follow the 49th parallel.

This worked well except for the islands between the current State of Washington and the south end of Vancouver Island, Canada.

The treaty made a vague reference to the border being set “in the middle of the channel separating the continent from Vancouver’s Island.”

Both the United States and the British claimed San Juan Island. Settlers from both nations began to move to San Juan, and the Hudson Bay company set up a salmon curing station and a sheep ranch.

The two sides lived side by side amicably enough until June 5th, 1859 when a pig owned by the British wandered over to an American farmer’s property and was shot.

Tensions escalated until there were three British warships and the US 9th Infantry involved. When Admiral Robert L. Baynes, Commander-in-Chief of the British Navy in the Pacific arrived, he refused his order to land his troops and engage the US 9th to settle a fight over a pig.

Each side then agreed to keep no more than 100 military men on the island, and they remained there until the dispute was settled in 1872.

The sites of both camps are now part of San Juan National Park.

Closest to Friday Harbor, the American camp is on southern shore of the island.

Wide open and wind swept, the park service maintains mowed trails from the park entrance to the buildings where the American soldiers stayed.

There are abundant birds to watch on the walk out. There are few people who come out to this part of the park, so I especially enjoy the peace.

Walking the circular route, as well as following another mown trail down to the beach can fill an afternoon.

On the north side of the island is the only US national park that raises a British flag each day.

The British camp was known for being more well established. Not only was there a proper dock in the small harbor, but a number of well-made buildings stand to this day.

There is a small formal garden that includes roses. The Park Service keeps the garden cared for and nurtures the plants that were part of the original design.

At the farthest south eastern corner of the island is the third portion of the National Park. It features wide open views, an enormous windy meadow for rambling, and a long rock beach, facing south to the Olympic Peninsula.

When the sun is out, this wide beach provides a long stretch of waves and sky for walking away the afternoon.

The driftwood that has been carried up the beach by high tides during storms make for excellent seating to have a picnic and watch ships go by.

On a sunny day, the Olympic Mountains, 20 miles away, are visible across the Strait of Juan de Fuca.

If watching for Killer Whales sounds fun, then a drive to the west side of San Juan Island to Lime Kiln State Park is the way to go. Known locally as “Whale Watch Park,” visitors can watch the migrating pods pass right off shore mid-May to mid-October.

Along the way, in the center of the Island is a local lavender farm. Even early in the season, before the lavender starts to bloom, visitors can walk the fields where there are signs sprinkled throughout that clearly mark varieties and share hints for growing lavender.

At the main building, there are displays and machinery used for extracting lavender for oils, for cooking, and for personal care. It is one of the best smelling spots on the island, and on a hot day, a chocolate covered vanilla-lavender ice cream bar is my favorite treat.

The San Juan Island Sculpture Park is a must see. Open to the public, the 20 acres are filled with around 150 works at any one time. Sculptures come and go, with well known artists’ work on display, as well as newer artists.

Five trails lead across meadows filled with sculptures and past a pond, providing spaces that encourage birds to visit as well. Every time I go, the display has changed, so it is worth stopping by on repeat visits to the island.

Lastly, the University of Washington maintains the Friday Harbor laboratories with classrooms, library, and living spaces for students and researchers.

University of Washington undergraduates can spend a three-month term on site, taking a full load of classes and working closely with professors and graduate students.

Researchers and visiting scholars can apply for short term residencies that include housing and access to the UW equipment, including a variety of boats.

Academics and artists can also apply to stay at the Whitely Center, a Retreat for Scholarly and Creative Activities.

The Laboratories host an open house each April, welcoming local residents and tourists to a day of activities and sharing.