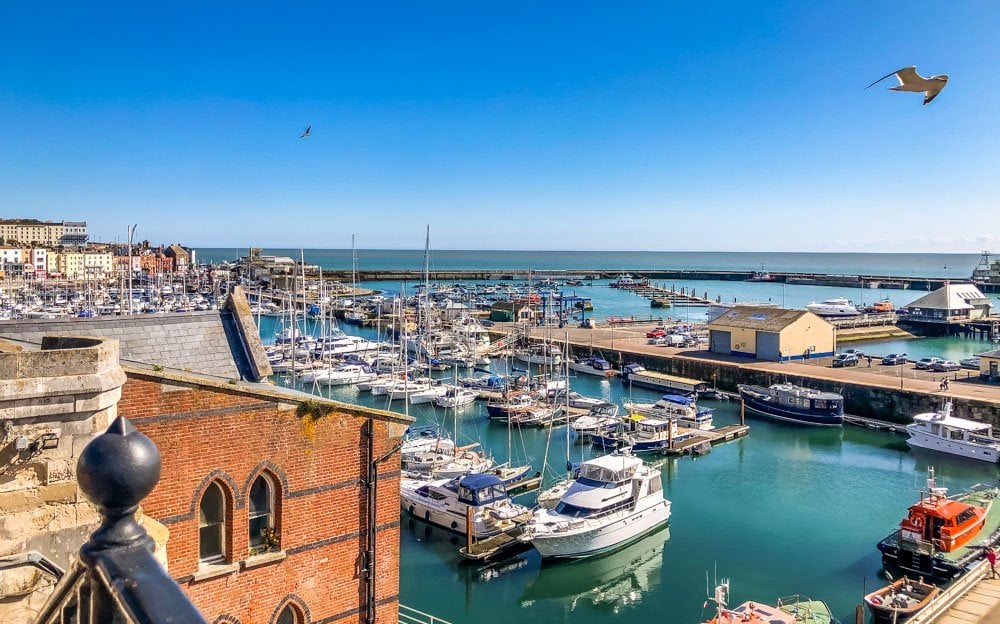 On a lovely sunny day there’s no better way to get some fresh air than a walk around the stunning, historical harbour of Ramsgate. I’d seen lots of pictures of the harbour and fancied having chips by the sea, so we headed to Ramsgate to have a look around the harbour that we’d heard so much about.

Ramsgate is situated in Thanet in east Kent. It is known for its stunning coastline and it’s main industries are tourism and fishing. The port at Ramsgate is the only port in England to be able to call itself “The Royal Harbour of Ramsgate”.

This honour was bestowed on the harbour by King George IV as a thank you for making him feel so welcome in 1821 when he was using the harbour with the Royal Yacht Squadron.

He decreed that the harbour was allowed to fly his Royal Standard three times a year on the 29th January, 19th July and 12th August. These dates are to celebrate his Accession to the Throne, his Coronation and His Majesty’s Birthday.

Ramsgate harbour was built between 1749 and 1850. It was designed primarily by John Shaw and his son John Shaw Jr. They designed the clockhouse, the obelisk, the lighthouse and the Jacob’s Ladder Steps.

The harbour today is used by cross channel freight and small working and pleasure boats. The harbour is owned and run by Thanet District Council.

We walked through the marina and along the western arm to sit by the lighthouse and watch the boats coming into the harbour. It was quite cold so we’d taken a flask of hot chocolate to sip to warm us up.

The sun was shining and was making the sea glisten. It’s such a lovely peaceful place to stop and take a break. You can look out onto the harbour and all the magnificent crafts moored there or look out onto the channel.

The lighthouse in Ramsgate harbour was originally built by Benjamin Wyatt but this lighthouse was built too close to the pier head and was constantly damaged by passing ships masts.

This lighthouse was replaced by a new one designed by John Shaw in 1842. It was powered by an oil lamp originally but now it’s fully electric and has a continuous red light shining out to guide the ships to safety.

It’s a grade II listed building and it is 11 metres high and can be found on the west harbour arm. Inscribed within the stonework you can see the wording “Perfugiam Miseris” which means “refuge for those in need”

The harbour is made up of a large marina which is controlled by lock gates which regulate the fluctuating tidal levels. There are 700 berths available in the harbour and it has facilities for refuelling, utility hook-ups and amenity blocks.

All around the harbour are lovely golden beaches perfect for a day by the sea.

Historically it was used during the Napoleonic Wars and the Dunkirk evacuation in 1940 because it was so near to the mainland in Europe.

Ramsgate was a main embarkation port from the UK during the Napoleonic Wars. Apparently on one occasion it was said that 40,000 troops embarked from the harbour. Ramsgate also helped in the rescue of the troops from the Dunkirk Beaches, during WWII.

We then walked around the harbour and up the eastern arm along past Weatherspoons and right to the tip. There’s a lovely cafe built on the very end of the east arm called the Brasserie.

You can sit and enjoy a drink or a meal there on the panoramic terrace overlooking the marina, the jetty and the sea. You can even see France on a clear day apparently.

As you walk around to the east arm of the harbour you can see the clocktower and the obelisk. The obelisk was built in 1822 and is 52ft high weighing in at 100 tons.

It’s made of Dublin granite and the first foundation stone was laid by Lord Liverpool who was the Lord Warden of the Cinque Ports. Apparently he placed some coins of the realm in the hole in the middle.

It was a bit chilly so we stopped for some lovely freshly cooked chips and ate them on the seafront on one of the many benches dotted around the harbour. Beware of the greedy seagulls though as they love to pinch your chips !!

Around the marina you can see all the Regency and Victorian buildings all lining the harbour. There are apparently 900 listed buildings in the town with 200 of those in and around the harbour.

I loved all the little shops, boutiques and cafes built into the cliff faces around the harbour.

Whilst in Ramsgate you can also visit the tunnels. The tunnels started off as an old railway tunnel which was a mile long. This was opened in 1863 to join the towns of London, Chatham and Dover but was closed in1926 when Ramsgate station was opened.

At the start of the war they built Deep Shelter Tunnels and linked these to the old railway tunnel. These new tunnels were two and a half miles long and had entrances around the town.

This network of tunnels was opened in June 1939 and could hold around 60,000 people. During WW2 Ramsgate was known as the most bombed seaside town in the UK.

After they have bred the adults and young birds head up the River Stour and head for Ramsgate for the winter months. Here they can find shelter and food. Eating fish, shrimp and small crabs. They then head back to the river in the early spring.

You can also see nesting shags and many wetland wintering birds such as the Brent Goose from Siberia, Purple Sandpiper from Norway, Knot from Greenland, Turnstone from Canada and the Sanderling from Iceland.

Ramsgate Harbour is the perfect place to wander around and take in the magnificent sea views and take a look at the impressive boats moored in the harbour.

There are plenty of places to grab a coffee and a slice of cake or a sit down meal and of course ice cream and fish and chips. The harbour is surrounded by historical houses and the town is right next to the harbour if you fancy shopping when you visit.

There’s so much to see and it’s a really lovely place to wander around. Don’t forget to take some change for the parking as most of the spaces along the seafront are to be paid for and wrap up warm as it can be chilly walking out on the harbour. A must visit if you are in Kent.