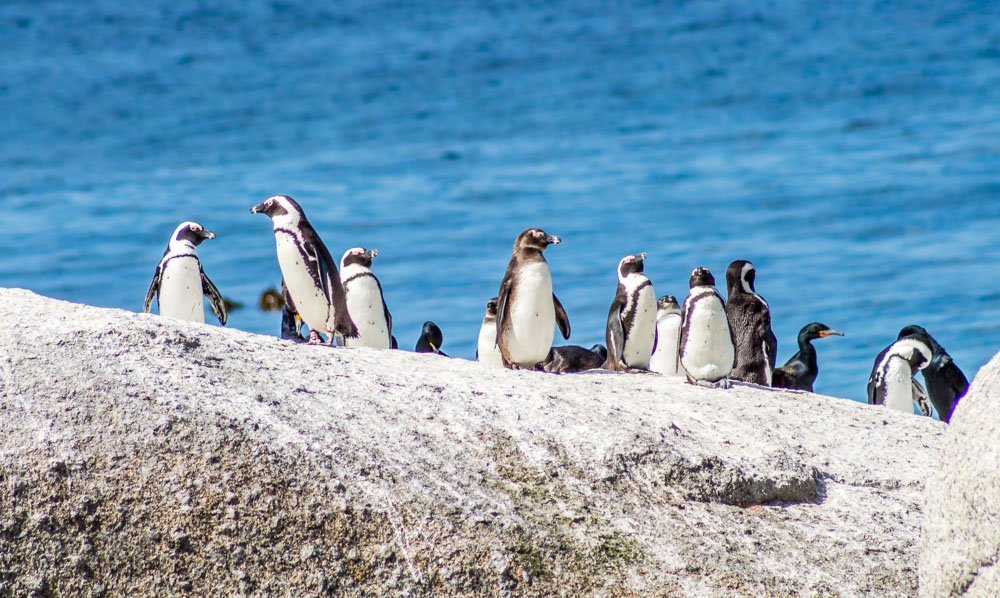 South Africa and Namibia are the only countries with African penguin colonies and a trip to Cape Town is never complete without a visit to the peninsula which includes, Cape Point, Chapmans Peak and the donkey braying Penguins of Boulders beach.

With pristine white sands and calm turquoise seas, hemmed in by gigantic boulders, Boulders beach  is one of the few places one can get close to African Penguins in their smart fashionable attire and waddling glory.

It’s great fun watching them go about their daily business, preening and sunning themselves, guarding a nest, waddling along the sand like an old married couple and then transforming into sleek torpedoes as soon as they enter the water.

The funny name they have gained over the years – Jackass penguin – comes from the braying sounds they make, which sounds exactly like a donkey – scientifically known as an ecstatic display song – the sound a single penguin makes to attract a mate.

Another amusing term used for them is Charismatic Megafauna – I think this just confirms that they are adorable!

The black and white colours are a form of countershading camouflage, the black making them less visible from flying predators above and the white belly making it difficult to be seen from predators swimming below them in the depths looking up. The spots on their chest are unique to each individual and are the main way us humans learn to tell them penguins apart and helps them identify each other.

Although they look chubby, the maximum weight is about 4kg. The males being slightly larger and with longer beaks than the females – they are still quite difficult to tell apart..

The deepest dive and breath hold for an african penguin is 130m for 275 seconds.

Their preferred food is sardines but because of overfishing they are having to change their diets. They never need to drink freshwater – they swallow seawater and sneeze out the excess salt! The pink above their eyes are glands that send blood to help cool down in the summer heat – the hotter the penguin is, the pinker its eyebrow.

Nesting season is March to May in South Africa and November to December in Namibia. They lay two eggs at a time. Both parents share the responsibility of incubating the eggs, taking turns over a 40 day period.

Once a chick has hatched it joins a creche with other chicks while the parents go out to hunt.

When an african penguin has gotten its first waterproof feathers it will leave its colony for about 2 years, usually returning home for their final moult into adulthood, but may join another colony, or start their own.

When a penguin moults, they cannot enter the water for about 3 weeks while they grow new feathers – they go hungry the entire time and survive off of their body fat – I think after lockdown, I can do the same!

While on land they waddle awkwardly, once they hit the water they are like little torpedoes. To swim faster, penguins porpoise by leaping out of the water as they swim. They can jump many meters doing this and with speeds of up to 20km/h – the best human swimmer can probably only jump about 40cm and manage sustained swims of about 8km/h.

They swim faster as they get to the shore, as this is where they are most likely to encounter fur seals, one of their predators. Other predators include killer whales and Kelp gulls which go for their eggs and new hatchlings.

The numbers though have been declining and they have been classified as endangered due to loss of habitat, overfishing, and irresponsible tourism activities. Around 1982 a couple of these guys made this their home – with the boulders protecting the beach from wind and large stormy waves, this turned out to be the perfect little haven.

Fortunately the human residents were also able to speak up for them and  Boulders now forms part of the Table Mountain National Park marine protected area, thus ensuring its beaches stay safe, clean and the penguins are protected.

There’s walkways that one can view the penguins from, a small conservation levy is charged to maintain the area and keep it protected. Additionally there is a sheltered beach area which is popular for families and some of the penguins will swim by, waddle onto the beach or jump in amongst the rocks which of course is a huge crowd pleaser.

Definitely worth a visit and one of my top places to visit every time I am in Cape Town – just remember to check under your vehicle before driving off as they sometimes find shade under the cars.