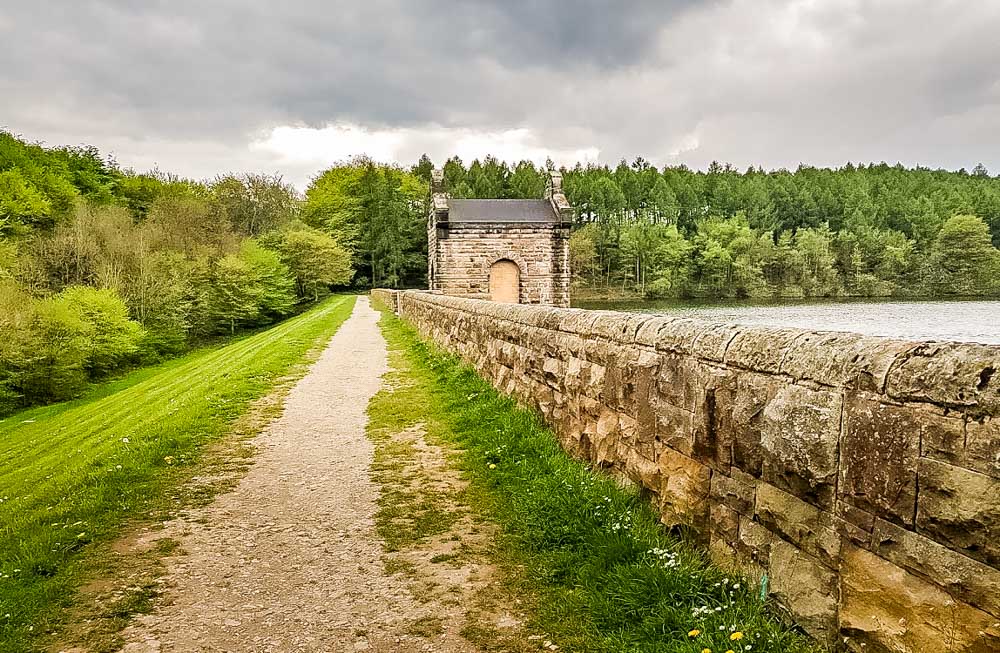 There are 3 reservoirs at Linacre, the Lower, Middle and Upper reservoirs, all built between 1855 and 1904, between them they hold more than 240 million gallons of water.

The upper reservoir is a designated nature reserve and has restrictions on its use such as no cycling and dogs strictly on leads so as not to disturb the established and flourishing wildlife there.

The reservoirs were originally built to supply water to the nearby town of chesterfield but are now non-operational, since 1995 they were managed and run for the use of visitors as a local amenity, and as a thriving and protected habitat for wildlife, as such, fishing is not allowed at any of the reservoirs or the Linacre brook.

The reservoirs are surrounded by fields and bluebell woods. The well established trees make these trails absolutely magical, the majestic oaks and towering beech trees are stunning.

If you take your time while walking through the woods that surround Linacre reservoirs you might spot the intricately carved and inspirational carvings, from subjects such as the Green Man, a fairytale tower or the beautiful owl and more.

You will find yourself daydreaming while walking among ancient woodland, or should I say forest bathing. A perfect habitat for wildlife and is so tranquil, these woodlands are a lovely place to wind down and connect with nature.

There are several walking trails around the Reservoirs and the open water is so calming. The paths are well edged, and you can make up any length of walk that suits your ability and time restraints. Part of the trail around the Upper Reservoir crosses the water on a gorgeous boardwalk, but if you are a parent with young children, you should take care and also keep dogs on leads.

A full circular walk around the reservoirs is roughly 5 miles and mostly accessible by wheelchair or pushchair, the upper reservoir is a little less accessible but can be avoided by taking the diverted route across the middle and upper reservoir where each is divided by dam walls and have signposted trails.

How long will it take to walk around Linacre reservoir?

Well that all depends on your walking pace, but it can be easily walked in 2 hours or so if you want to, longer if you want to take in the scenery and linger a while, there are plenty of routes to explore that will extend your walk, as you will notice as you walk.

There are trails for walking and some permit cyclists and horses. Each route is well marked to show what is allowed. On our visits we usually park at the higher parking area and walk around the middle and higher reservoirs while also taking in as much woodland as possible, this is a slightly shorter circular route that suits our older dog.

The lower reservoir seems to be a little busier due to the popular daffodil walk and the location of the toilets.

The three reservoirs were built between 1855 and 1904 for providing fresh water for the Chesterfield area as it expanded.  On a carved information plaque, we read this information about the history of Linacre reservoirs.  I quote.

Reservoirs are constructed under permission given from acts of parliament.

Until 1909 the water was simply stored and piped to customers. But complaints about taste and odour led to the installation of filters beds. A quote of the time read, ‘The appearance of the public water supply was such that the poor used it as a soup, the middle class for washing their clothes, and the elite for watering their gardens.’ In 1909, water was supplied to 70,000 local people in the area.

By 1995 the population was at least 98,359 residents so today water comes from other sources in Derbyshire.

The woods at Linacre are habitat for lots of varieties of birds including, nuthatches (Sitta europaea,) who’s main habitat is broad leaved trees but will sometimes visit gardens, their diet is mostly insects’ invertebrates, seeds and nuts, the nuthatch is characterized by its orange breast, blue-grey wings and compact build. It has a long, powerful beak with a black streak running across its eye. It has a characteristically large head with a short tail, and it is larger than a robin, but smaller than a blackbird.

Flycatchers can also be seen here, commonly known as the spotted flycatcher or (Muscicapa striata) their main habitat is woodland clearings, parks and gardens, Diet is made up of butterflies, damselflies, wasps, bees, moths, craneflies.

Woodpeckers have also been observed here. The green woodpecker is unmistakable. Its wings are a dark green, with a paler breast and a yellow rump that is most evident in flight. The cheeks are black with a prominent red cap on top. The males have a red streak below their cheeks, but females do not. Green woodpeckers are the largest of the three breeding-woodpecker species found in the UK, their diet mostly consists of ants and other invertebrates and its habitat is made up of woodland parkland, grassland and gardens.

There are also kingfishers and mandarin ducks living around the water’s edge. Kingfishers are as quick as lighting so are a delight to spot while in flight, they can sometimes seem like a flash of green light, common name Kingfisher or (Alcedo atthis) Their habitat is mainly riverside woodland or to give its proper name (riparian woodland,) grassland and marshland. Diet consists of small fish and aquatic invertebrates.

They are very distinctive, Its back is a bright metallic blue and its breast is a coppery-brown. The beak is long and black, though females have a red patch at the base. With a wingspan of 25cm and body length of 16cm, a kingfisher is only slightly larger than a robin, although it is nearly twice as heavy.

Mandarin ducks are very elegant and were introduced from China, now found on park lakes and other wetlands with overhanging trees, mainly in South East England, but also in North England, Wales and Scotland. Where do Mandarin Ducks Nest? The mandarin duck nests in holes in trees, sometimes high up and a long way from the water.

Shortly after the ducklings hatch, the female flies down and tries to coax the young to jump from the nest. Once they have left the tree and made their way back to water, the father will return to the family and help to protect the ducklings.

The parking is located at Woodnook Ln, Cutthorpe, Chesterfield S42 7JW there are upper and lower car parks. The toilets are closer to the lower parking area and just a short walk away.

The site is run and owned by Severn Trent water authority. Chesterfield train station is 4 miles away.

I have been told there is a bus service to the lane using bus number 16/16A from Chesterfield (7 busses per day, and just 2 per day on Sundays) The bus only goes to the entrance to Linacre Reservoirs, and it is a walk of over ½ mile down to the reservoirs.

We have visited Linacre reservoirs a few times now and still have plenty of areas still to explore, although there is no Café facilities at Linacre reservoirs there are plenty of picnic tables spread well apart in some gorgeous locations, it is an amazing area to take a picnic, so long as you always take your rubbish home with you.

I will be spending more time wandering and exploring Linacre reservoirs and I will be packing my binoculars too. I hope I have inspired you too.