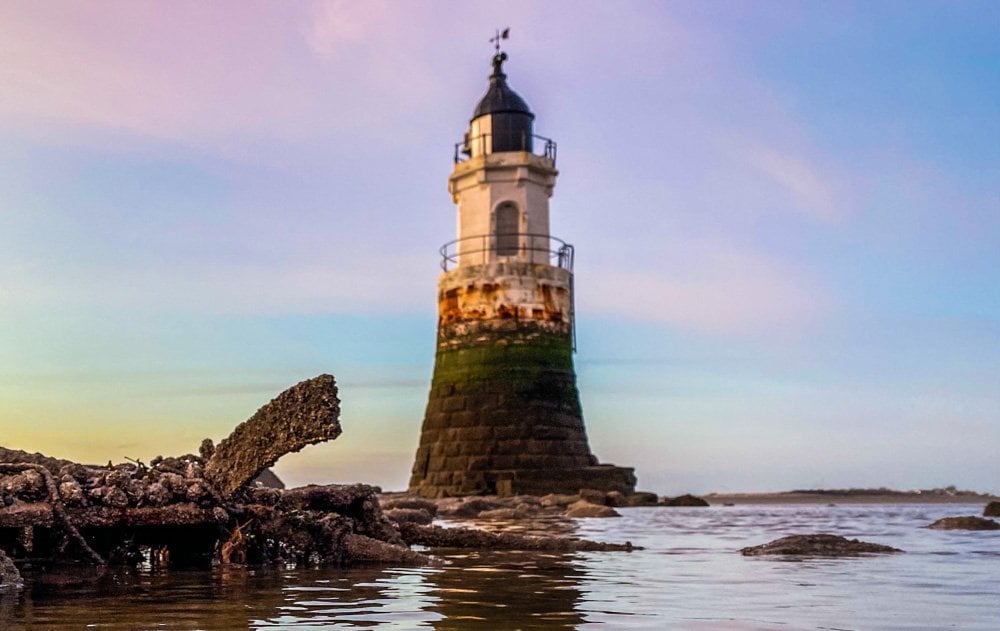 I am a sucker for a lighthouse photograph, I have no idea why I find them so interesting but apparently I do, I think I like the romantic idea of them leading ships to safety. The opportunity arose for me to go and photograph Plover Scar, Lancashire, or commonly known as the Abbey Lighthouse, I was excited to go.

The Lighthouse is based at near Cockerham Sands, we parked up there and then walked the 20 minutes along the coast line.

It was so picturesque, the sun was setting, probably would have enjoyed it more if I wasn’t rushing to get the sunset against the lighthouse. As you walk the coastal trail you will also see Cockerham Abbey, this is where the lighthouse gets its nickname of abbey light house from.

The Site of the Abbey has a beautifully long history, the original Abbey was founded in 1184, as a hospital belonging to Leicester Abbey. Just six years after it was refounded, by a Theobald Walter, 1st Baron Butler as a priory, this was then elevated to Abbey in 1192. Cockerham Abbey, continued through this time period as a hospital.

The original site was built on marsh lands, this was drained, the building became known as St. Mary’s of the Marsh. The Abbey was dissolved in 1539, and was acquired by a John Kitchen. The only evidence of the abbey now is a few pillars of stone ruin, and the Vaulted Chapter House, which was built in 1230 and was used as a mausoleum by the Dalton’s of Thurnham Hall during the 18th and 19th century.

The Chapter house, is now a grade II listed building and a Scheduled Ancient Monument. English Heritage granting 80,000 pounds to help preserve the building. The monument is open to the public on special occasions such as heritage open days.

As you walk past the Abbey you can see the Lighthouse in the distance, we dropped down on to the beach there and walked across the boggy bay to get over the lighthouse, the sun was dropping fast against the horizon, and knowing better than to take my chances at legging it to the lighthouse, mainly because I knew I wouldn’t stay up right, and no one want to be on their back in the mud.

I managed to reach the light house just as the sun was just above the horizon, so managed to get a few of the shots I wanted.

Plover Scar Lighthouse which is also known as The Abbey Lighthouse, is and has been an active beacon since the 19th century. Situated at the entrance to the Lune Estuary. The lighthouse itself is built on a rock ledge that can been seen during low tide. The beacon consist of 8 metres of white conical stone, with a black lantern and twin galleries.

The lighthouse sits 6 metres above sea level and the light can be seen 6 nautical miles away. The light flashes as white light every two seconds.

Plover Scar was built in 1847, as a low light for a pair of leading lights, to lead ships into the Lune Estuary, and Glasson docks and onwards via Lancaster canal. The rear or high light used to stand next Abbey Lighthouse Cottage on Slack Lane. Plover Scar, sole purpose was to mark the edge of a rocky outcrop.

Both lighthouses were originally lit by paraffin lamps mounted on reflectors with the constant light pointing seaward. In the 1950s the paraffin lamps where replaces by electric lamps. By the end of the decade, the lamps were fully automated. In 1985 the high light situated on slack lane, was deactivated, leaving just plover scar, which remains fully functioning.

Of Course, we need a little bit drama in here, wouldn’t be an article written by me without it. So in 2016, the lighthouse was struck by a commercial vessel that was trying to navigate itself to Glasson dock, at night.

Clearly did a bit of a shoddy job, causing significant damage to the upper part of the tower. The light did continue to operate, however substantial reconstruction of the tower went underway with a site on the beach to which over two hundred stone blocks being numbered ready for reuse. The works were completed in May 2017.

Once we had got our shots, we headed back up to abbey, by the time we had reached it we had lost all light to be able to get a decent photo, no matter how hard I tried, I climbed a wall thinking I might be able to get a shot from higher up, instead in true clumsy fashion on my way back down, my foot slipped, and if you can picture a cat who is falling out of tree and they claw in to it  to try and stay upright, now imagine a grown woman trying to do the same thing with dignity and failing miserably.

That, ladies and gentleman was me. Sometimes I wonder how I don’t end up in hospital the amount stupid accidents I have. I have some blue bruises all over my legs, won’t lie I’m glad it’s still cold, so no one but me will see the state of them.

Plover Scar is a beautiful lighthouse with a little bit of history, not only do you get to see the lighthouse in all its glory the walk takes you past the abbey and the history there is beautiful, but the site gives you some truly spectacular views across the bay as far as Blackpool. I would definitely recommend it.

We parked up at Cockerham Sands Car Park – the postcode is LA2 0BB. We just jumped straight on to coastal track there.