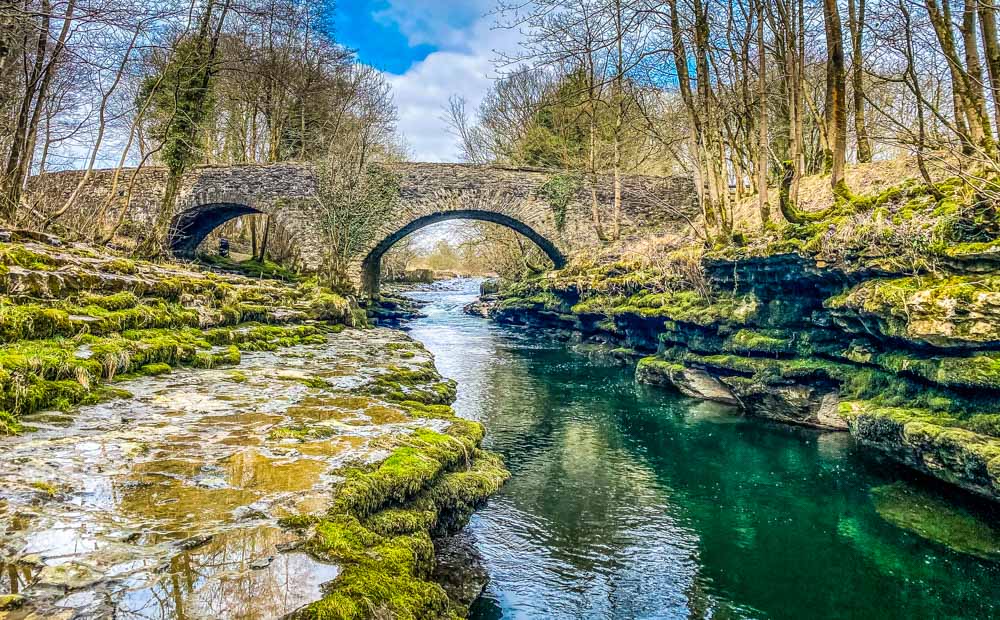 I won’t lie to you, I have been struggling with massive cabin fever recently. We had originally planned to go to Sizergh Castle and Gardens. On the walk over to the castle, we heard the sounds of crashing water, whilst walking over Hawes Bridge.  Well, let me tell you, that sound is like a beaconing call to get the camera out and go and explore.

We have been trying to get out with the two kiddies as much as possible, basically to save my sanity and stop them from winding each other up. When we reached Hawes bridge, we saw the water thrashing, that sound is just heavenly.

So of course, before I knew it, I’m behaving like action man, climbing down on the banks with the camera. I need to remember that I honestly lack every quality that a human requires to stay upright, because I had a few close calls, to say the least. However, the water was crystal clear, and thrashing against the bridge, I was in my element. Within all of 0.5 seconds the castle was the furthest thing from my mind, and we had found the place to stay explore for the afternoon.

Starting our walk, from Hawes Bridge, just stepping down on the side of the banks of the River Kent. Hawes Bridge is something to see in itself, this beautiful old stone bridge with its sturdy pillars, with the water crashing against them.

The bridge, is from the 18th century, made from limestone, the result is stunning. There is a rather dark local legend, apparently Sir Charles De Leyburn of Cunswick Hall, washed up there, after being murdered and thrown into river by his son who wanted to come into his inheritance so he could marry, the legend then goes on to explain that once the body of his father washed up, his son, Roger committed suicide and now haunts Cunswick Scar.

So even through all the beauty that this place holds there is a dark history, which the geek inside me loves.

After stopping for probably felt like an eternity for the rest of the family, we got onto the track, which was horrendously boggy – never been so happy that I got walking boots for Christmas!

We walked along the banks and around every bend there was another exceptionally stunning scene, to the point where I remember thinking, this doesn’t even look like England. It really was the walk that just kept on giving. The water the whole way along was so clear, people swimming in the natural pool, dogs running in and out of the water. I mean I don’t fancy it in early spring, but might give it a go in the summer.

The kids were happy exploring and getting sticks and skipping stones, we walked down to what the locals call the Wobbly Bridge – they were not kidding, very literal name. Ok, so I’m the first one to admit that I am a WHIMP, when it comes to heights, I am happy up a mountain because it’s solid, up over water on what is essentially a wooden suspension bridge that literally moves under your foot….nope!

Put to shame by a 2 year old and 4 year old who didn’t blink an eye, and with my partner pushing me along, and laughing at me. We got to the other side of the river. And continued along the track heading back towards Hawes Bridge.

On this side of the river there is Kendal, Caravan and Motorhome Club Site, which you will pass through on the other side of that, is Sedgwick Gunpowder Works. The inner geek was jumping for joy for the second time on this unplanned walk, I felt like I had hit the jackpot.

In 1857, the company was formed to manufacture gunpowder on the site of the western bank of the River Kent. They cleverly used the force of the river to power the mills, there was a wooden dam, across the river at the north end which diverted the water, towards the long, stone purpose built head race, which in turn ran through the mill and into the water pit, this was where the waterwheel drove the incorporating mills.

The company itself did not flourish at the beginning, however, after about ten years they were bought by a Mr Henry Swinglehurst. The company then did flourish eventually employing around 50 people and producing 20 tonnes of gunpowder in a week.

When I was researching the site, whilst writing this article, I found out that before the First World War (1914 – 1918) at least half of the gunpowder produced in England, was produced by five sites in a 30 mile radius of the Crook O’Lune. Which is pretty incredible.

After the war, there were new methods to produce Gunpowder, a larger company called W.H. Wakefield & co, began to take over this little groups mills. It was then sold off to Imperial Chemical Industries Ltd. In 1935 the mills were closed and cleared. By the time of the Second World War the buildings were requisitioned as a munitions store.

The Mills is now under the management of The National Trust. The head race is still there and have some really beautiful little over flow spouts still working today. For me, especially to see that history, makes a site like that, so special.

We continued along the path that’s takes you pretty much the full length of the head race. That leads you back to the dirt track heading to back to Hawes Bridge. It winds beautifully with the river, taking you through a sheep field, and dropping you back down on to the dirt track, into the woods and back up the over side of the Bridge.

It’s a picturesque, gentle walk with something for all the family. Roughly about six miles from start to finish, and absolutely worth a look. I love anywhere that has fascinating history and natural beauty and this walk offers both.

The Post code for Hawes Bridge, DL8 3QF. There is a car park there which is small and only has maybe six spaces maximum.