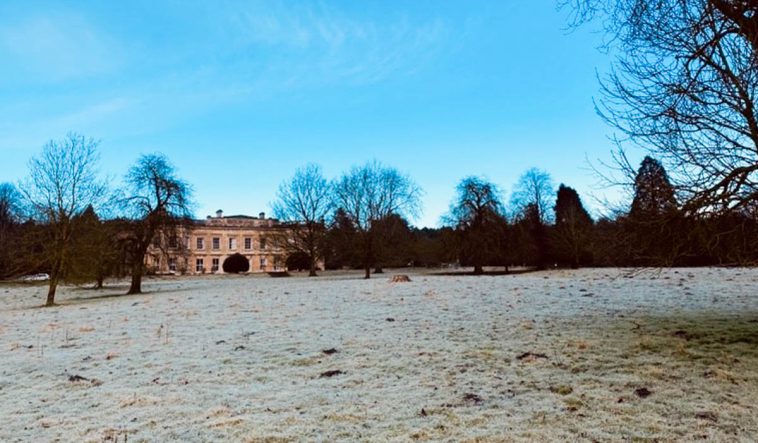 A short drive from the small town of Pocklington, nestled in the rolling Yorkshire Wolds is Kilnwick Percy Hall, a glorious example of an 18th-century hall and gardens. The hall is now home to the Madhyamaka Buddhist Centre but luckily for budding walkers, the extensive grounds are still open to the public. Kilnwick boasts an ancient history, with Roman and Saxon ties, connections to William the Conqueror and archaeologists have uncovered artefacts from as far back as the Mesolithic period, around 8000 BC.

Set back from the road, if it wasn’t for the cars parked along the side, it would be easy to miss. So on a beautifully frosty January morning, we set out for an adventure.

We parked at the entrance and were faced with two options. The solid tarmac road that leads into the centre, or hopping over a style and romping across the uneven (and icy) grass. Of course, we went with that option and what a great decision that was! After navigating our way across the open parkland, wading through mud and sliding gracefully (or not) down a hill, we discovered a beautiful frozen lake. The human-made lake covers six acres, and we followed the circular path that took us on a tour of the hidden treasures of the gardens. I can just imagine returning in the summer when the plants and trees are in full bloom, though even in the bitter wind it did not disappoint. The lake was used during the 19th century for ice hockey and skating.

We ended the circular walk and continued across the parklands towards the hall where we got an up-close look at the beautifully constructed house. The hall was utilised by the army during World War II for mail sorting and for ‘top secret’ D-Day training. Guided tours of the hall are available for visitors but of course, are currently suspended.

As previously mentioned, Kilnwick Percy Hall is now home to the Madhyamaka Buddhist Centre and dotted around the grounds are residential areas for retreats and for volunteers of the centre, which claims it to be a ‘ relaxing place of peace and tranquillity to rest and reflect’. Having spent the day there, I totally agree with this statement!

We went through an iron gate and into an open area of grass at the back of the hall where there were picnic benches dotted around and some basic children’s play equipment. There was also a beautiful dog-friendly wooden lodge that offers a warm place for families to shelter and enjoy a picnic. Of course, no winter walk would be complete without a trip to a cafe and Kilnwick Percy did not disappoint. A major attraction of the centre is the ‘World Peace Cafe’ which serves a huge selection of vegetarian and vegan food (including yummy cakes) and is run by the friendly volunteers who reside at the centre. We grabbed a hot drink and headed for the picnic benches to finish our adventure overlooking the stunning parklands.

Kilnwick Percy Hall and Madhyamaka Buddhist Centre proved to be a hidden gem, set against the beautiful wolds backdrop and providing us with an exciting and new location to explore. We will definitely be back to explore during different seasons! If you’re ever touring the Wolds, do not miss out on a trip to this historical masterpiece.

a student at the University of York and a mother of two. I spent my childhood travelling all over the world with my family which has left me with a desire to travel and explore with my own children. I am passionate about conservation and protecting our environment for future generations by sharing the wonders our world has to offer.