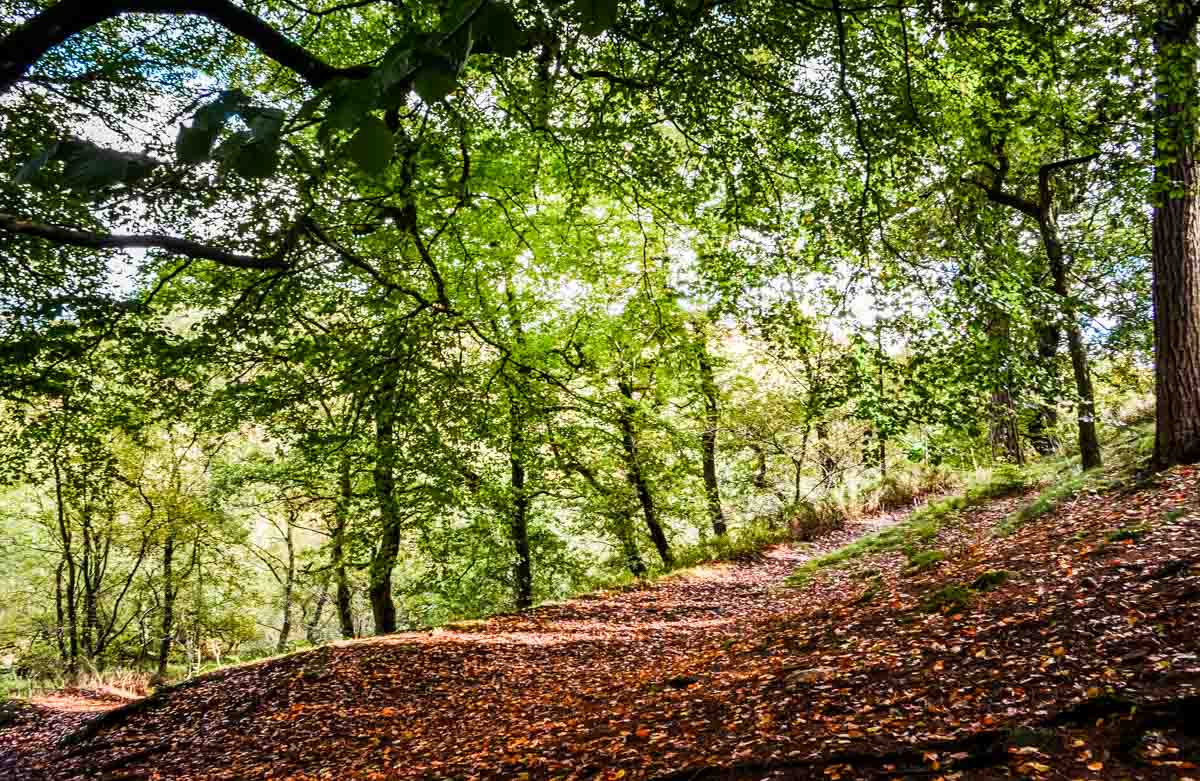 Luds Church, as it’s known, is close to the Roaches, near Leek. The actual location which can only be reached on foot is in the Staffordshire Back Forest within the Dark Peak region of the Peak District.

Not actually a church as we know it, but an 18-metre-deep chasm that’s covered entirely in rich green mosses and ferns and is a wonder to experience.

The length is just a mere 100 metres but there are crevices leading off from the main chasm to explore if only briefly since they don’t extend very far.

The deep split in the Roaches was caused by a historical landslip.

Luds church history is steeped in myth and legend, this has fascinated generations of people throughout the ages and is known to have been used as a place of worship since at least as early as the fifteenth century, usually by those who would have at that time be persecuted for worship, such as the Lollards, followers of the early church reformer and so-called ‘heretic’, John Wycliffe.

Thought to have been used as a hidden place of worship at some point, it is said for pagan worship too.

This quite hidden location has been mentioned in different texts and legends for being a hide out for Robin Hood and Friar Tuck while hiding from the law. The area is also said to be haunted by the daughter of a Lollard preacher who sadly died accidentally in the area while she was making her way into the deep passage to worship one day.

We had been hoping to make a visit to Luds church for years, but had never actually gotten around to finding the location, until this year, inbetween lockdown 1 and lockdown 2.

Our daughter had been online looking at places to walk and spotted Luds church location map on some online maps and asked if we were able to get out for a walk and explore the area.

This was something we’d be wanting to do for so long, and it seemed like a lovely idea for family time outdoors, fresh air and relaxation. Our daughter guided us all the way towards Gradbach nr Buxton.

There’s a car park in the area, the Roaches carpark and a certain amount of roadside parking, but be considerate when parking, the lanes are narrow so only park where it’s viable and causing no issues to others.

There is a map of the area that would be useful which is OS Outdoor Leisure OL24.

The whole area is gorgeous, a picturesque location in itself so even if we hadn’t discovered Luds church, we would still have had a wonderful family walk in the countryside.

Firstly, we booted up, and I would highly recommend that you wear sensible footwear when visiting.

We discovered lots of sticky mud whichever route we took, and we started off with a walk along the river Dane, an extremely muddy field walk with cows in it, luckily they had wandered into the adjoining field at the time, but had left their presence behind if you know what I mean, cow pats everywhere, I was glad to be wearing wellies!

Some parts were so deep in mud, I nearly lost a boot in one section, but it’s all part of the fun! The river Dane, runs through Staffordshire, Derbyshire and Cheshire, it is a tributary of the River Weaver that originates in the Peak District.

The River Dane is the longest, cleanest and thought to be the fastest flowing river through Cheshire. If you’re interested in walking the Dane Valley Way, there’s a walk that mostly follows the riverside as much as it can from Buxton through to Northwich, walk is roughly 48 miles from start to finish and covers some stunningly scenic countryside along the route.

Our daughter continued to map out our route for us and we gradually started taking a gradual upward direction along a quiet lane until reaching the location of an old converted mill, the public footpath tracks through the courtyard and past a cafe, most know it as Luds church cafe, where we had a discussion about buying takeaway coffees, it was decided that we would make a stop off on the journey back down.

So, continuing along the track, now narrowing considerably and much less accessible at this point, for instance if you are a wheelchair user this would not be a possible route. Narrow Stiles too, just for your information.

This part was only a short section and after another stile the track to take is to the right, it gets difficult to figure out at an intersection where there are three options, none of which mentions Luds church on the sign posts. Luckily our Jem knew exactly which way to go. We call her our Jem Nav, she’s a great navigator.

From here on the trail, still close to the river, takes a turn further up into Back Forest and the woodland is just beautiful. The trail is a gradual winding route up through the trees, and beware of the muddier sections.

So long as you continue the trail leading up and don’t don’t veir off anywhere you’ll arrive at the entrance to the moss coated, fern covered chasm that is known as, Luds Church.

I would imagine this area is less popular during a mid week visit and you would have more peaceful moments in this special place,  there certainly does seem to be a kind of tranquility there, the kind of quiet reflective atmosphere you might expect in a regular church, it is easy  to imagine it being revered as a place for worship.

The area has a place in Christian history since 15th century as earlier mentioned with the Lollards, when they were being persecuted for their religious beliefs.

This beautiful place has been used as a filming location although I’ve yet to find out what exactly was filmed there.

There’s also speculation on whether  it is the place mentioned in the medieval poem, Sir Gawain and the Green Knight scholars debated the dialect and came to the conclusion the dialect was that of the North-West Midlands on the Staffordshire/Cheshire border, Lud’s Church in the Staffordshire Moorlands was suggested by R. W. V. Elliot as one of the key settings for the climax of the poem’s story – “The Green Chapel” On our visit it seemed to be a rather popular place, and not much time to spend walking through the narrow pass so not to keep others from viewing it too.

A circular walk is possible but our day involved a return walk and via the café for take out coffee and lemonade to drink at a picnic table beside the lovely river Dane.

I would like to return again one day, maybe a midweek wander with perhaps more time to take in the atmosphere longer and maybe even take the circular walk for a longer day out, who knows. Sometimes these trips are quite spontaneous, but usually we come prepared anyway, a small rucksack with water and first aid, my camera and boots of one kind or another.  You will definitely need sturdy footwear, even wellies as I did, the entrance to Luds church is a bit steep and in wet weather is quite muddy in places and slippery.

Near one end there’s an old log covered in pennies and other coins, I imagine to make wishes and such, it’s quite sweet. I’m glad we made the effort to visit this beautiful place, it was a lovely family outing…getting outdoors is an uplifting boost.