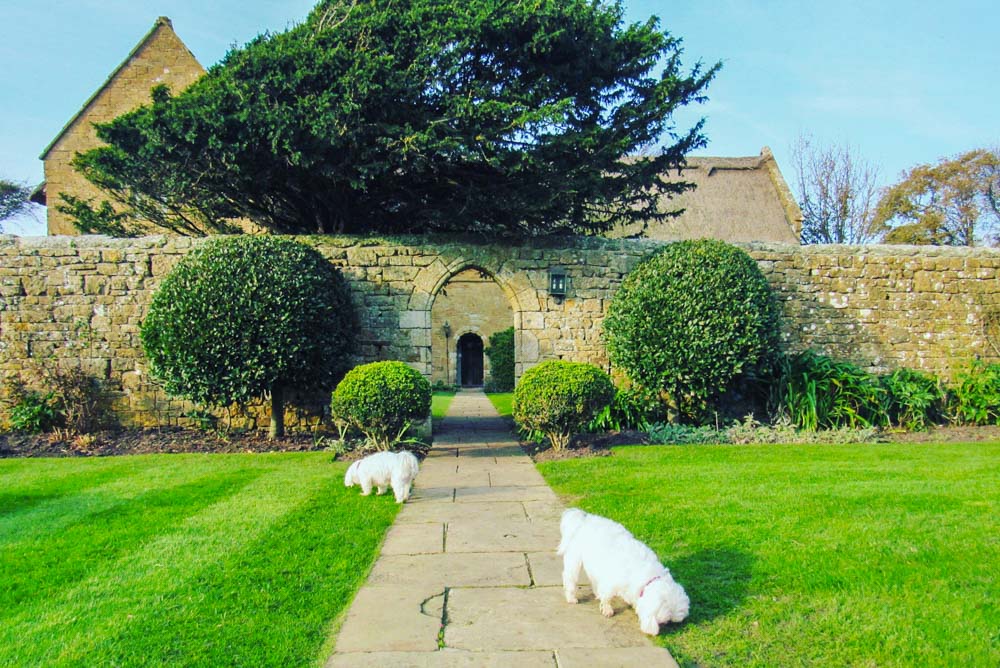 Bailiffscourt Hotel is a beautiful haven located at Climping on the West Sussex coast.  If you are looking for a luxurious stay in a truly dog friendly hotel then this is the place to go.

At first glance you would think Bailiffscourt had been standing there for centuries. It was commissioned by Lord Moyne, previously Walter Guinness of the brewing family in the 1920’s for entertaining guests.

However I am told many of its features have been reclaimed from other Tudor buildings, which is why you would be forgiven for thinking it is medieval.

The hotel has 39 rooms which are all dog friendly, which in my opinion makes the booking process so much easier. These are set out in a series of houses and cottages in the manicured grounds.  They are linked by secret castle style passages, lavender filled pathways and courtyards.  This gives the feeling of being cozy and secluded even romantic.

On arrival my Maltese terriers Pixie and Tinkerbelle were greeted by the smiling faces of welcoming staff genuinely happy to meet them.  I was told dogs are free to roam everywhere except the spa and the restaurant.  Also to keep an eye out for the resident peacocks which strut around the grounds and are fascinating to watch.

There is an additional cost of £25 per dog and they are provided with a bed, towel, bowl, treats and poo bags.  Meanwhile the humans get a beautiful bedroom which is luxurious while remaining traditional, with a real log fire (instructions included) and special touches such as home-made biscuits. The bathroom has a beautiful rainfall shower with plenty of Temple Spa products to try.

At this point I was torn does dog mom go to the award winning spa or take the dogs onto Climping Beach which is just 5 minutes along a footpath. The beach is pebble so reception checked for me when the tide was out so their little legs could have a good run about in the salty air.

So off to the spa and wow so tranquil built in the style of a Sussex barn, all timber and huge windows which brings the outdoors into the indoor pool area. My favorite though had to be the heated outdoor infinity pool and sitting back in the bubbling Jacuzzi staring at the countryside.

After a refreshing 30 minute massage aptly named “drift away” I put on my fluffy white robe and went back to the room to check how the doggies were doing.

Before dinner sitting on the extensive lawns with a gin and tonic in hand, watching the sun go down was a perfect way start to the evening. As dogs are not allowed in the Tapestry restaurant staff are happy to make up a table in one of the lounges so they can join you. The menu was seasonal and ingredients locally sourced and all delicious. The wine list was the biggest I have even seen so I just asked for a recommendation and again staff are happy to share their extensive knowledge.

My final thought on Bailiffscourt is that it is a beautiful countryside retreat. There is just something about it that soothes your soul and quietens the senses. I would recommend this special place if you want to escape for a weekend full of sea air, good food, spa luxury and best of all it is genuinely dog friendly.