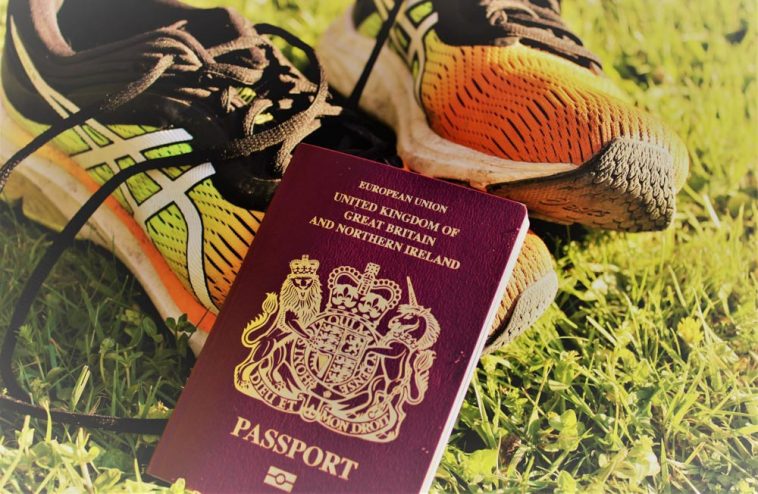 Marakami’s – “What I talk about when I talk about running”, inspires us to think beyond the distance, pace and location and consider our connection beyond the act. As a runner, I relate deeply to this, and find my way of thinking about running also translates to how I contemplate my travel stories.

My first experience of choosing travelling was a month-long exchange in America when I was 16. My British brain had only sampled 1980’s camping. Being rounded up with my sister and sitting in our white 1981 Lada for hours, only to unpack the contents into a make-shift home. I hated it. So, by the time my opportunity to travel to the USA came calling, I was eager.  It did not disappoint with its; people, food, cities, music, sport and culture. My eyes, ears and mind had been opened. My senses became alerted to the new, and this is what I talk about when I talk about travel.

I consider the lines “I dislike feeling at home when I’m abroad” by Irish playwright George Bernard Shaw to summarise why I think this way about my travels. At home can become muted and the very notion of being surrounded by unfamiliar sounds, sights, people, tastes and smells, is what I love about travelling. It is knowing that our daily routines can be placed on hold, our conversations can become refreshed and that we might feel full again. It is the ultimate in learning experience.

My commentary, like my experiences, uses the five senses. Our representational system: Auditory, Visual, Kinaesthetic, Taste and Smell, accompanies us on every journey we have and fuels understanding and memories creating for us, our experience. 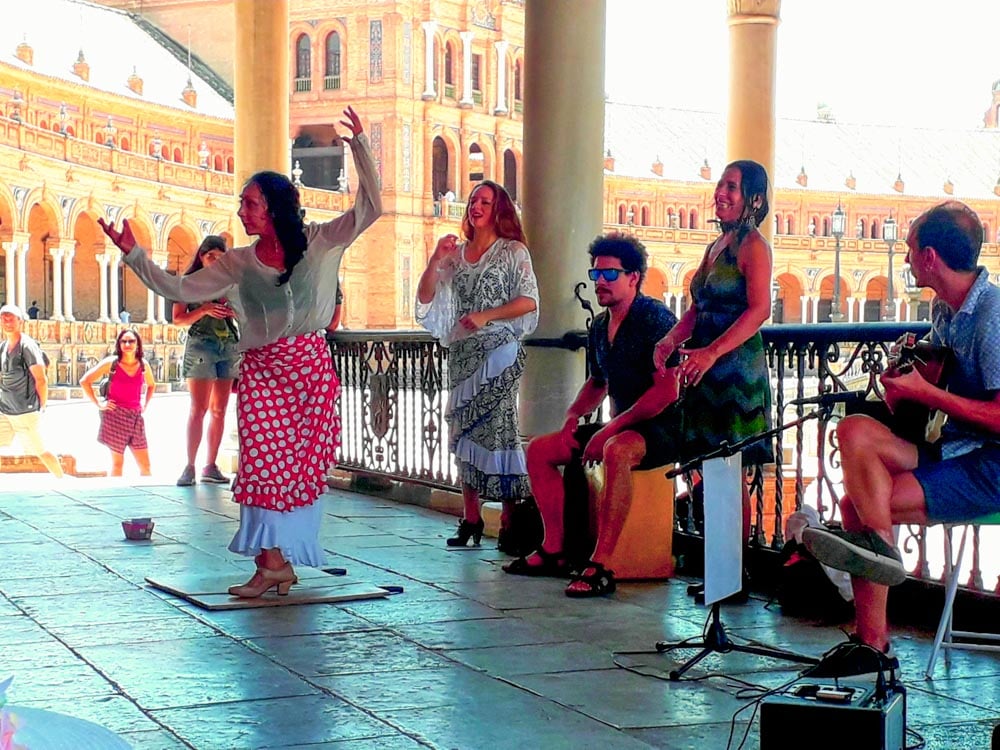 I learnt Spanish as a child, it is part of my family heritage and I intended to keep it. Spain and to be Spanish was wrapped my mind by the drama and beauty of its composition. By the time my daughter Cora was born in 2000, her ‘Everyday words in Spanish, words and pictures book’ became a favourite and we would often read and count aloud the number of tomates en la cocina together. Travelling to Spain to experience its great culture also became an opportunity to practice the vocabulary. We travelled to Barcelona as a mother/daughter trip in 2009 and took a motorcycle excursion with a guide to experience some of the famous sights and local places. The vocal interactions of broken Spanish to discuss our tour made us feel included and less of a tourist.  There was something quite comforting about understanding the language and being able to join in local chat at an easy pace as we stopped at a taverna for tapas. We discussed the tour and the history of the city. We listened to the humbled tonality of peoples’ voices and became engaged in their stories.  Eavesdropping the intense tones on matters appearing of great importance in another language is often symbolic by it hand gestures and facial expressions.

On a return trip to Spain, this time to Cordoba, the evenings were graced with local families venturing out in the cooler evening air as street musicians encouraged children to dance. The sound and talent of the Spanish guitar and Andalusian flamenco was fantastic. To witness the raw origin of traditional Spanish dance and music that is performed without purpose, other than to be enjoyed, echoes sounds associated with travel.

I would have no desire to sit at a café at the side of the street in a UK city as traffic rumbled by. Yet abroad, we humbly gather at tavernas that spill onto the streets as bikes, delivery trucks and taxis chug passed in stereo. It is a rhythm of life that I want to be part of when I travel. The choice to sit among the tempo of strangers far outweighs the desire to be anywhere else.

In 2005 I was lucky enough to visit Japan with Cora. We arrived in high-rise Tokyo alone and had five days before meeting others out there.  Aside from the language barrier, the custom of bowing was phenomenal to a 5yr old, who initiated it quite regularly. It was far beyond what we could have imagined. Our first afternoon of wandering, we watched crowds of varying age groups flock to a large sporting arena. Without any knowledge of what it was, we followed them. Along with everyone else, we queued orderly for our tickets, which also came with a box of food and made our way to the grand entrance of the arena. We soon discovered there were no chairs, only a mat on the floor inside low level railings.  We had entered a sumo wrestling hall and the tournament was about to start. There were no western letters written on anything, onlookers bowed, nodded their heads and smiled at us, as the only Western faces there. I often think about this experience when I talk about travelling.  As the opening act arrived on stage, multiple Japanese men with naked chests and black flowing pants stood before tables piled high of cabbages, equipped with Samurai swords. Drums started and flags flapped as the debris of cabbages flown in the air commenced. I have never seen anything like it ever again. It became the highlight of the trip and a tale that is easily told.

I wanted to express how our stories from travelling can inspire others as we describe the scenes of loved ones being greeted at the arrivals’ hall in the airport, or a gecko lifting its feet off hot sand. It is about how we share our vision of the world and our depth of field that enables us to consider far and near landscapes. We respond to beautiful and dramatic sights, some with motion, others still. We laugh, admire and reconnect with our childhood spirit and with our loved ones. I recall landing in Innsbruck, Austria and disembarking from the plane. As I walked across the runway whilst surrounded by the panoramic view of mountains.  I was not only astonished how the pilot had navigated through such a rocky pathway, but how small the plane looked against the backdrop of these giant peaks. As beauty incorporates many things, it is evident that what we see when travelling motivates us. It provides the basis for fascinating conversations and allows us to recall memories, humour and associated feelings. 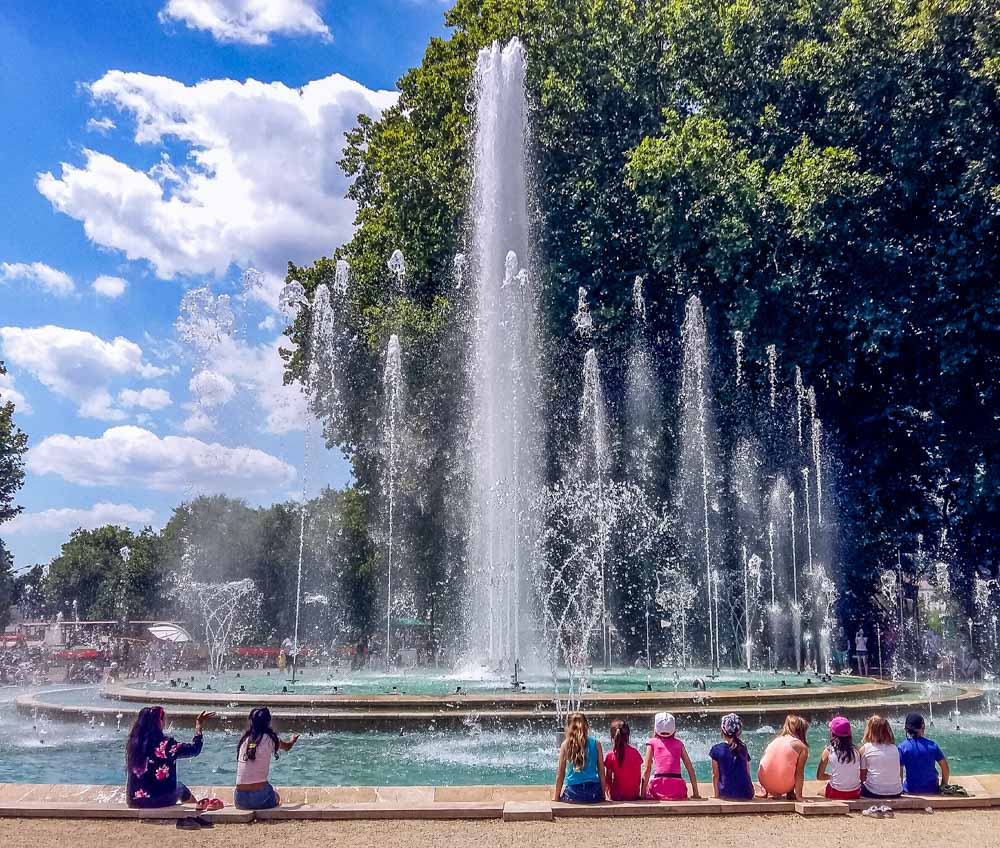 Cora and I have shared many trips together and with much amusement of the family, share a similar mission to experience as much of life as we can pack into our travel itinerary. We are not powered by adrenalin, more by squeezing in “101 things before breakfast”, is often the phrase.

In Budapest, we explored Margaret Island and as Cora was having driving lessons back in the UK, I arranged for her to drive a golf-buggy around the island. Its popular green escape with water fountain displays were synchronised to music as families sat in the sunshine. There was one small road in and out of the island hosting minimal traffic.  We were given our brief and took refuge out of the heat under the shade of the buggy canopy.   We mastered the narrow grassy lanes where people wandered and overtook a few small vehicles.  The top speed was no more than sprint pace, but enough to capture the sights in the hour we had. Having reached the far side of the island, we reached a white barrier on a small lane. The small car in front went through as the barrier lifted and we tailgated it. But it was not long that we realised we had now left the Island and had re-joined major vehicles heading towards Budapest city centre!  Human behaviour always makes good conversation and the subtle bond between humans often adds value to the richness of storytelling.

When I talk about my travel experiences, it can bring me to a fit of laughter I possessed at the time and I can remember the feeling of panic as I run across train platforms to catch the right connection and my aching legs from the steep steps in Madeira. But I like to absorb more than just what my input channels see, hear, feel, taste or smells, so I attempt to emphasise the minutest detail in my stories to recreate the experience and bring back the memory. In 2006, I visited Iceland with Cora and we spent time at the geothermal spa known as the Blue Lagoon. The ambience of that place with cold mist that hovered over the hot pool water meant those around you were either hidden in the mist or blurred. The correlation between images and sharing knowledge has enabled me to think differently about a more holistic travel experience.

The shared experience of eating and drinking is often associated with Mediterranean flavours, smells and exquisite dishes, often associated with ancient family recipes. We love salads in our family and eating on holiday is always a pleasure and I love the local produce, supporting local people and it being cooked in the way they have done for centuries. The fruit in countries like Spain, Italy and Greece seems to be bursting with sunshine and its flavours thrilling to the taste buds. Olive oil and fresh bread that melts in the mouth, cheeses that you want to savour and wash down with local wine.  I try to capture the flavours of travelling and recreate them back home – but it is never the same. From the markets in Barcelona to the warm herbs and spices sold on the streets in Mumbai, the air has an essence that I can only try to describe when I talk about travelling.

Since I first started my travels, I have observed increases in humanitarian violations and natural disaster, in unprecedented rise around the world, but lately more traffic of people taking refuge across the Aegean Sea.  The migrant crisis has affected how we talk about our travel experiences. My visit to Kefalonia in 2019, marked the first time my conversations had featured the migrant crisis and its effect on tourism, which was echoed in shops, café and by restaurant owners’. It is a reality of the modern age and in years to come, overcoming this Covid-19 pandemic will certainly influence our travel stories.  I can recall riding a moped along mountainous roads, feeling the warm breeze and experiencing the freedom that discovery gives me.

I am fortunate to explore for the love of it. But note the urgency and despair that some face when traveling. “After nourishment, shelter and companionship, great stories are the things we need most in the world (Phillip Pullman)”, I have had many great experiences and choosing to share my tales with the vibrancy of my sensual journey is what I talk about when I talk about traveling.