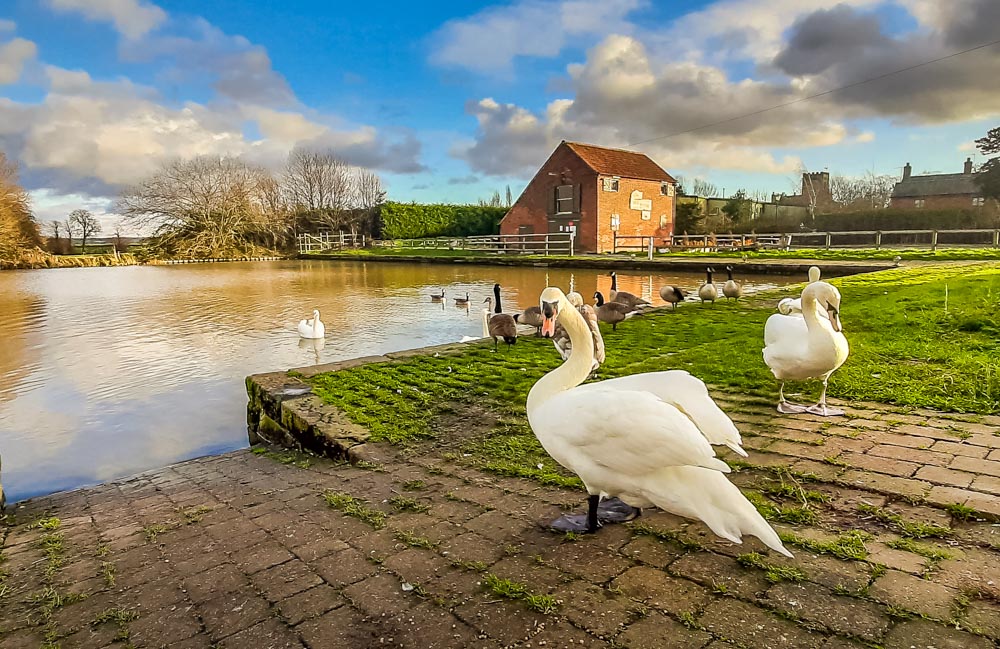 A bright and sunshiny winters day walk, an old favourite location and good company, a perfect combination. Hickling basin has been a spot we have returned to for walks and cycle rides for many years now in summer and winter, there’s so many good memories here. Hickling village is in the district of Rushcliffe in Nottinghamshire with the post town of Melton Mowbray, well known for its pork pies!

Hickling basin is a very wide part of the disused Grantham canal, it would have been used originally for the loading of and mooring of goods barges when the canal was in full use. The canal is currently very popular with ducks, geese and swans, walkers, cyclists and fishermen. The bridge over the canal was taken out when it was no longer needed, I heard stories of coaches going over the humped back bridge back in the day, and passengers having to get out until the coach was across the bridge, I have no idea whether this is true! There are plans to reinstate a bridge in the village if the canal is put back into use, the swing bridge would facilitate navigation again.

I enjoy taking relaxed walks beside the canal sometimes, and on this occasion the weather was very uplifting and the feeling of the day, very upbeat. I wore my walking boots because I know from experience that a detour from the tow path could mean a muddy farmers field. The tow path is well kept and accessible plus there are other public foot paths leading from the canal to change the route somewhat if you chose to. We took some mixed corn to feed to the ducks and swans, they seemed to enjoy the treat, but I feel they’re a bit greedy perhaps because they do get well fed here. The grain did go down rather well though! 😊

We took the tow path almost directly next to The Plough Inn and continued in a leisurely fashion along the tow path for a while until reaching a gate beside the next bridge on the canal. Taking a right turn, and dog back on his lead, we walked through the next village, Kinoulton village. The village is thought to have Saxon origins and the settlement would have been nearer to the Roman fosse way, which is now a trunk road, A46.

Our circuit took us through the village a short distance, it was lovely to see how well kept the villages are here, such a pretty area to walk through and the history is interesting too. Over the years the size and location of the village changed as is normal through progress, though some reasons for the movement as said to have been by way of avoiding the plague, some say possible risks from highwaymen on the A46 back in the day. Mostly a good reason to move further down hill toward the Vale of Belvoir was after the opening of the canal in the 1790’s making transport links easier and more profitable, the canal linked the town of Grantham with the river Trent in Nottingham.

The only remaining pub in the village is The Nevil Arms, and there has been a pub in this location since the 1860’s only the name has changed. The other two were the Bull’s Head and the Volunteer. Nearby is the village sign set in the middle of the green, Kinoulton, very useful for passing walkers. From this sign, our route took another turn to the right. This part of the walk has only partial paths and the grass verge had to be used occasionally and Bandit stayed on his lead. After a while there is a public footpath to the left which we almost took to expand our walk further, but maybe next time.

The fields looked beautiful on this winter’s day, the way the sun played on the puddles making reflections, the bare exposed tree silhouettes and the blue skies above, with just a few billowing clouds around, making such a beautiful scene.  Simple details and fresh air on an upbeat and cheerful walk makes all the difference sometimes, it’s not always the distance or the glamorous location, a basic uplifting stroll can be a big mood booster.

Those are my favourite reasons for walking. I find canals can be such lovely places to wander and maybe take a side route to explore the area further. Peaceful places, good company and feel good vibes, a mood boosting experience wherever the day takes us is a big plus. This is one of those locations for me to simply rewind and relax.