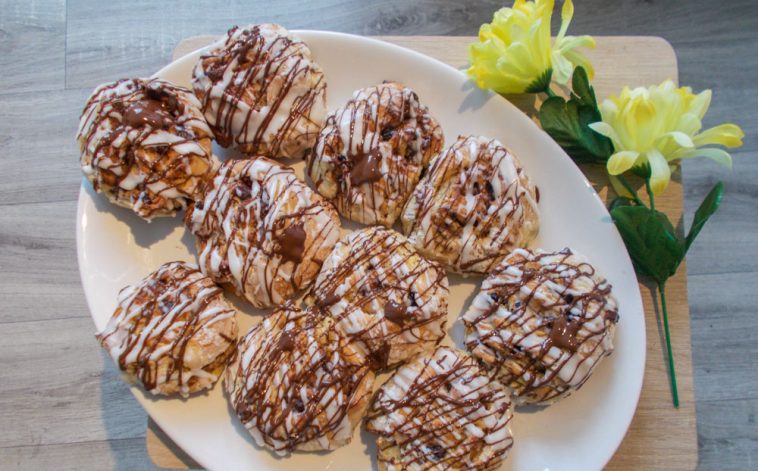 Ever since I went to Florida with my family when I was little, I’ve been a bit obsessed with cinnamon rolls. I remember passing by a shop that sold them and being hypnotized by the gorgeous swirl and the sweet scent of warm butter and cinnamon. When I decided to go vegan, I knew I had to experiment with making a plant based version and these cinnamon rolls are delicious! Made with a rich enriched yeast dough and filled with a chocolate, cinnamon, raisin mix these rolls would make a great sweet treat with a cup of tea, a indulgent grab and go breakfast option or a real show stopper for a party. 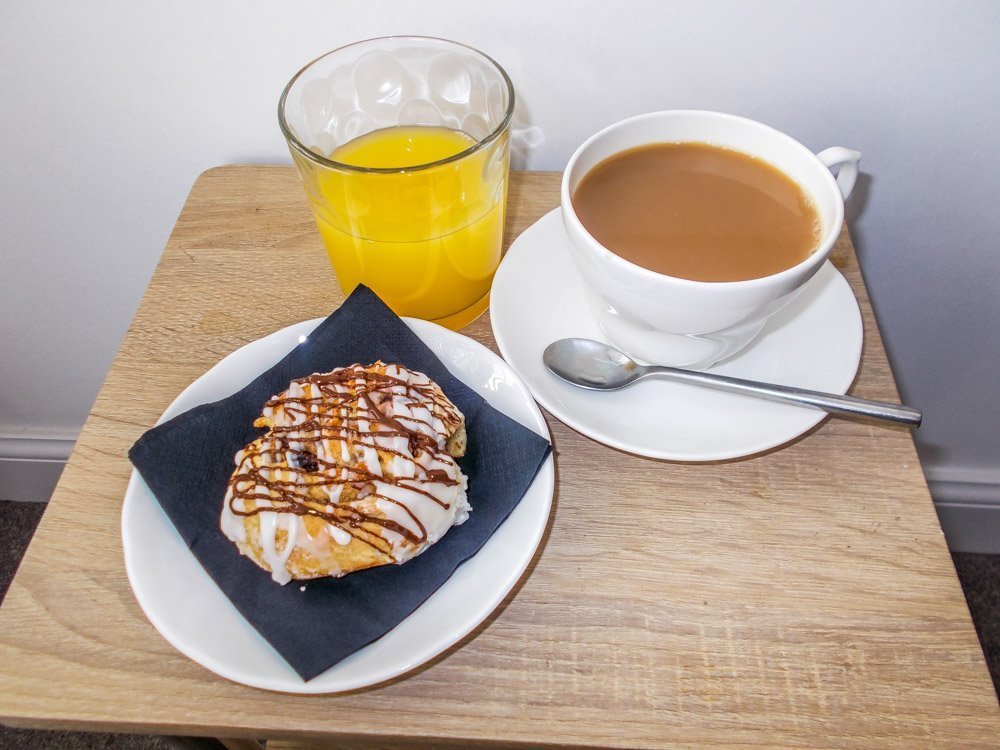 I decided to add chocolate inside the swirl and on top to make them a bit more indulgent but other great options would be to top the bun with flaked almonds whilst the chocolate on top is still melted and leaving them to set, or removing the chocolate all together, adding orange zest into the cinnamon sugar mixture and then brushing the outside with melted apricot jam when cooked (kind of like a chelsea bun). If you would like, you can always cook these in a round baking dish instead of a rectangular one like I have done and if the buns are close enough, it would make a great “tear and share” piece for friends!

The recipe calls for a plant milk, I used almond as it was what I had in the house but feel free to use oat milk (which is said to taste the most like cow’s milk), soy milk (I think this is the creamiest) or even coconut milk (which has a lovely coconutty taste) to name just a few. The recipe also calls for vegan chocolate. Cadbury’s Bournville is a an easily accessible option, Lidl’s Simply Dark Chocolate is not only delicious, but super cheap and all the big supermarkets have their own labelled vegan or free from chocolate – just have a google to find out what your favourite supermarket has to offer.

I’d say you should be eating these within 3 days before they start to go a bit hard, but if you feel they aren’t already soft enough, just stick them in the microwave for a few seconds – good as fresh! If you want to use these for a breakfast, just batch cook the recipe, freeze what you will not eat at that moment and get one bun out the night before you plan to have it for breakfast.

I wish I could say these were for the health conscious but alas, they are not! But a little bit of what you fancy is good for you, right?

250ml plant based milk (I used almond milk but you could use soy, oat, rice etc.)

3 tablespoons of vegan butter or margarine 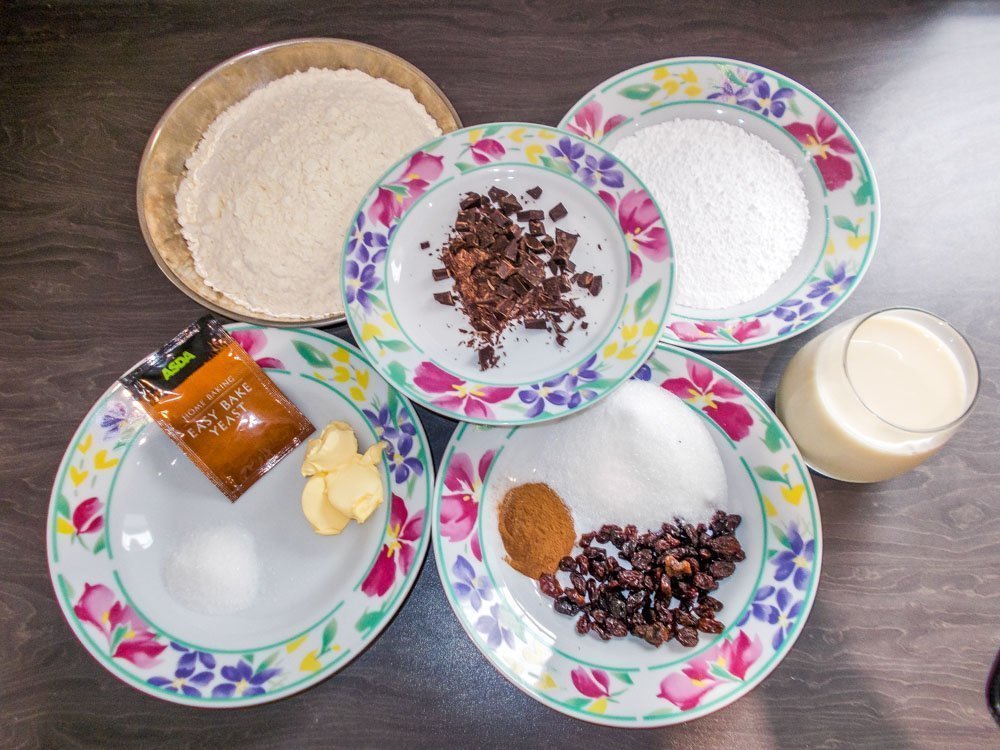 Place 3 tablespoons of the butter into the 250ml of milk in a microwave safe dish and melt together in the microwave. Heat for around 15 second intervals until the butter is just about melted and the mixture is lukewarm to the touch but not so hot you can’t put your finger in it.

Stir in a tablespoon of sugar to the milk and butter mixture. Sprinkle the yeast on top of this, stir and leave for around 7 minutes until it gets frothy.

Pour the yeast mixture into a large mixing bowl and add in the flour a bit at a time, mixing with a wooden spoon. Near the end of the flour you will have to get your hands in! The dough should be quite sticky but you should be able to bundle it into a ball. If you think its too sticky, add some more plain flour.

Place the ball of dough onto a lightly floured surface and kneed for about 3 minutes. Place into an oiled bowl (you can use any lightly flavored veg oil) with a clean tea towel on top and let rise in a warm place in the house for 1 hour.

After the hour is done, place the dough on a lightly floured surface and roll out into a rectangle (mine was approx. 45 x 28 cm). Chop 20g of chocolate into small chunks and in a little bowl, and make the filling mixture by mixing together the remaining sugar, the chocolate chunks, cinnamon and raisins/sultanas. Cover the top of the rectangle evenly with the remaining 3 tablespoons of butter before sprinkling on the filling mixture.

Now we roll! You want to roll the long edge towards the other long edge, keeping it very tight as you go. You should now have a sausage shape in front of you. Cut this into 10 equal slices and place into a baking dish with the swirl facing upwards.

Turn on the oven to 180 degrees Celsius and place the buns in the oven whilst it warms up (this is kind of like the second rise). Once the oven reaches temperature, leave them in for about 20 – 30 minutes or until the tops are nice and golden. Leave to cool in the tray.

Once the buns are cooled, mix together the icing sugar and the remaining plant milk. You may not need all the 3 tablespoons of milk, so just use a bit at a time until you have reached a consistency you like. Then, melt the remaining chocolate in the a microwave safe bowl in 10 second intervals in the microwave, stirring after each. 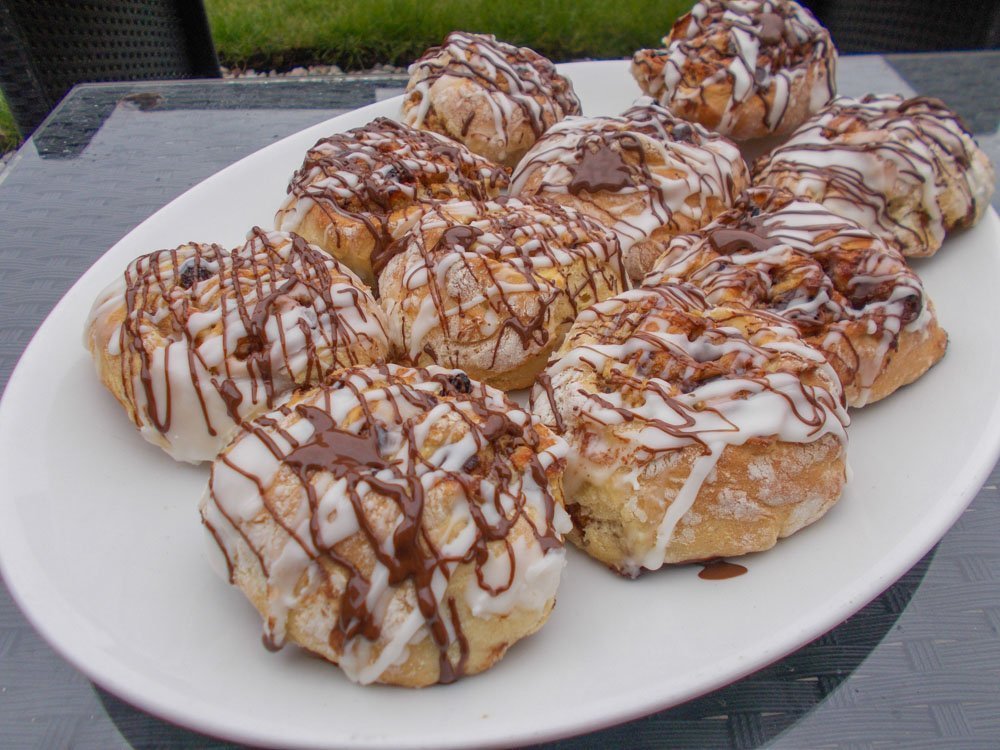 Finally, using a tea spoon drizzle the icing on top of the cinnamon rolls before drizzling the chocolate on top of that. Can be eaten hot or cold – personally, I would microwave for a few seconds to warm up and enjoy with a cup of tea.