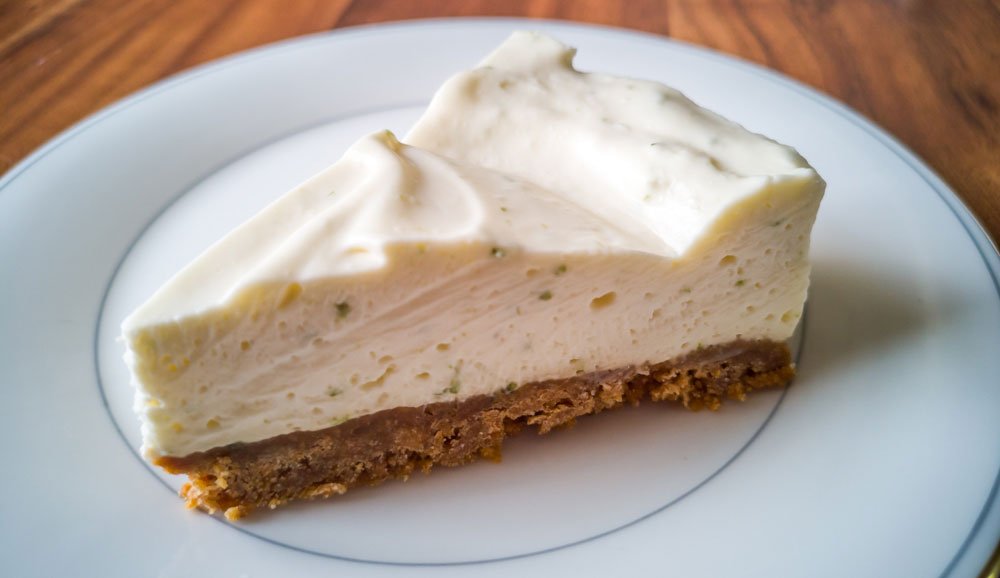 Whilst looking for something a bit different to serve as a dessert I came across Key Lime Pie. Of course I have heard of it like most but as I had never made it before I was keen to have a go.

Another dessert similar to this is Zingy Lemon Cheesecake.

Key Lime Pie is an American dessert and originates from Key West in Florida. It gets its name from the key limes grown in that area.

There are many different versions of the recipe available. Some with meringue, some using Graham Crackers, but it would seem the original pie was first made in the late 1800s and that originally it contained condensed milk.

The pie was created to use condensed milk as there was no ice or refrigeration at the time. William Curry, who was Florida’s first self-made millionaire, had a cook named ‘Aunt Sally’. Aunt Sally is the most credited for the early Key Lime Pie recipe.

A true Key Lime Pie would use key limes as they are more tart and acidic than the average lime. If you are wanting more zing and are just using average lime, then a dash of lemon juice is also suggested, which is what I have done here.

It is said that most families in Florida have a Key Lime Pie recipe and the proper version is pale yellow in colour because of the key limes. It isn’t clear exactly who invented the pie but there are many variations of the recipe to be found.

In 1965, Bernie Papy Jr, a Florida State Representative, called for $100 fine against the advertisement of a Key Lime Pie which hadn’t been made with Key Limes, but the bill failed.

The recipe I am choosing to make has a similar texture to cheesecake and I am making mine using ginger biscuits for the base as the flavours make a nice contrast to the lime.

Key Lime Pie is an American dessert and originates from Key West in Florida. It gets its name from the key limes grown in that area.