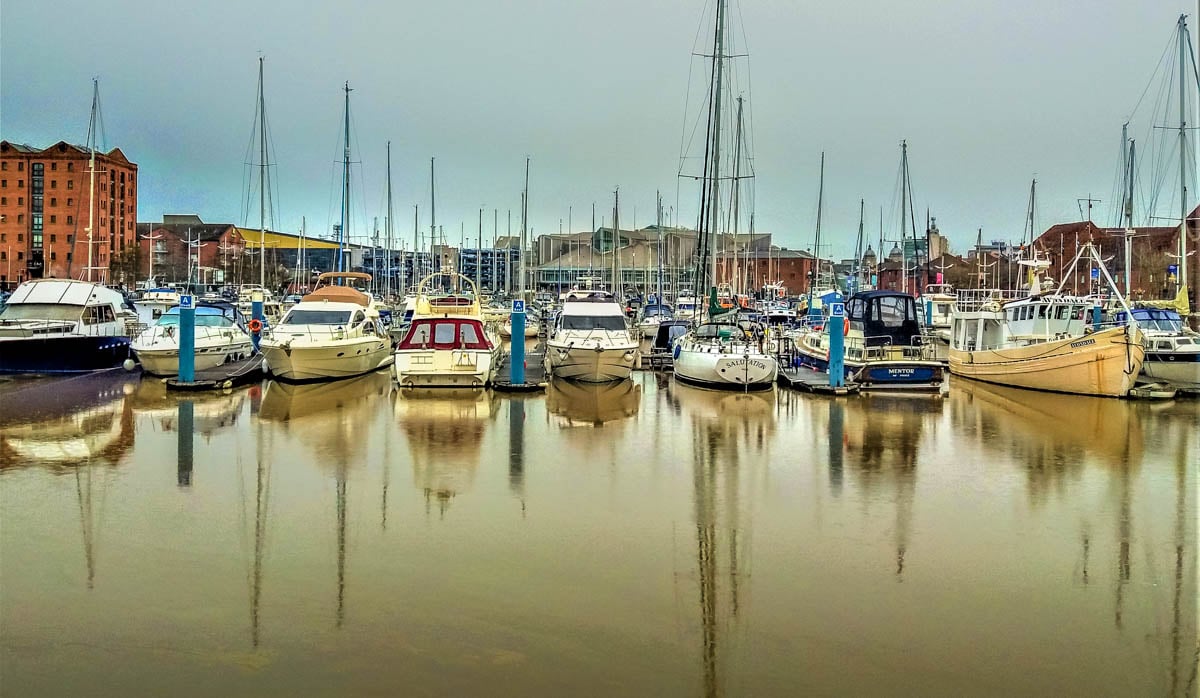 On a rainy weekend and with nothing much planned, my family and I decided to drive up to Kingston-Upon-Hull to take a walk around the marina. We had admired the marina and the Spurn Lightship from the main road many a time before on route to some of the inspiring museums in the museums quarter and we’d always promised ourselves a visit to the marina someday. The main marina is the Humber Dock Marina which was originally known as the Humber Dock, built in 1807 and by 1844 construction began for a railway link to the dock, a branch dock, this officially opened on Friday 18th June 1846 and was called Railway Dock which is now Railway Dock Marina. The docks were closed to shipping in 1968 and in 1983 the Hull docks were opened once more as Hull Marina for pleasure boats. 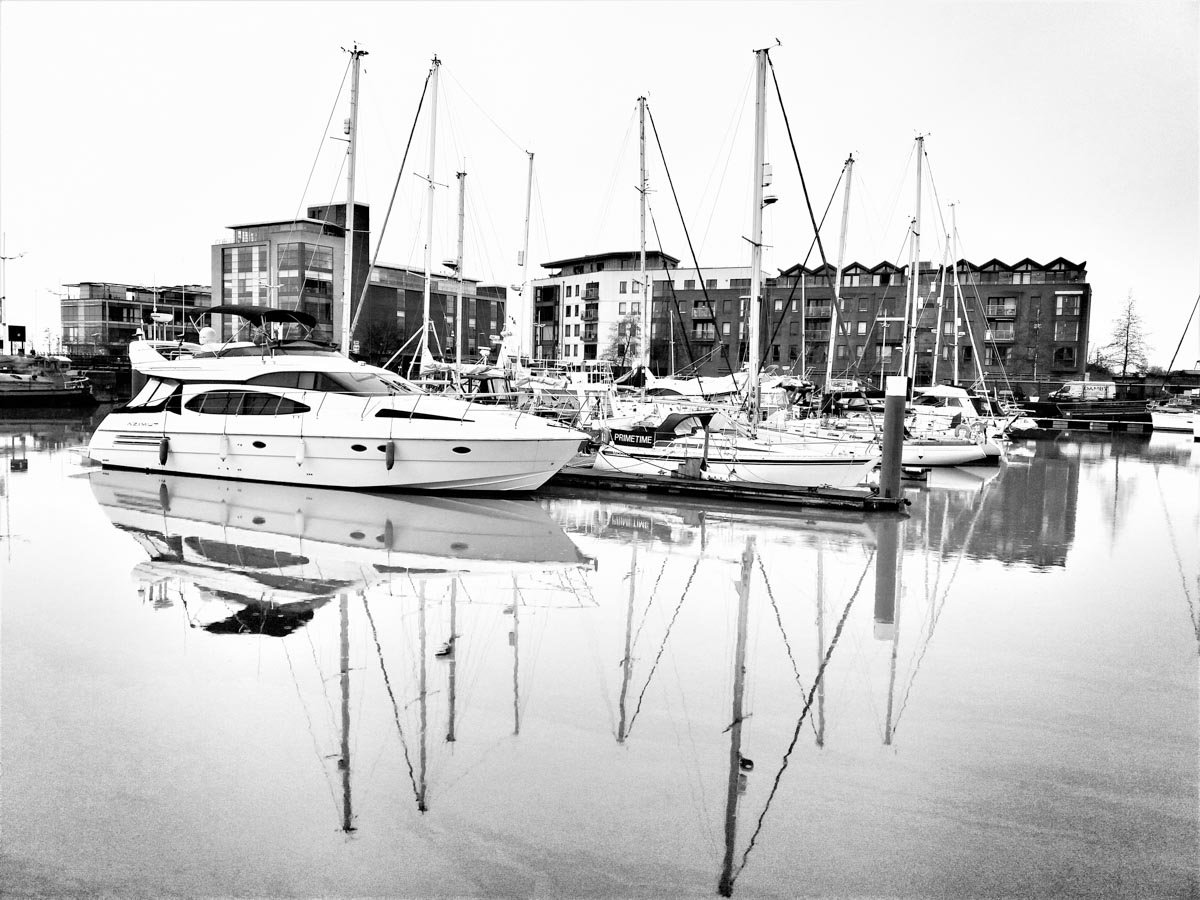 Parking in Hull is easy, the car parks are wide spread and the prices we found are very reasonable and some if you catch a spot are free. We’d parked at Zebedee’s yard on this occasion and set off to explore, but what we hadn’t realized at the time was the number of events taking place at Zebedee’s yard, yes, it’s not only a carpark but also host for Hull’s street food night and a music venue, this year UB40, the Happy Monday’s and Orbital to name a few will be appearing here. As we leave the car park we are struck by the heartwarming memorial to those lost at sea, my photos don’t do it justice and you can’t really get the feel for this multi-dimensional structure, inside the circular metal memorial there’s an ethereal blue light, it has a lighthouse feel about it and the  names of all seafarers are scribed around the structure, captain, deck hand, bosun, apprentice deck hand, etc.… no one forgotten! It appears we managed to stumble upon a new place to explore and return to in the future whilst looking for a parking spot on our trip to the marina. 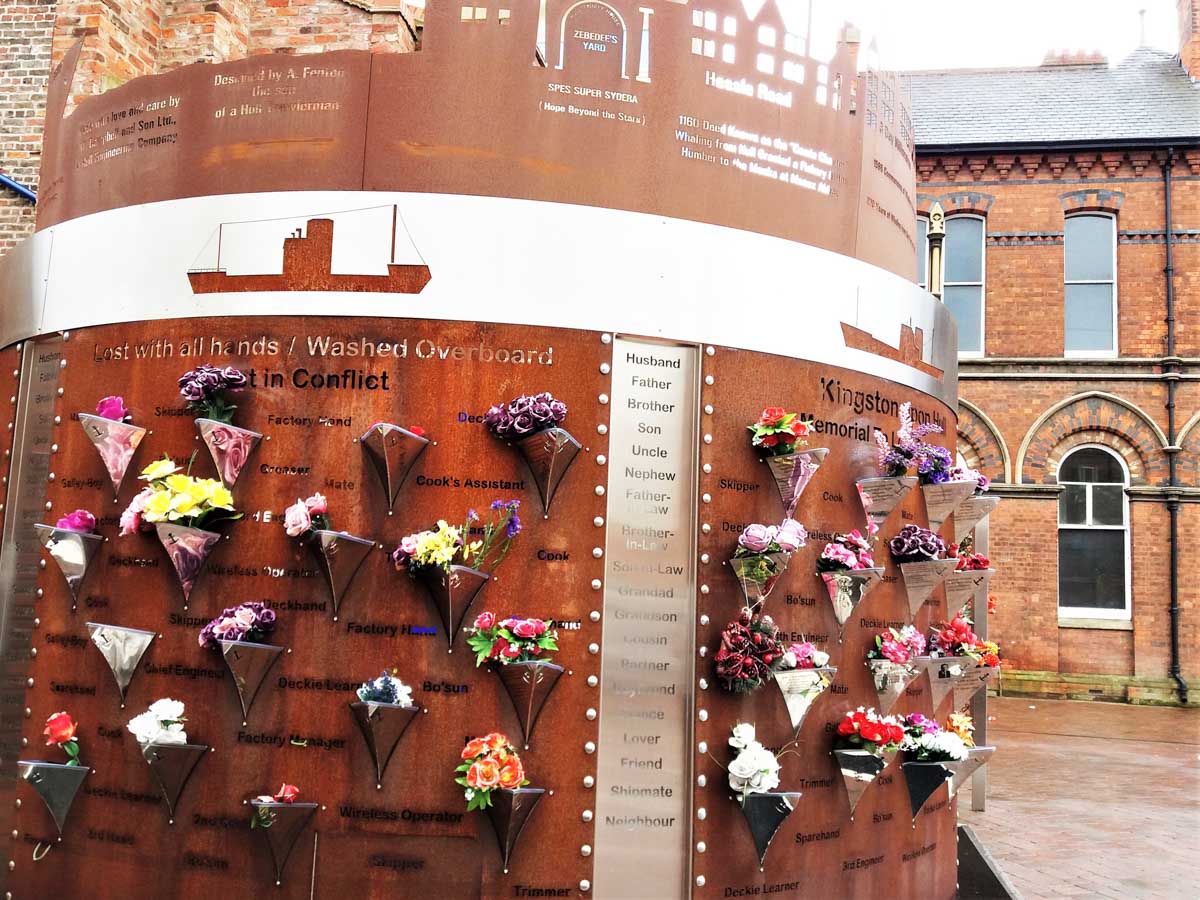 A walk though the old streets of Hull is another adventure, I love the architecture, the cobbled streets and the bustling atmosphere, raining or not it’s always fun and I always notice something I’d not spotted before, somewhere to visit, somewhere to eat or a photograph waiting to be taken, so there I am stopping randomly to take photos while the family usher me on once more. Come on I hear them cry, not again, get out of that road, where’s she going now! They really don’t mind me taking photos, but I do stop quite randomly when I notice something that takes my fancy, reflections, old signage or little details and Hull is full of fascinating detail. 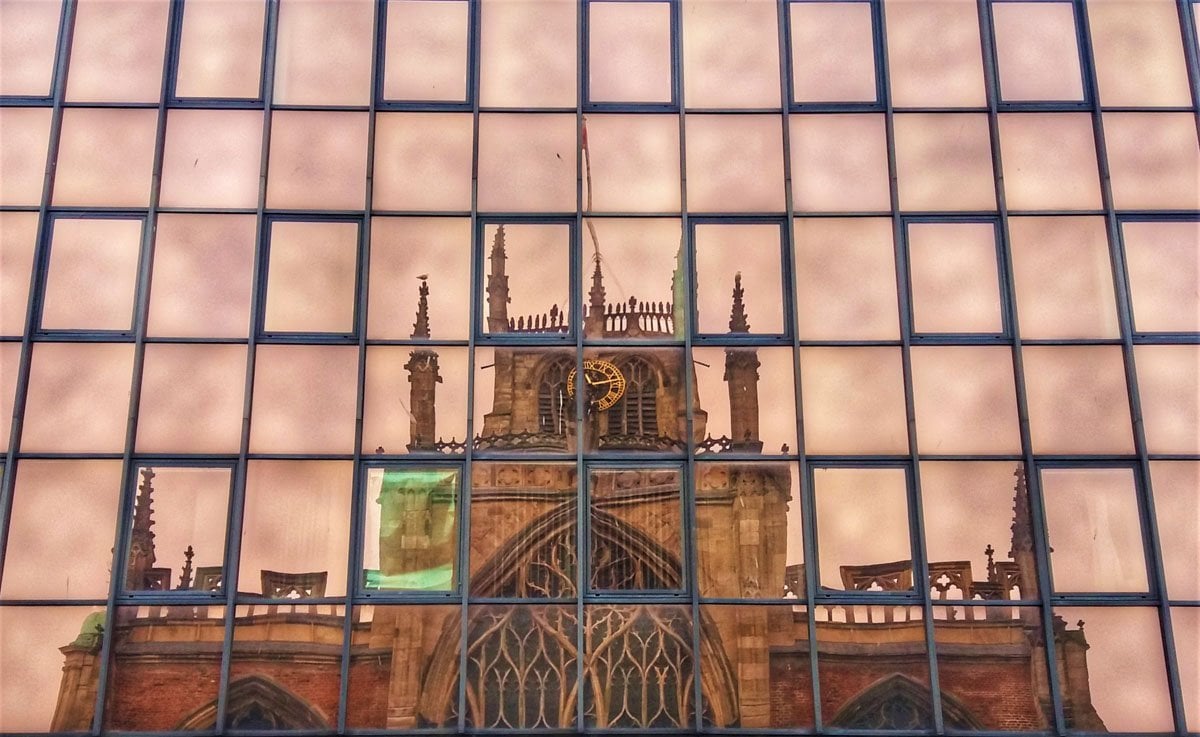 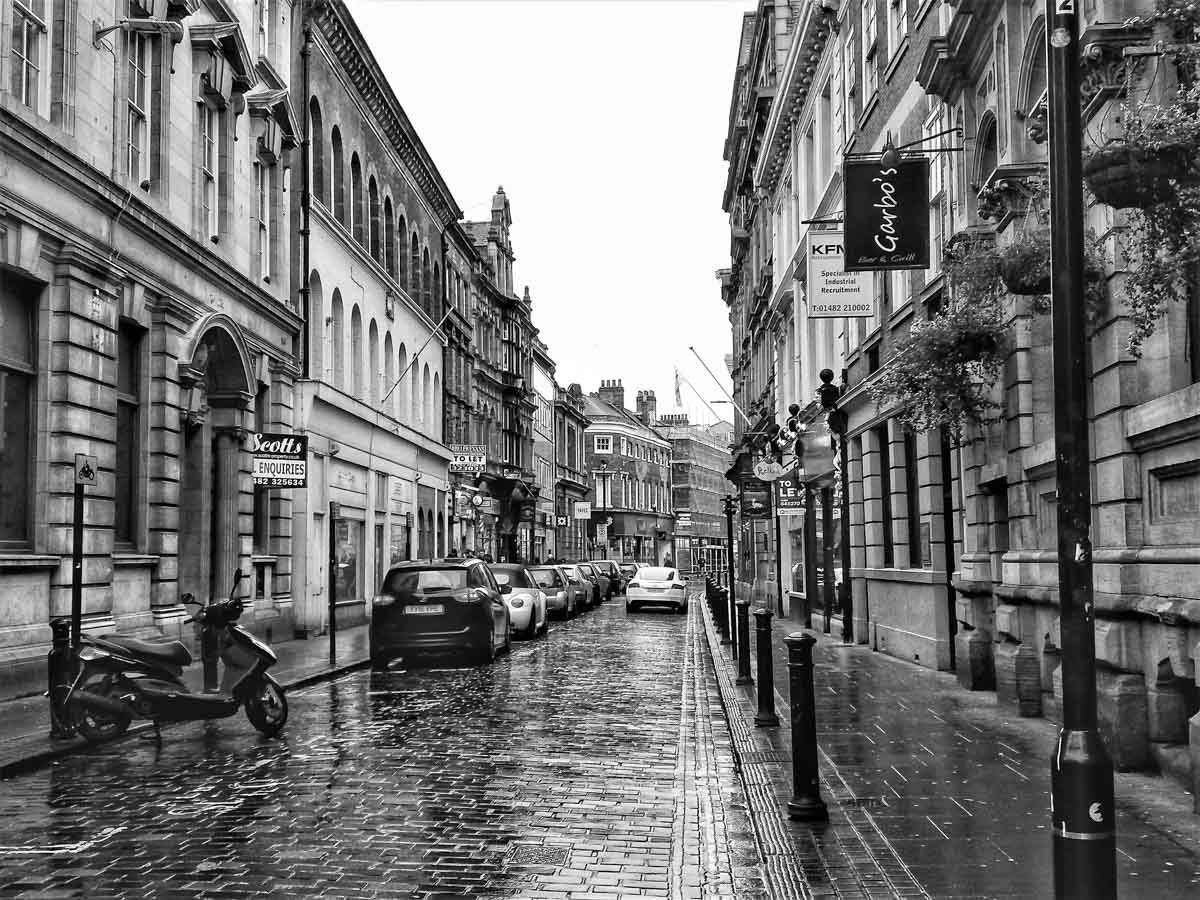 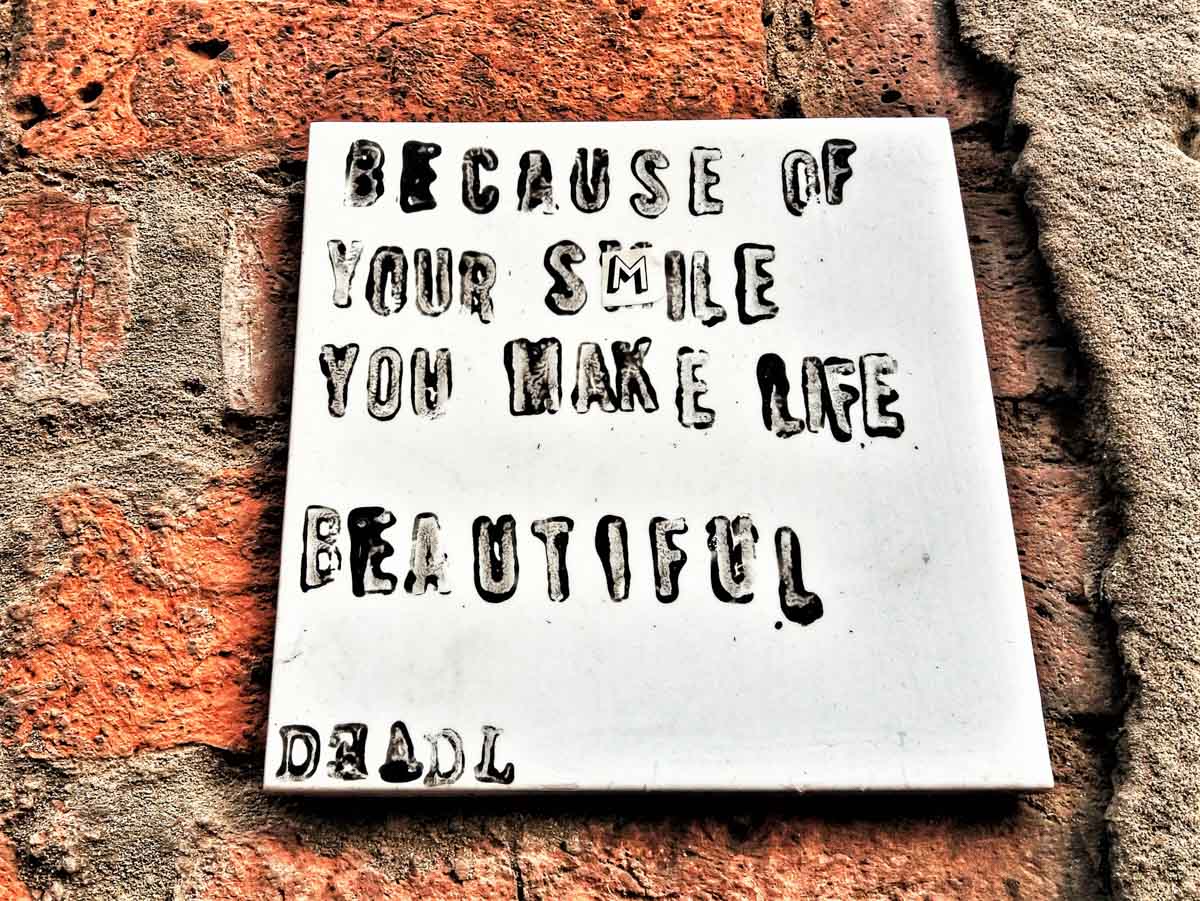 We arrived at Victoria Pier and looked out across the estuary on a dark skied rainy day, the tide was quickly receding, the brown silt all stirred up and swirling in the current, with gulls feeding in the exposed muddy silt. 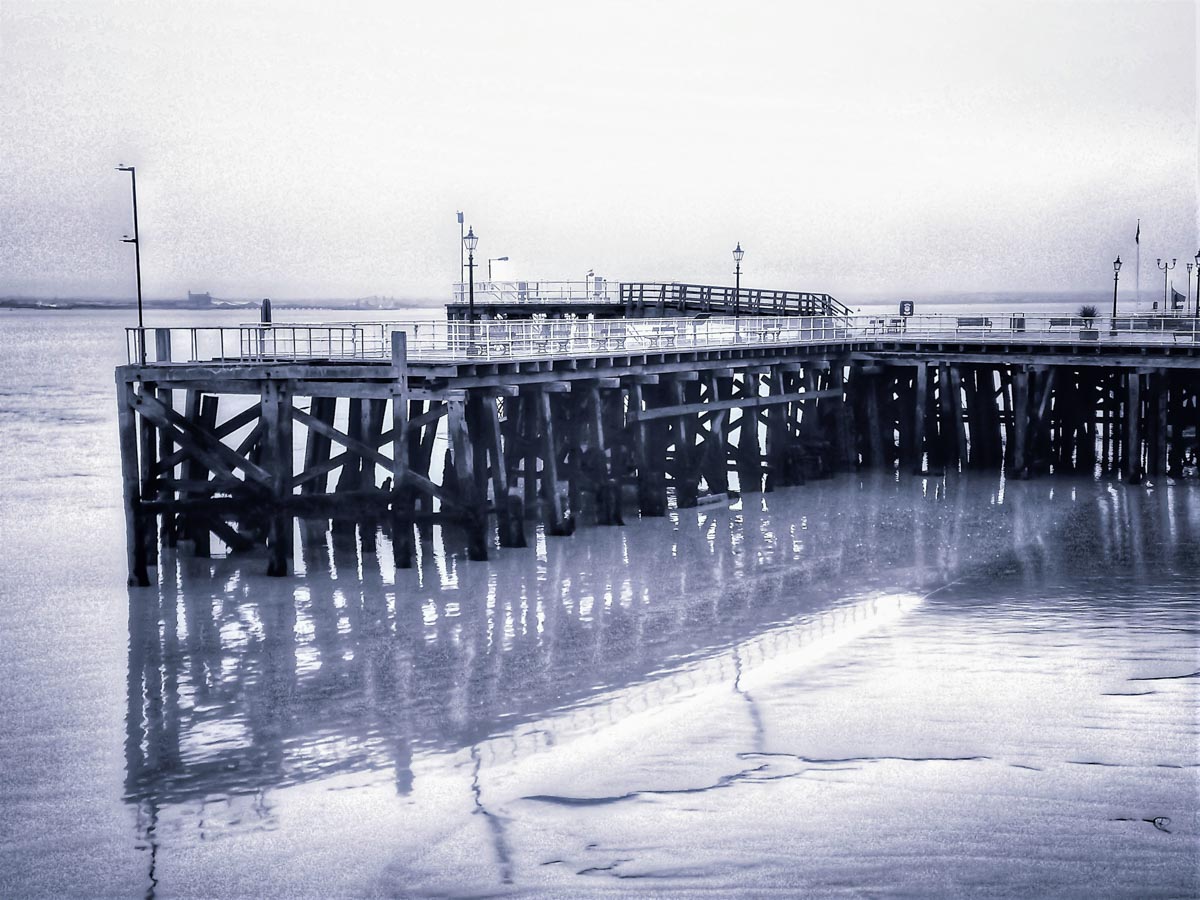 Behind this view a sculpture that took my imagination, a figure of a person standing on a high plinth, greenish-blue brass in colour and looking out to sea in the direction thousands of Hull’s trawlermen would have travelled as they set out toward the Icelandic waters to fish. 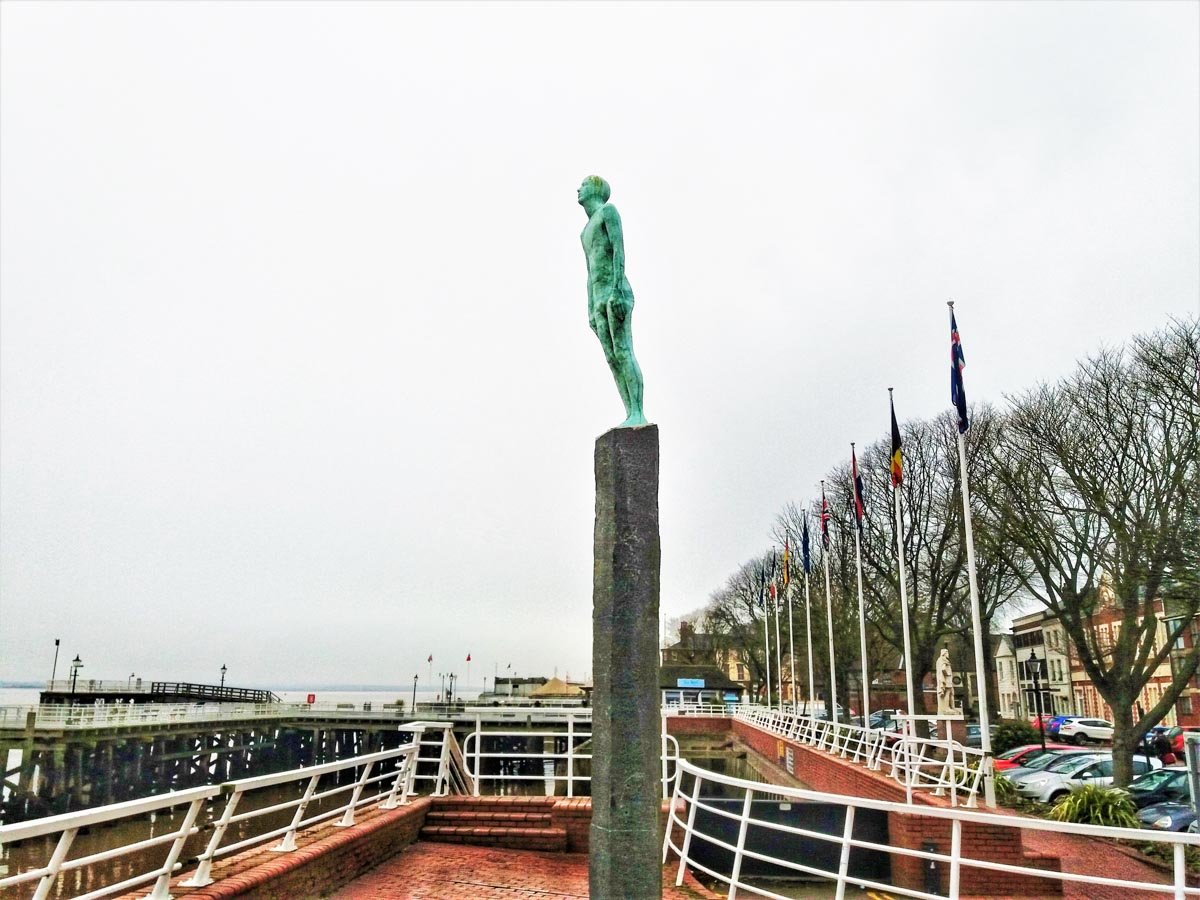 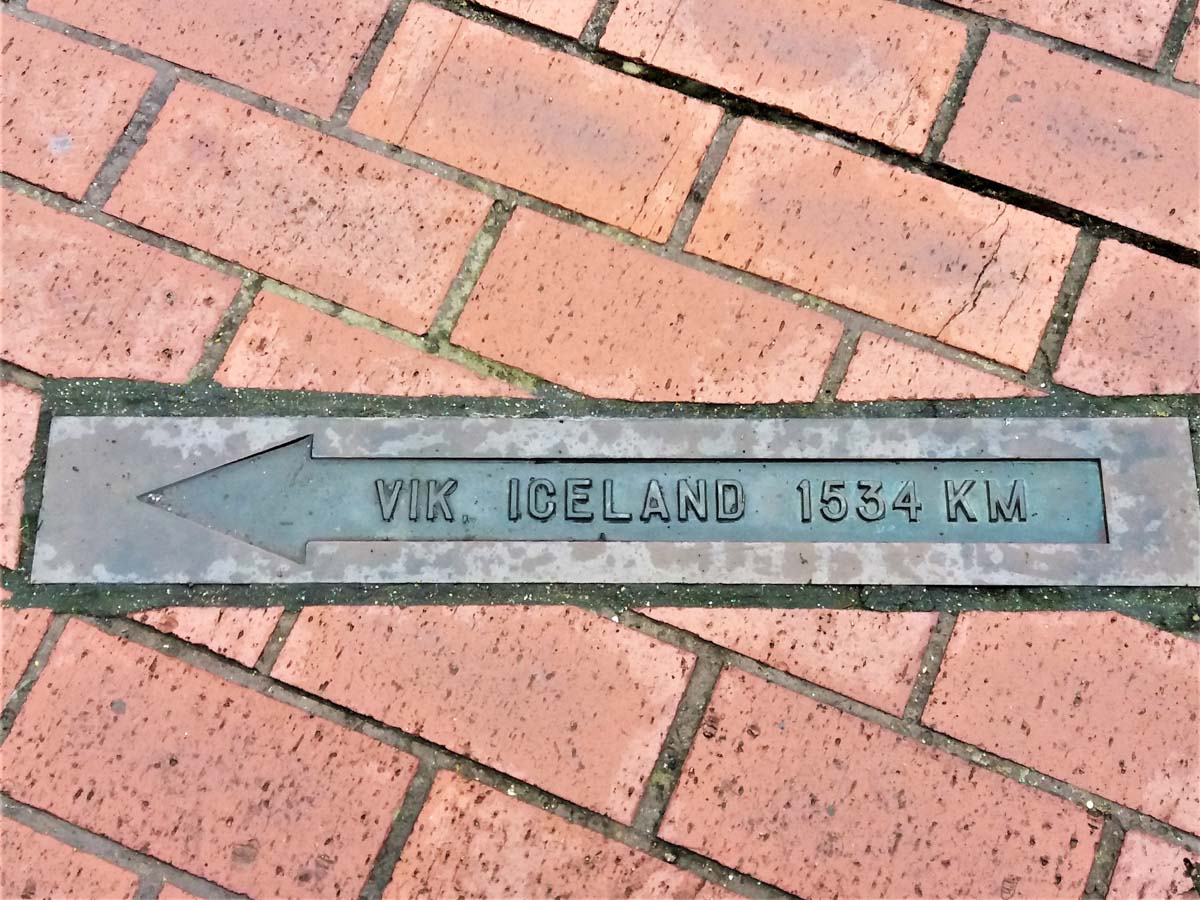 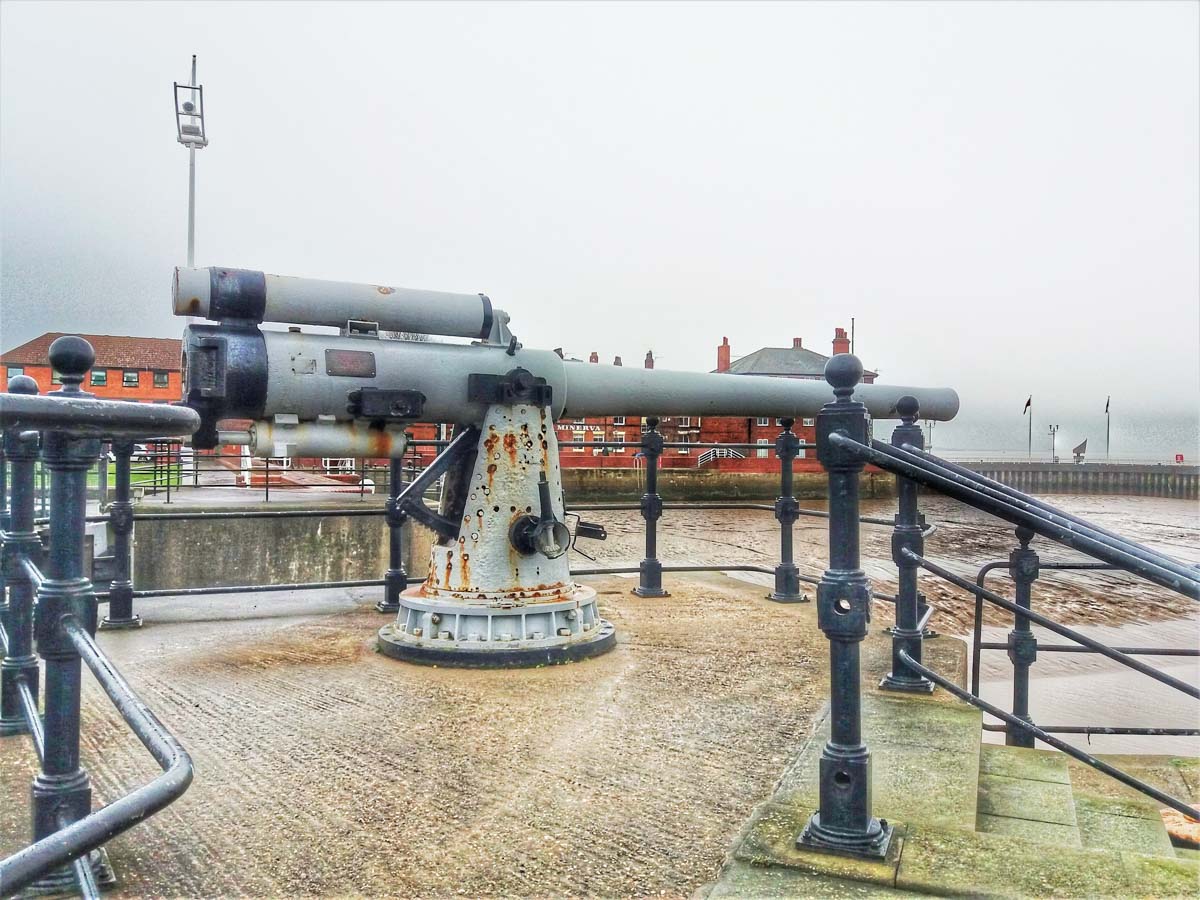 Hull Marina was in sight now, though the mouthwatering aromas of food that emitted from pubs and restaurants in the area were very distracting on an empty stomach! As we rounded the corner we realized there was much to see and such a variety of old versus new as is what we have become to expect of Hull after a few day trips. First, we see the Humber Dock Basin looking sullen and bare as the tide had receded, empty and silty waiting for the salty brine to return and fill it. To the side of the basin is a 4” anti-submarine gun recovered by members of the Hull branch B.S.A.C on the 12th August 1984 from the wreck of the SS Greltoria sunk in action on the 27th September 1917. Around the dock area there a few sculptures not to be missed so be sure to have a good mosey around. 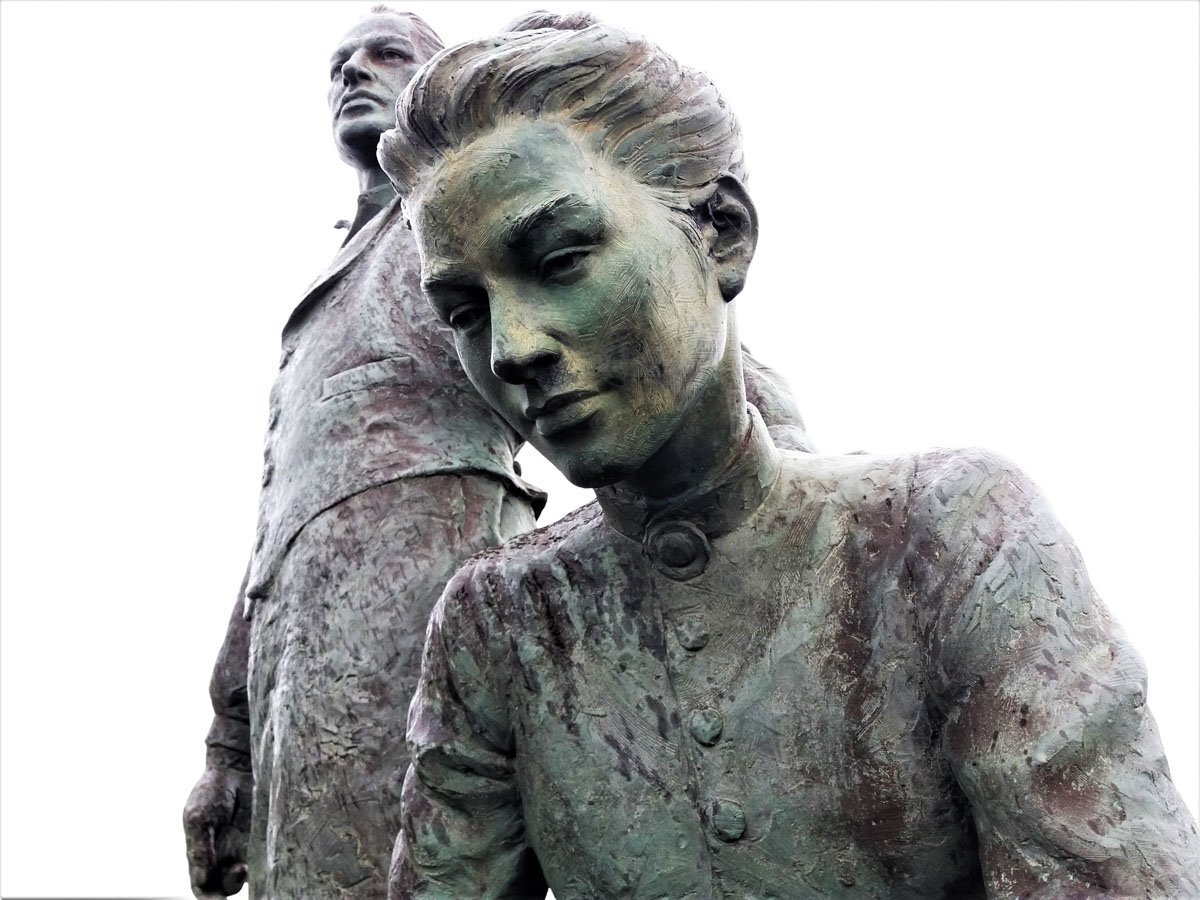 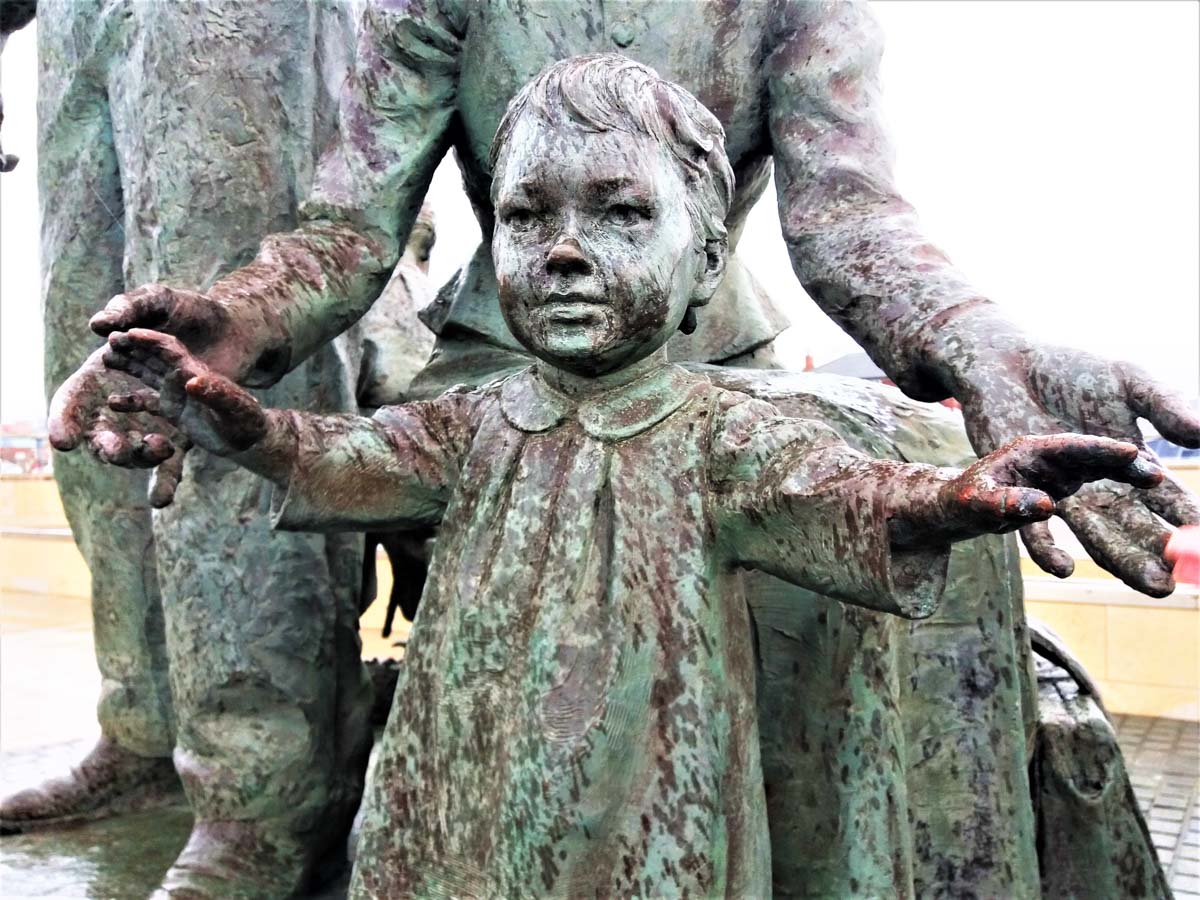 The Humber Dock Marina is a mix of stunning new pleasure boats and examples of maritime history such as the Spurn Lightship. What I hadn’t expected to see was the 72-foot challenge round the world racing Yacht, Catzero.  The yacht, formally known as One Hull, is insurance category one which is, I feel a clever name for the yacht. Catzero can sail anywhere in the world in any conditions, was purchased with capital funds from NHS Hull and its primary use is with groups of young people as a confidence building tool, to enhance team building and promote a sense of adventure, a very worthy cause. Catzero is also available to hire to corporate or private clients. Now what an opportunity! 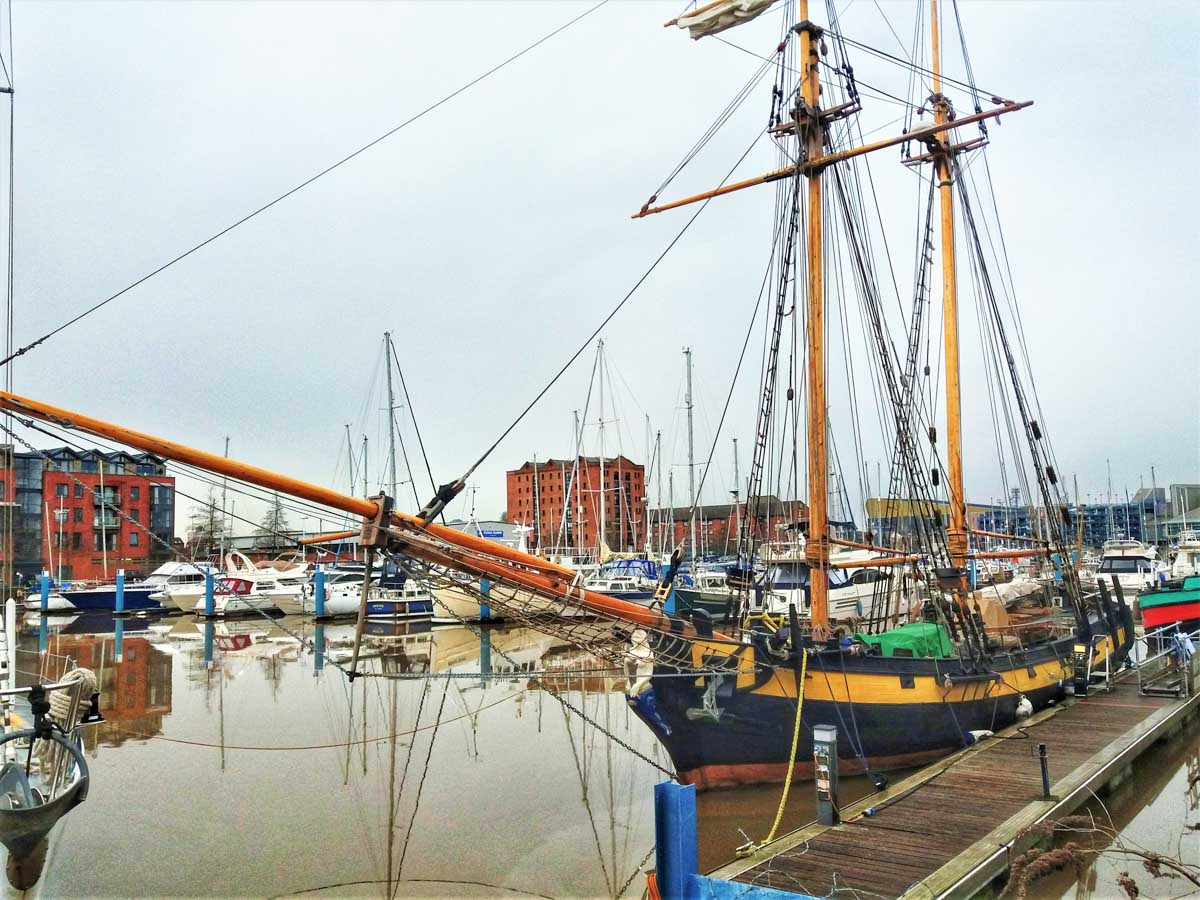 So much to see at the marina so little time and still some rumbling tummies! Next stop was to take a visual look at the Spurn Lightship at the opposite end of the marina, the Castle Street entrance. Well what a stunning ship, and to imagine it in use along the river Humber, it’s said to be one of the hardest rivers to navigate in the world. The Spurn Lightship was part of a system of lightships, floats and lighthouses to mark a safe route along the river and was used for nearly 50 years. To work on the lightship was not for the faint hearted, there were 7 crew members who each worked a schedule of 4 hours on duty and 8 hours off duty, they would make repairs to the ship, record the names of passing ships and record the weather conditions while on duty. Work included a month onboard the lightship, then a month on the buoy yacht and on shore. Holidays? One week was allowed. The work was dangerous, especially considering that the ship had no engine and could not maneuver out of the way of any wayward ships.  I feel a need to return in the summer, so we can step aboard the Spurn Lighthouse and discover more about life on board. The lighthouse is open to the public from June through to September. The modern day marina is a fantastic feature to visit and is the perfect place to begin an adventure on the waterways too with easy access to the Yorkshire coast or if you prefer inland waters the River Ouse, or river Trent. 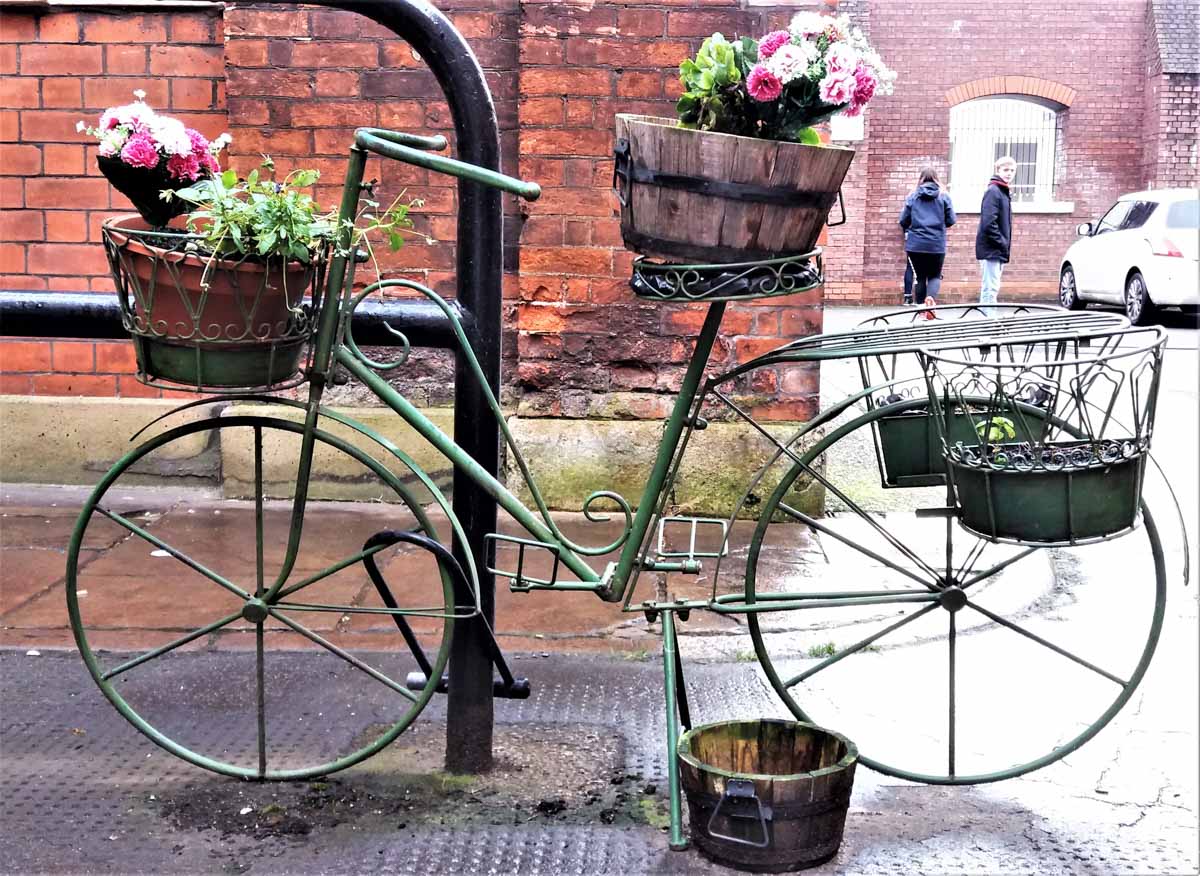 Hull, again gave us a lovely day out, we all thoroughly enjoyed our visit to the Humber Dock Marina and the walk through the cobbled streets and alleyways, we did eventually find time to eat, though the choice and variety of eateries in Hull is just mind boggling. 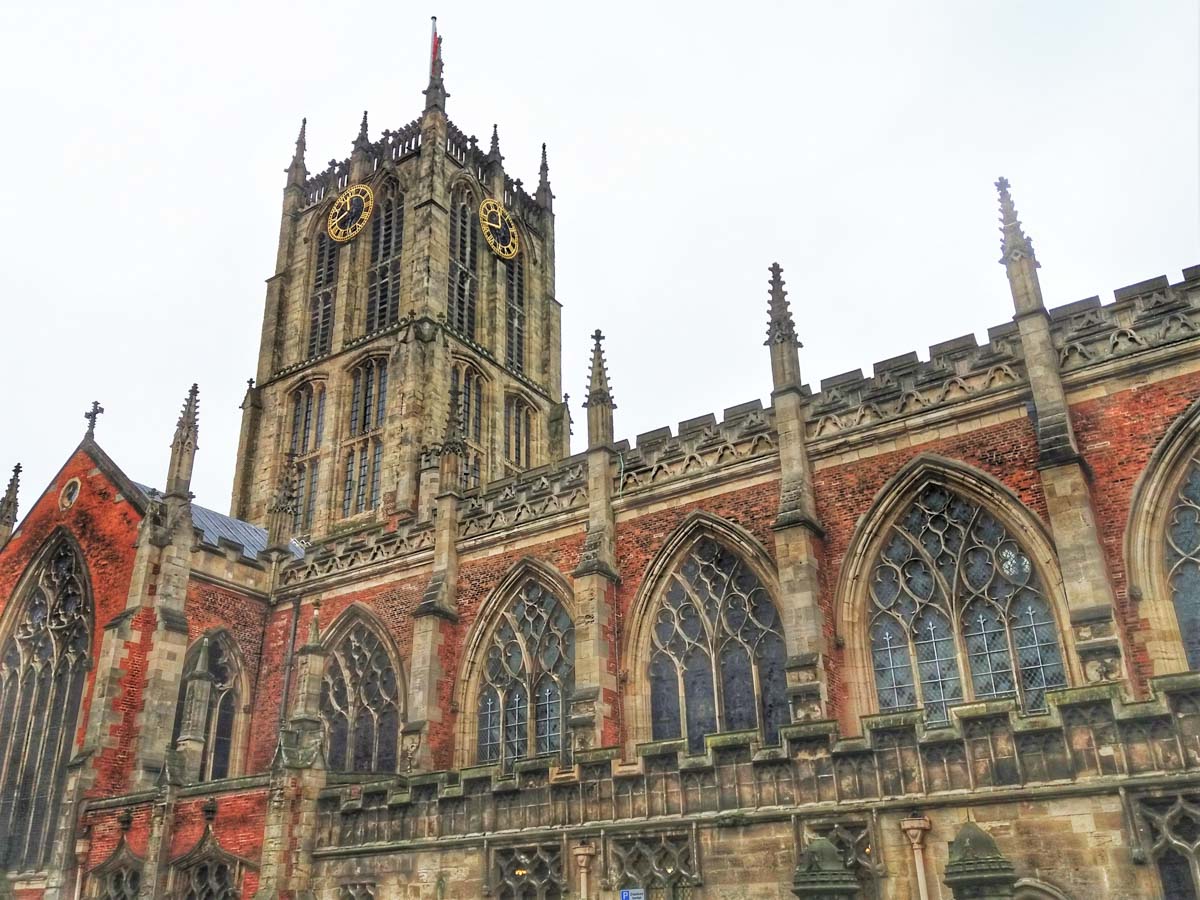 A return visit is certainly guaranteed, we still have a few favourite Hull destinations which will be returned to such as Hull’s Streetlife Museum in the Museums Quarter and now we have a few more areas to explore and tick off our Hull bucket list. Until next time, I hope I’ve inspired you too.