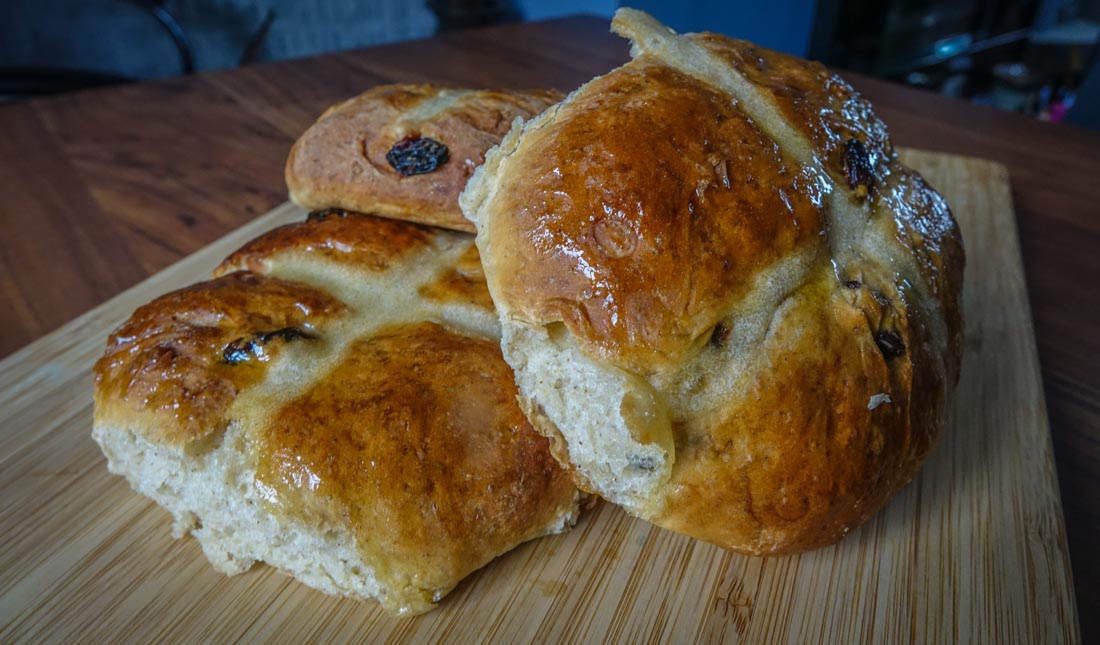 These delightful spicy fruit laden hot cross buns have long been an Easter tradition along with the chocolate egg. In England, hot cross buns are marked with a cross. The cross is connected with religious offerings of bread. Traditionally they are eaten during Lent, in the week leading up to Easter. They mark the end of Lent, the cross representing the crucification of Jesus.

In 1592 Queen Elizabeth I decreed hot cross buns were too special to be eaten any day and could only be sold on Good Friday, Christmas or for burials.

The buns were also believed to have certain medicinal or magical properties, from protecting homes from fires or sailors from shipwreck, and according to superstition, if you bake them on Good Friday they will never go mouldy.

This particular recipe cuts down on ingredients making them quick and easy to make but not losing their great flavour. My son made these and I was so impressed with them I had to have a go share the recipe.

Sift the flour, spices and sugar into a large bowl. Add the dried fruit and stir it all together until well mixed.

In a separate jug, measure out the milk and tepid water. Melt the butter and add to the milk/water mix, and add the egg. Blend this all together using a fork. Pour this into the flour mix and stir until all the ingredients have combined.

Bring the dough out and place on a lightly floured surface. Knead the dough for 5 minutes to ensure it is well mixed.

Place the dough into a lightly oiled bowl and cover with clingfilm. Leave this for an hour until doubled in size or until when a finger is pressed into it, it leaves a dent.

When the dough is ready, break into 9 individual portions and roll each portion into a ball. Arrange the dough balls on a baking tray lined with baking paper. Cover with a damp tea towel and leave to prove for another hour.

Now for the crosses! Mix the plain flour with approximately 5 tbsp water to make a thick paste. Spoon this into a piping bag which has a small nozzle. Pipe a line across each of your buns then do this in the opposite direction to form a cross on each.

Bake for 20 minutes or until your buns are golden brown in colour.

To prepare the glaze, melt your apricot jam until runny. Using a brush, paint over each bun and leave to cool.