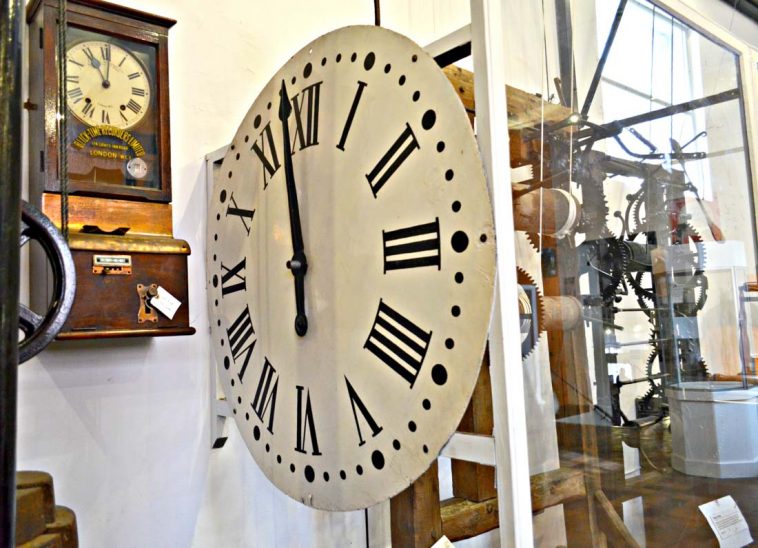 Nottingham Industrial Museum takes me back to my childhood, it brings back all the lovely memories of visiting with my mum and brother, we’d always had an interest in all things mechanical, trains, steam engines, motorbikes etc. The local industries on display at the museum range from Lace making and textiles, pharmaceuticals, telecommunications, clock making, iron works, printing, railways, motorcycles, bicycles and so much more. Working examples of steam engines full sized and models plus the Basford Beam engine can be seen steaming on the last Sunday of the month. Nottingham industrial museum is run entirely by volunteers and is open on weekends and bank holidays. 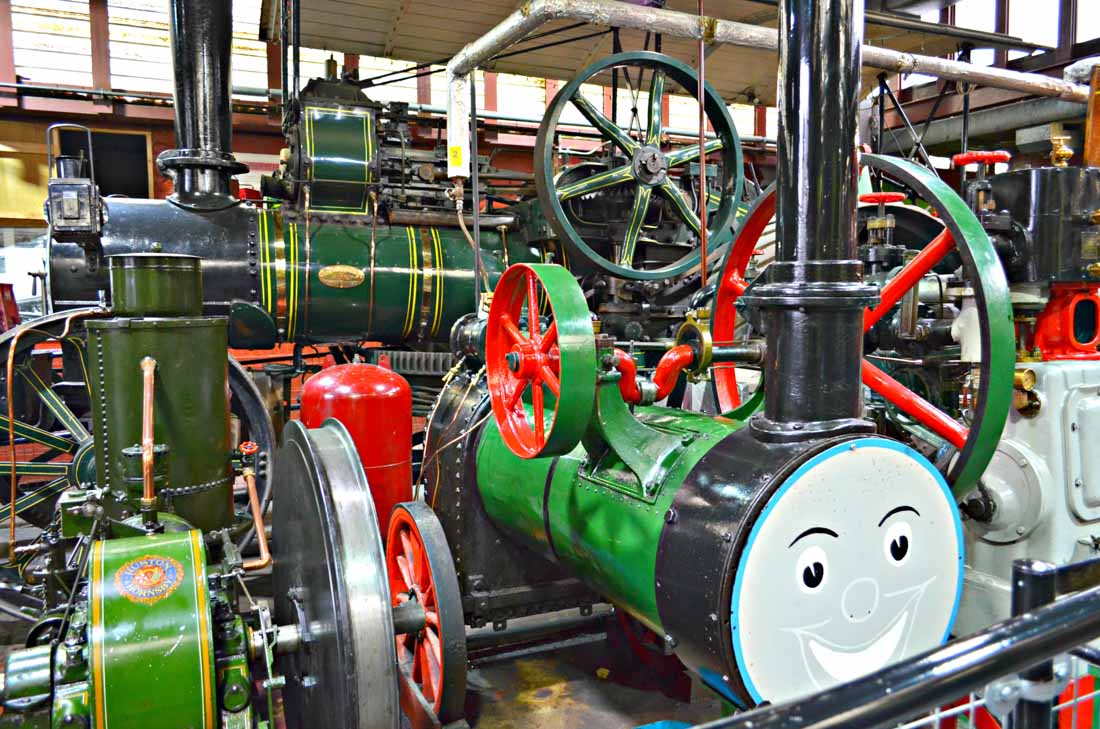 Years on from my childhood favourite exhibitions, the steam engines and such, I now find the examples of local industries at Nottingham industrial museum just as interesting as I realize the links within my own family history. My dad, Jerry, worked in the telecommunications industry locally. My mum Joy, worked at the local Boots factory site for some time as did I when I left school, I worked full time at Boots head office until I trained as a sewing machinist making lingerie. My uncle Jimmy was a clock and watch maker in Nottingham. 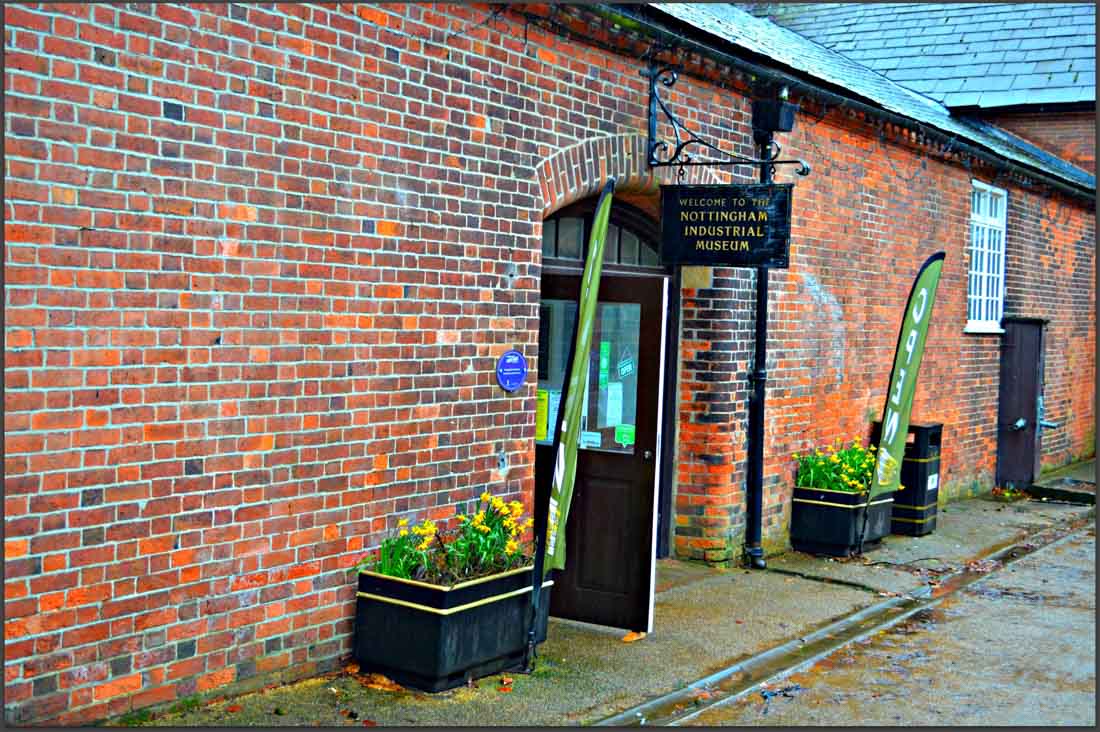 As you enter through the main entrance of Nottingham industrial Museum and walk to your right you will enter into the transport display, the first and very commanding display is of a 17th century carriage which was once owned by the Baskerville family of South West England. The carriage is probably my favourite piece of the transport display due to its grandeur and pure size, so dominating as you step inside and conjuring the imagination. 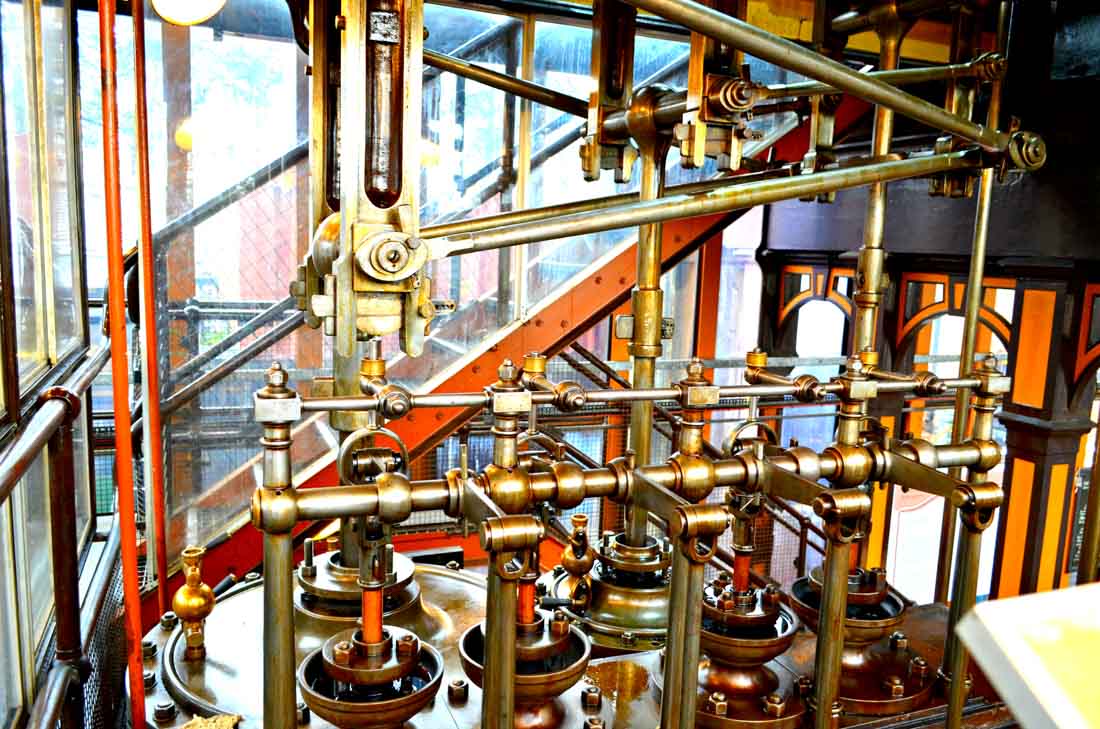 The Steam gallery and the giant beam engine are an absolute delight to visit, the Basford beam engine is very impressive even when it’s not in steam, but to see in full working conditions as I said before, visit on the last Sunday of the month, you will absolutely not be disappointed. The Basford Beam engine was one of a pair built in 1858 in Newcastle Upon Tyne and was installed at Basford pumping station to lift water 110ft from the sandstone below to supply the City of Nottingham with fresh water. The engine was replaced in 1965 and removed to the purpose-built gallery where it can now be viewed in steam once a month.

In the gallery, there is a working telephone exchange where you can make and receive calls to one another and watch the exchange components whir to connect you. I love the old retro telephones there that remind me of the ones we once used, the rotary dials! Remember those? 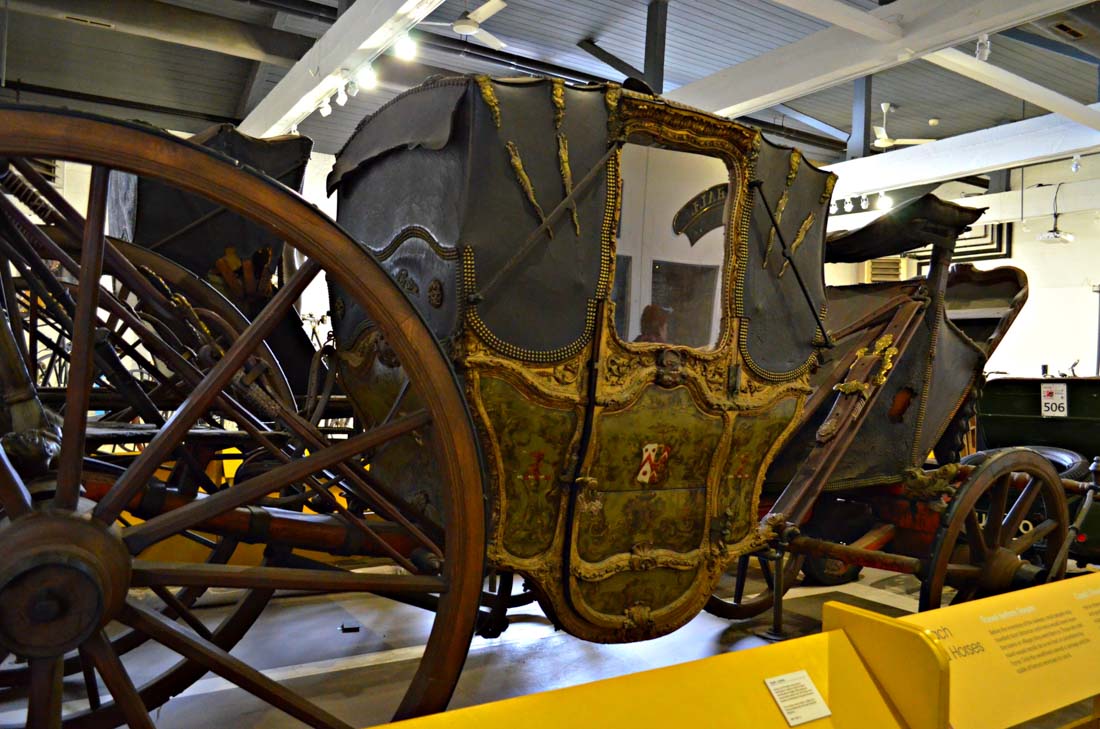 As well as the giants in the gallery I also love the miniatures, the steam models on display, now running with the use of compressed air due to health and safety, but still such fun to watch them whirring and humming into action. My brother Jeremy used to have a model steam engine, we had so much fun with it as kids, I guess it’s probably in my shed all these years later. 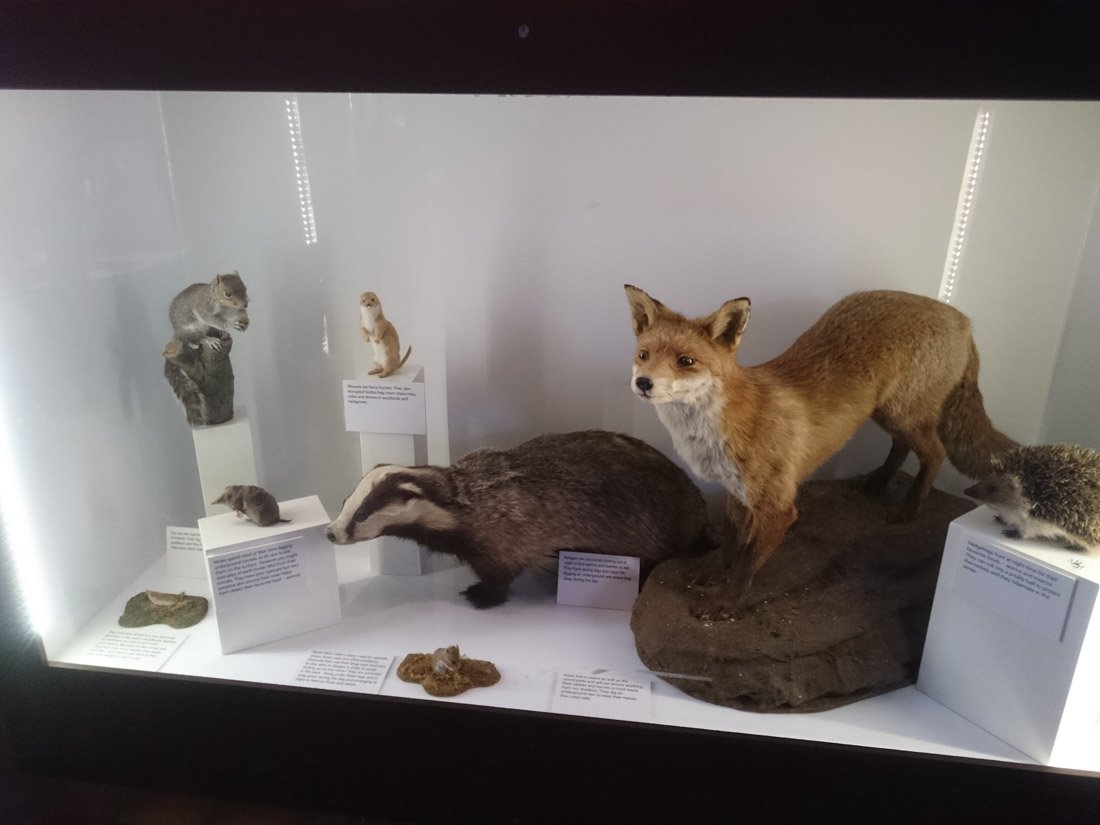 If you visit Wollaton Hall, the deer park and gardens, it really isn’t a complete trip unless you come into the courtyard and pay a visit to Nottingham industrial museum, there’s so much to take in for all the family, we enjoyed using the Morse code transmitter on our visit, what an eye opener, this is a fully working replica of the Morse code transmitter used on the Titanic in 1912 to transmit the distress signal.

This is one of the messages sent. ‘CQD CQD SOS de MGY. Position 41.44N 50.24W. Require immediate assistance. Come at once. We have struck an iceberg. Sinking. We are putting the women off on boats.’ 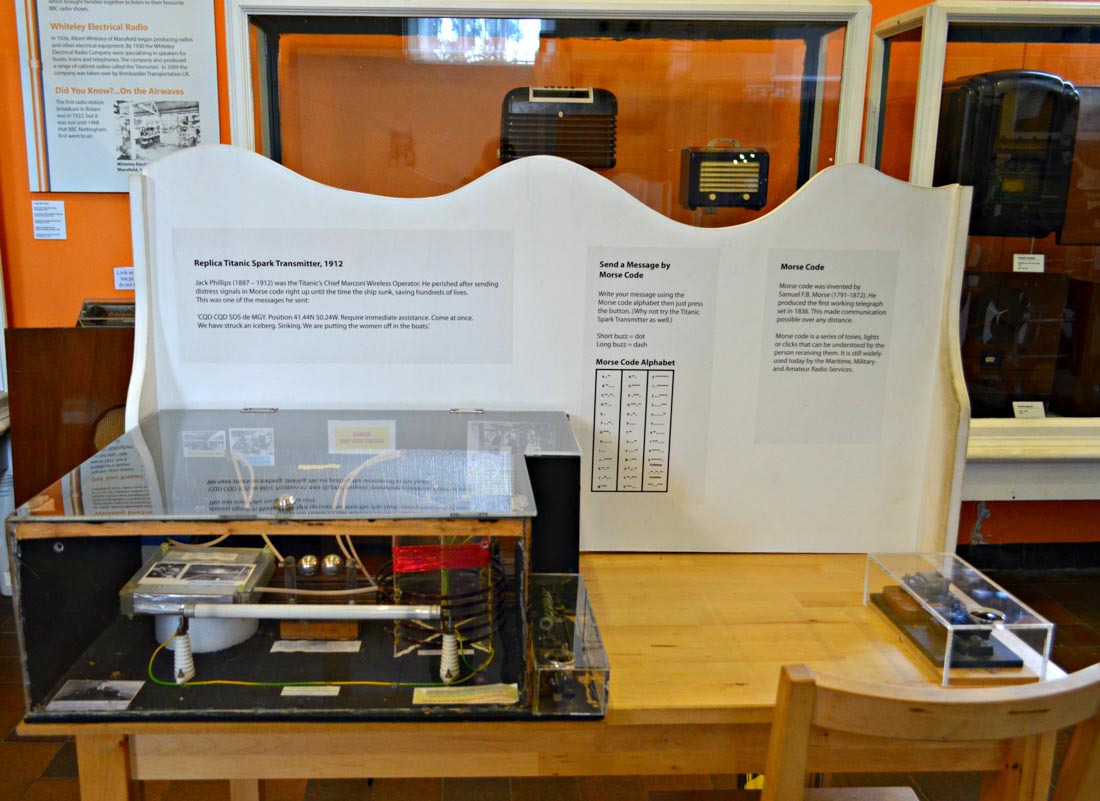 Can you try transmitting this message using Morse code?

My family and I thoroughly enjoyed our visit to Nottingham industrial museum and of course built more lovely memories, we also stopped off for a coffee at the Café in the Courtyard, a delightful, yummy latte. The rest of the family had a game of table tennis in the courtyard whilst I went into the Potting Shed and bought a gorgeous little plaque that I had eyed up on my previous visit, it says” The best things in life are wild and free.” Which I agree with completely. 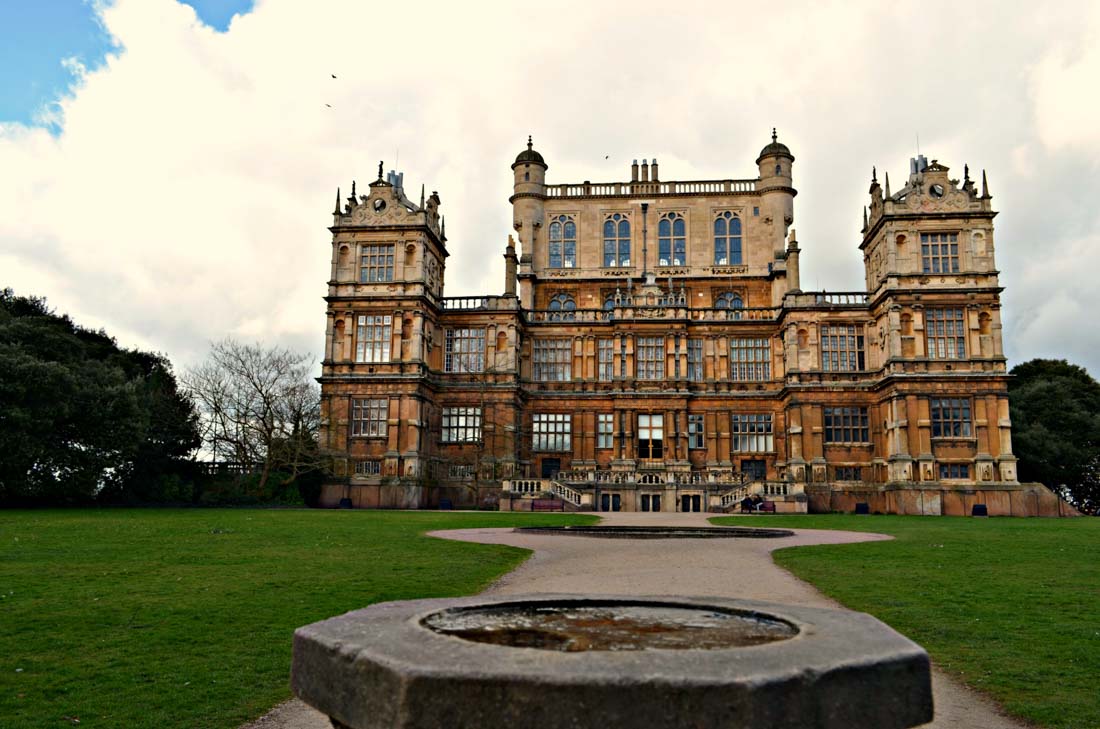 Speaking of family history links, continuing from earlier, my aunt Phyllis spent some time at Wollaton Park in world war 2 when the park was utilized in the war effort after she had signed up as a young auxiliary. In 1940 Wollaton Hall opened its doors to well over 1000 soldiers rescued from the Dunkirk beaches, exhausted and in need of respite. Later in March 1944 over 2000 American soldiers arrived at Wollaton park, they lived in a kind of tent city within the grounds, the 82nd Airborne 508 Parachute Infantry Regiment made this their base. 2,056 Gi’s left for Normandy and 1,061 were casualties including 307 killed in action. Wollaton park was used in the later war years as a POW Camp for 4000 or more German and Polish prisoners of war, which is how my aunt Phyllis met her husband, known as ‘Jimmy.’ As you can see Wollaton park has had its many rolls to play in history, my own included.

The 17th century courtyard and former stables has a lot to offer including not only another gift shop and visitor centre that sells beautiful gifts, ice-creams and stunning prints of the local wildlife but also the yard gallery which can be hired for exhibitions. The local wildlife exhibition is fascinating and can be accessed through the shop, a lovely little area giving examples of wildlife and educational fact finding.  Also in this area is the memorial to the 508th  Parachute Infantry Regiment with a full roll of honor.

We had popped into the gift shop to buy ice-cream and some duck food. I usually bring some mixed corn or similar for feeding the ducks because bread is quite harmful to ducks and should never be fed to them. I’d forgotten to bring some of my hen’s corn feed along with me but was so glad the shop supplied little pots of duck feed for just £1. 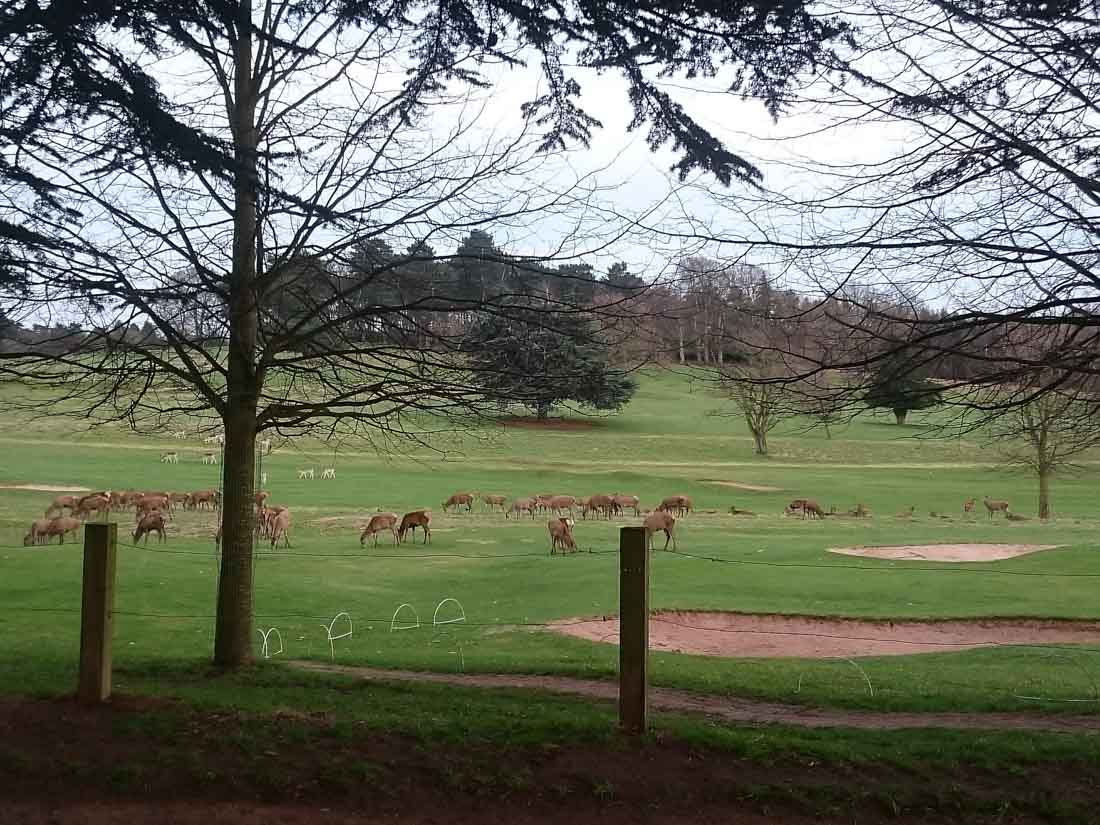 The botanic garden is a small walled garden which is also part of the courtyard and is developed and run by volunteers from the Nottingham branch of the Hardy Plant Society since the early 80’s and funded by plant sales. The main gardens adjacent to Wollaton hall are formal gardens that boasts a beautiful camellia house that has recently been renovated, the steel house is the oldest in Europe and contains some impressive 50-year-old camellias.

When visiting Wollaton hall, deer park and gardens, let me remind you how much more there is to see and experience, one day is hardly enough to take it all in, that’s why I come back time and time again. The Hall is now Nottingham Natural History Museum, the courtyard houses the inspiring Nottingham Industrial Museum, not forgetting the gift shop and visitor centre, the Café in the court yard provides some yummy refreshments, then there’s the Potting Shed for gardening and lovely unique gifts. Please do make time for a meander through the gardens and a wander, or a jog around the beautiful lake or go deer spotting in the park. Young Kids may want an hour at the play park too just for good measure, so I’d be ready for a full day out and make some amazing memories!