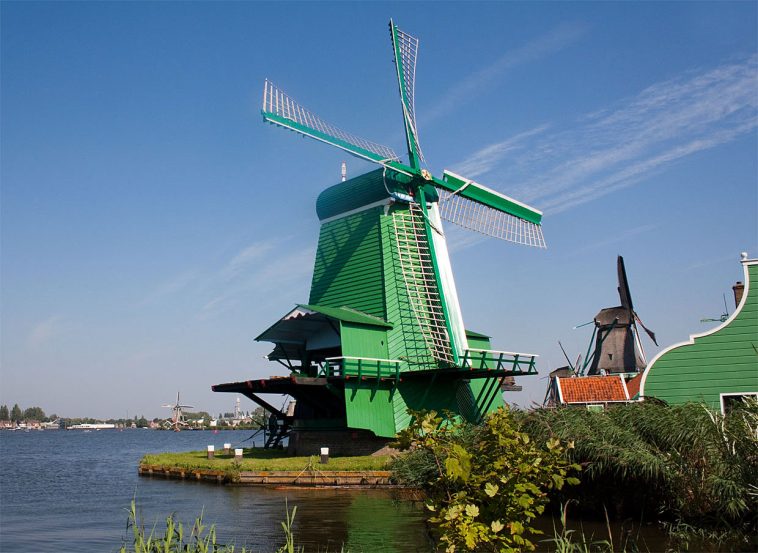 The Netherlands and windmills are inseparable. They are one of the most famous Dutch icons. With still over a 1000 windmills spread across the country, chances are that you will see one when visiting the Netherlands. The Zaanse Schans is one place where you can see and visit some unique well preserved working windmills.

Around 250 years ago, well over 600 active windmills were cramped into this relatively small area. Together they formed the first industrial site in the world.  The heydays of the Zaan region all started with the invention of the crankshaft by Cornelis Corneliszoon van Uitgeest in 1594 which turned out to be a very important discovery. The crankshaft made it possible to convert the horizontal wind direction on the windmill sails into a vertical sawing movement. Suddenly, the windmills were able to saw more wood than had ever been possible by hand. 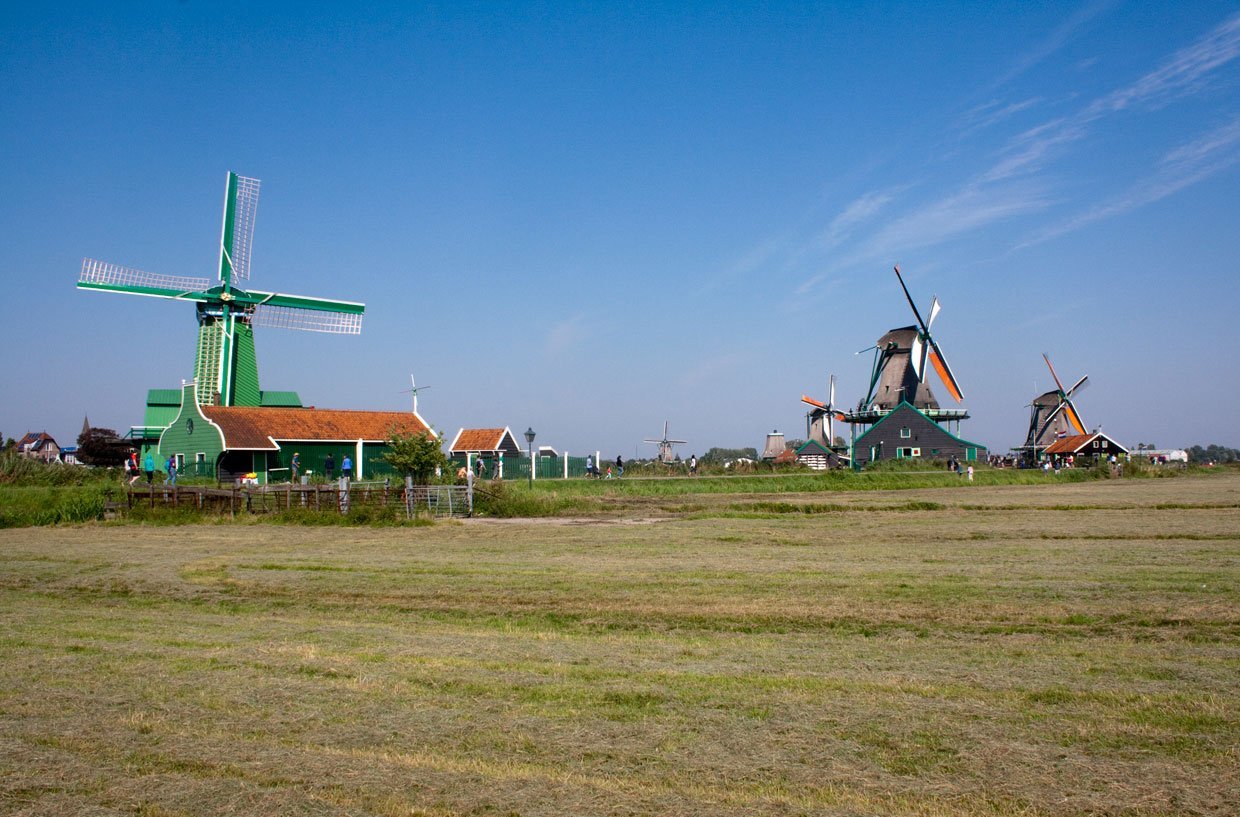 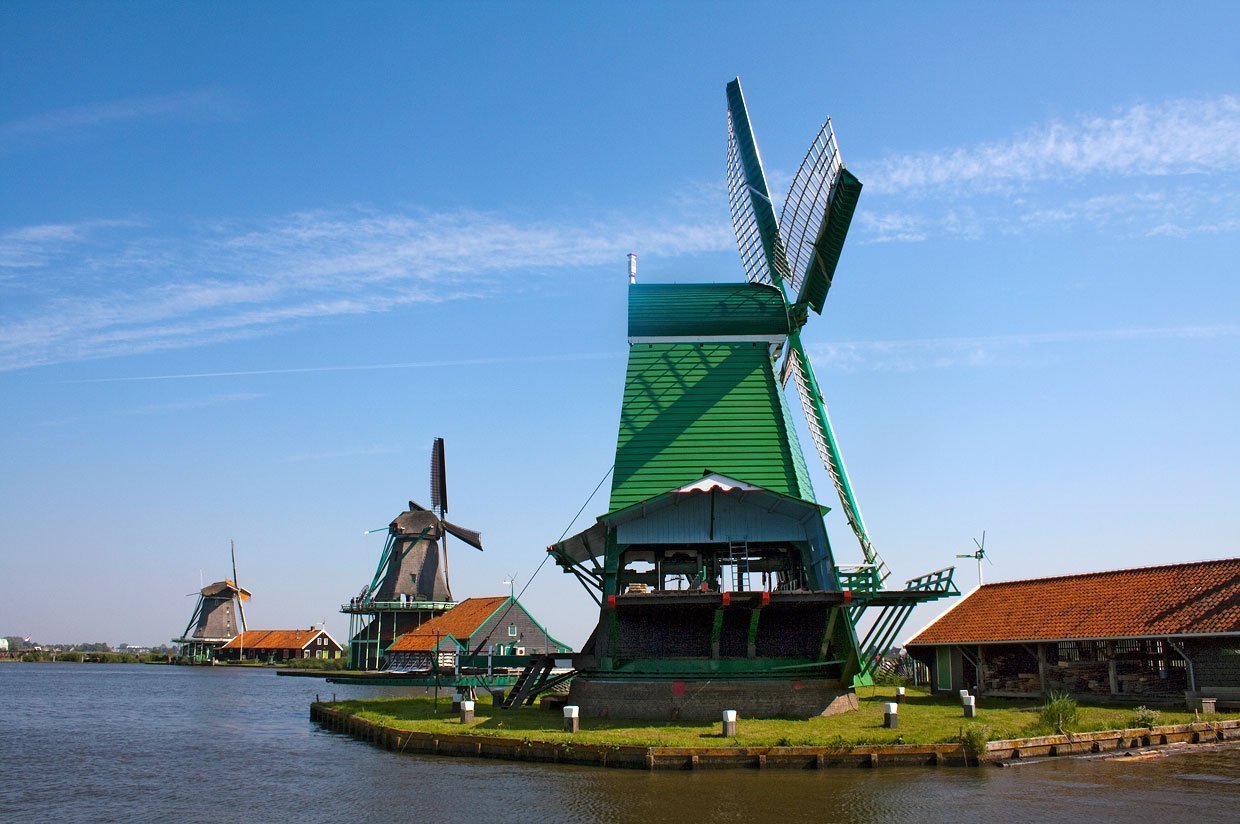 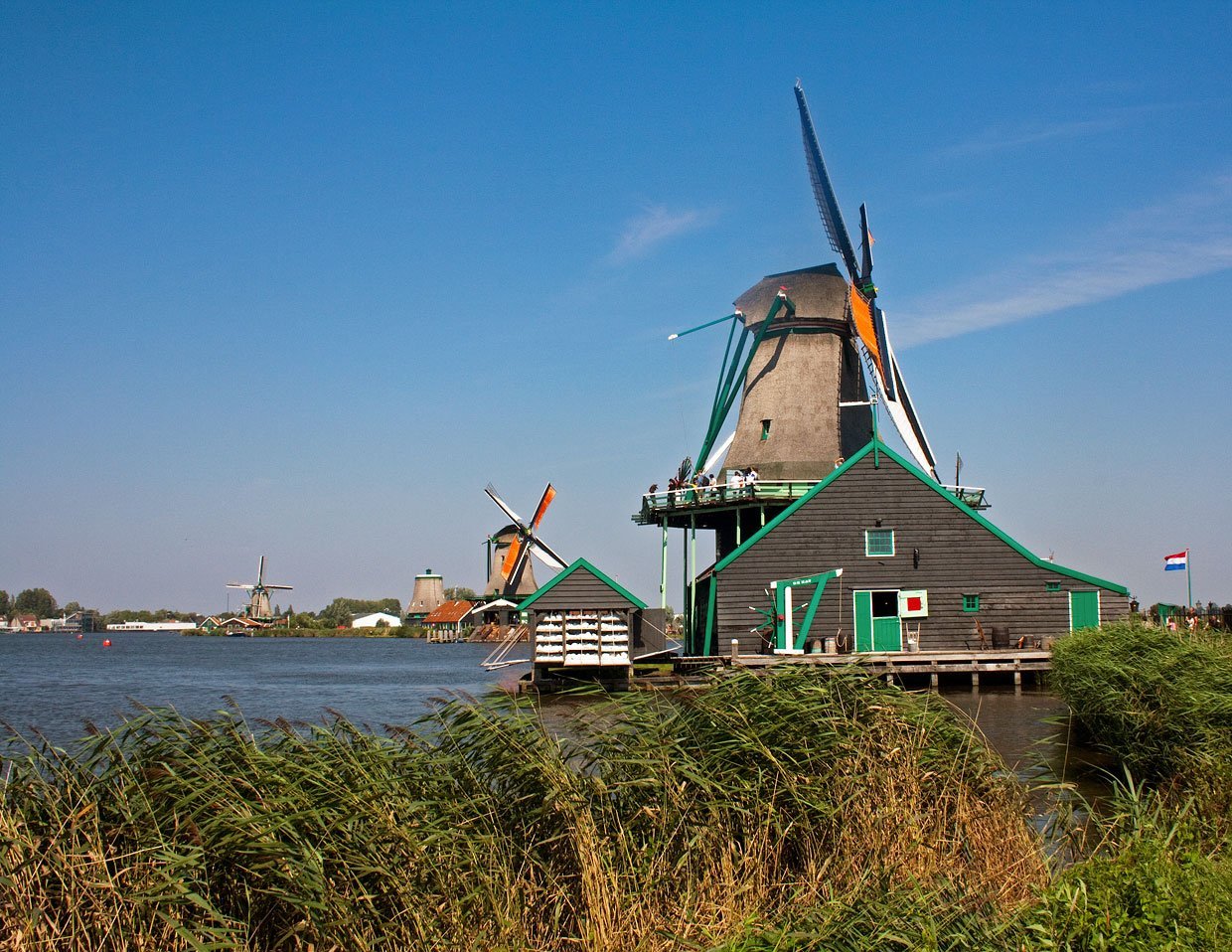 Pigments, terracotta colors from France and Italy. 80 Kilos an hour of Umber, Sienna, Ochre, are all ground fine in the closed mill chamber. The product is sieved before being turned into oil paint and pastels. Numerous artists from home and abroad are finding their way to the mill as well as many museums. The Rembrandt House and the Vatican museum take off the special pigments from ‘De Kat’. 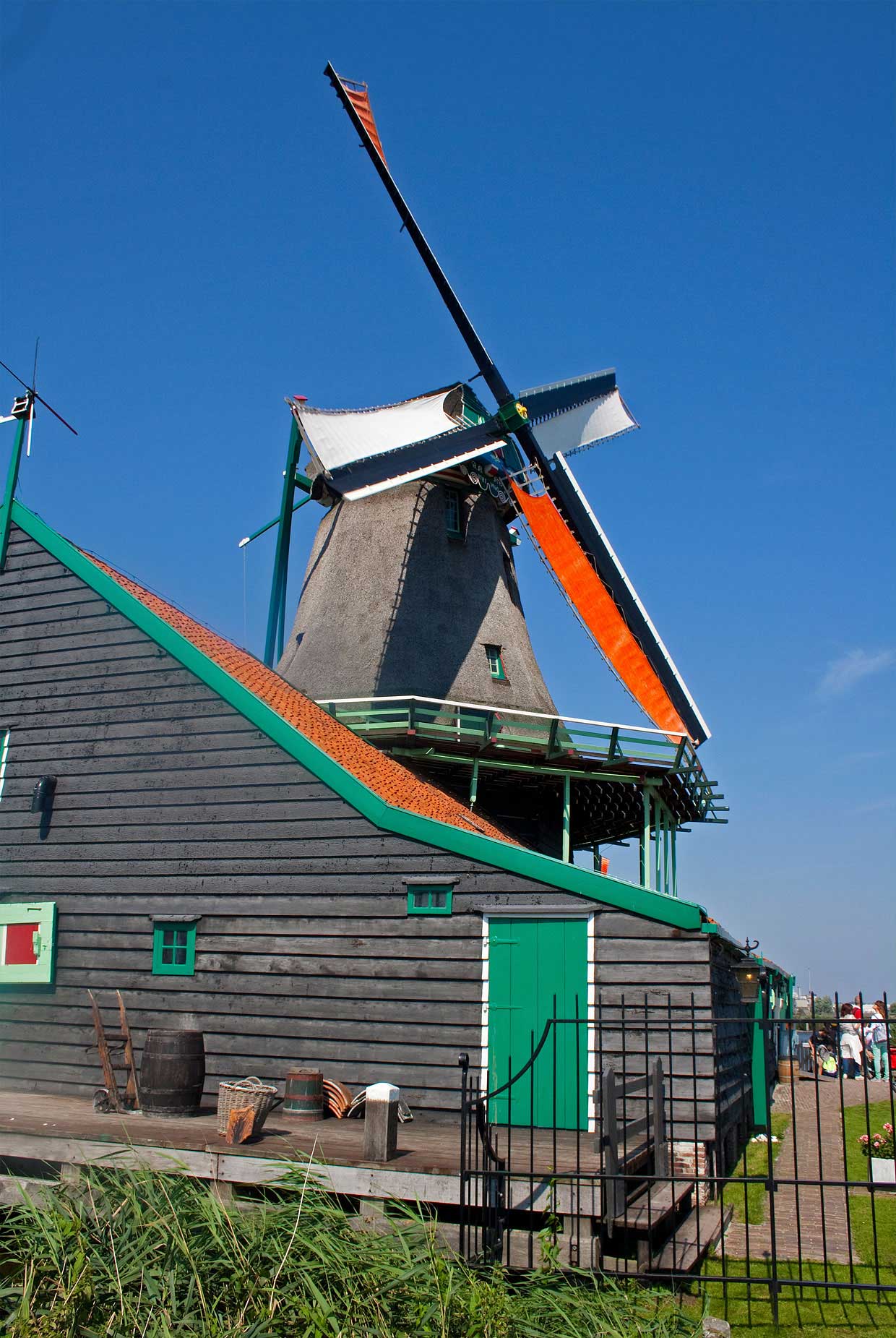 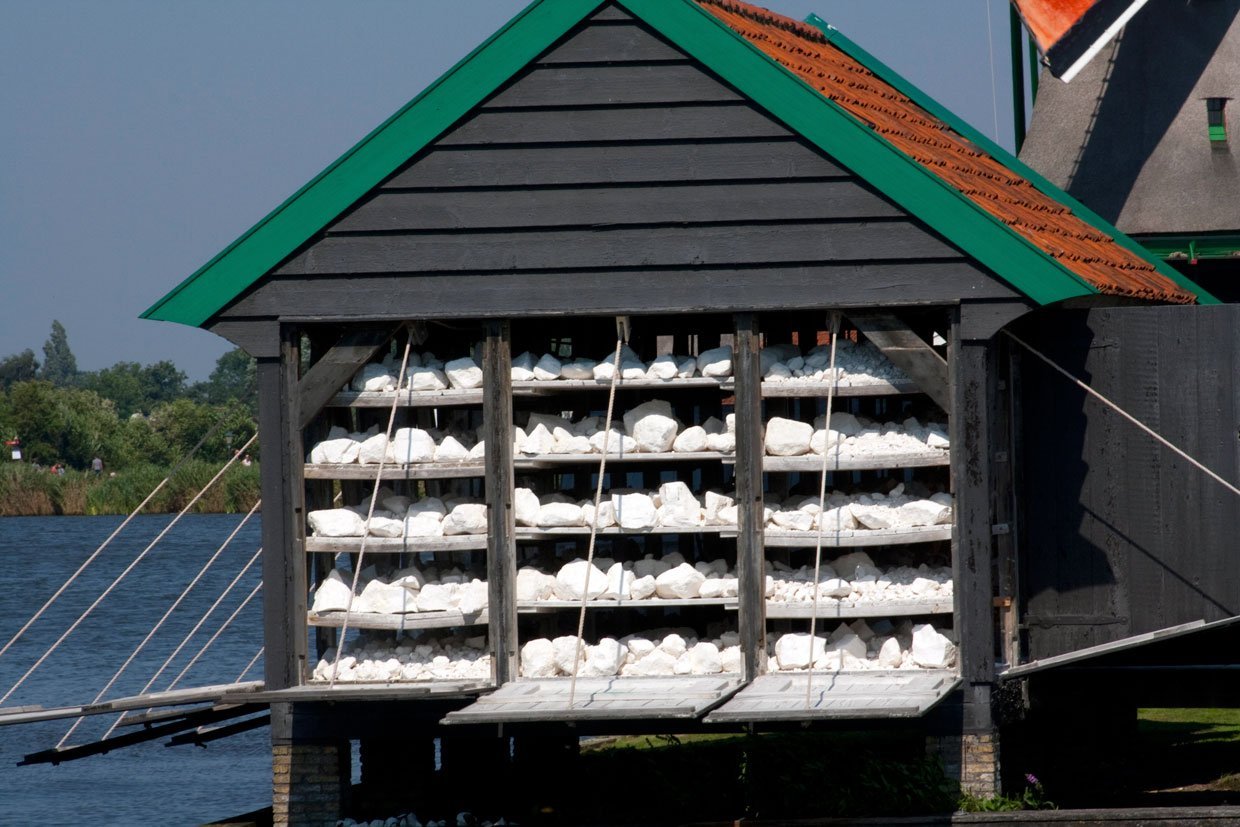 The next windmill I encounter is ‘De Zoeker’ (The Seeker). A very old windmill dated back to 1672 but it is believed that the mill already had been active for 60 years before that. It is the only oil mill still in operation, and one of five remaining oil mills in the area. This 18 tons weighing mill was transported here in one piece in 1968, which has been quite an operation. It had to be lifted over the overhead lines of the railway and transported over water to its final destination on the Kalverdijk. 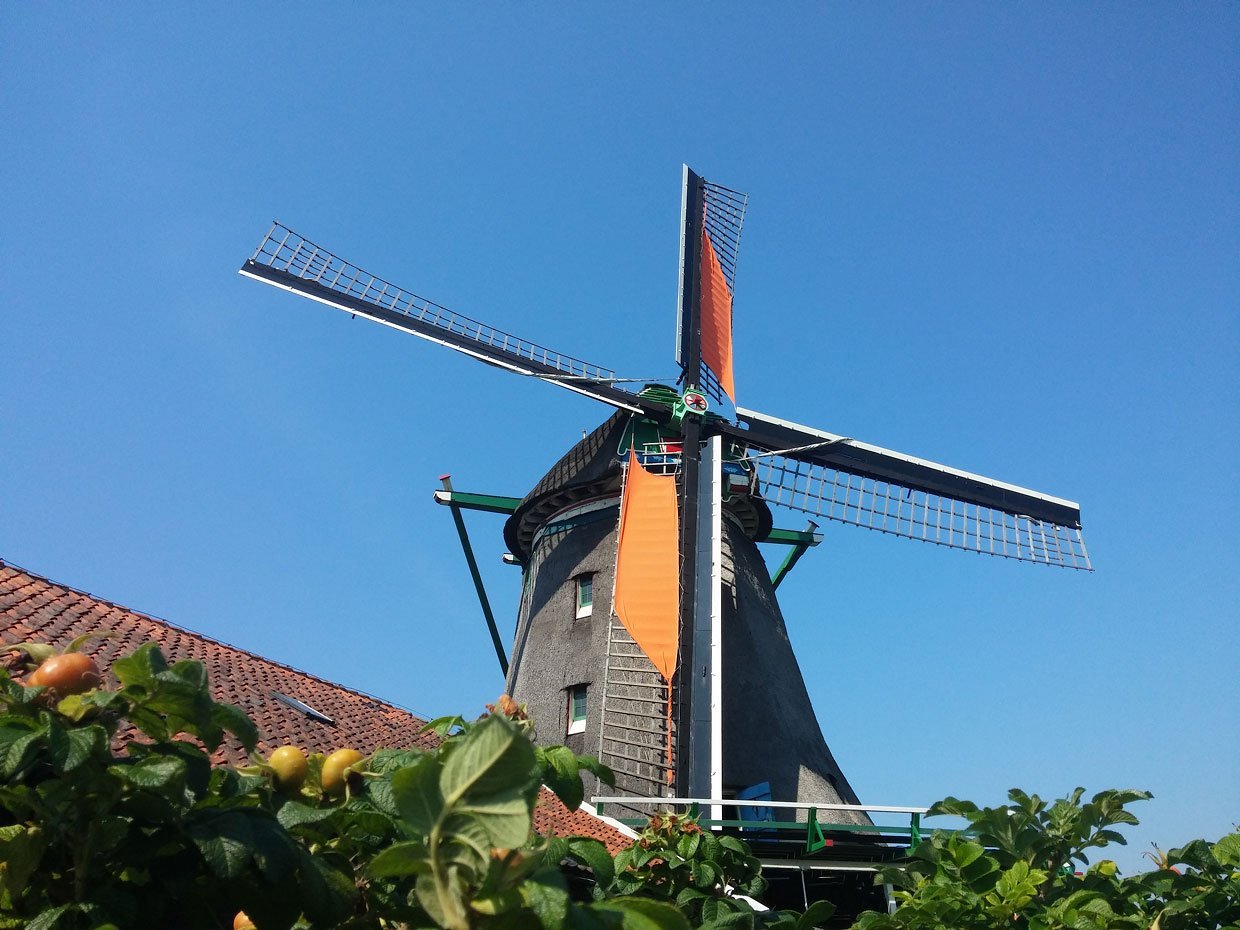 The mill you see today is a replica built between 2005 and 2007. During the process of rebuilding this windmill they used the 17th century construction methods and original drawings of Anton Sipman. Anton Sipman was a Dutch mill expert, writer and artist and had made some very detailed drawings of the original mill before it got demolished. 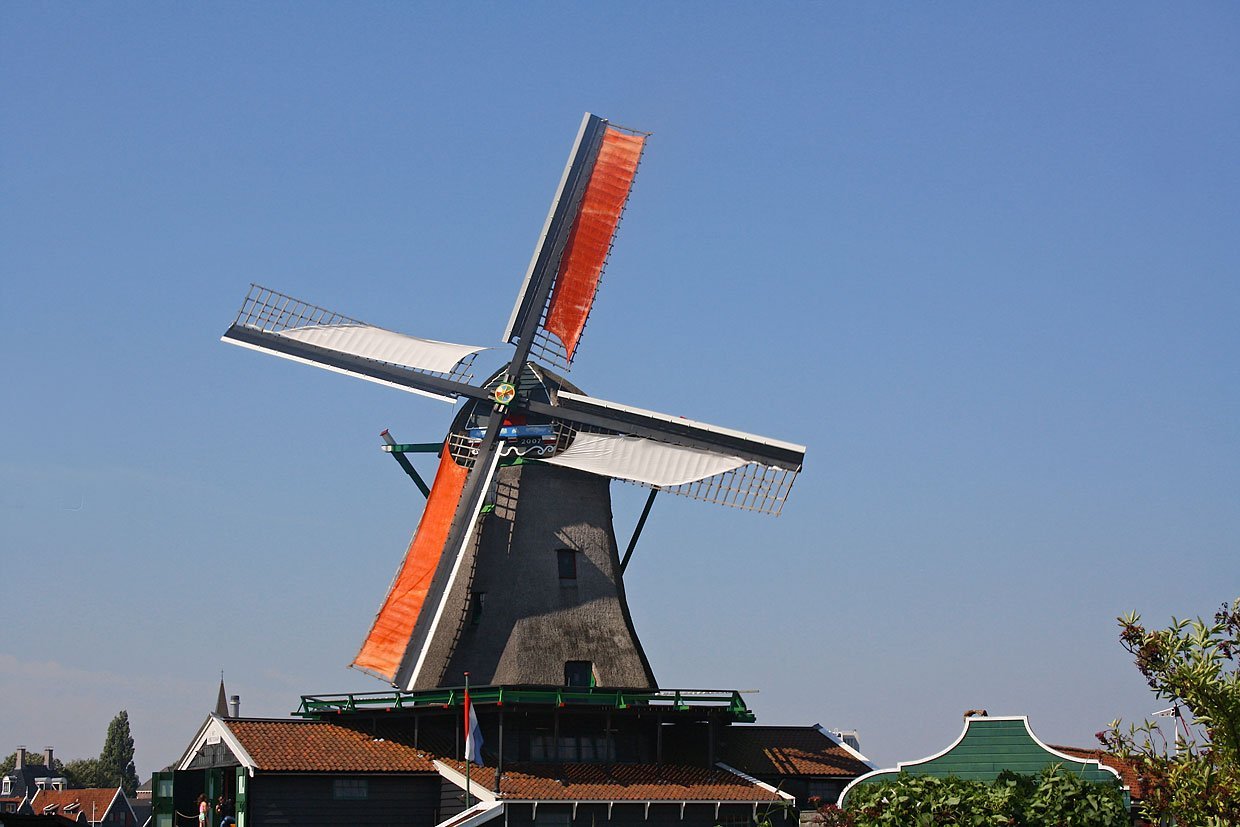 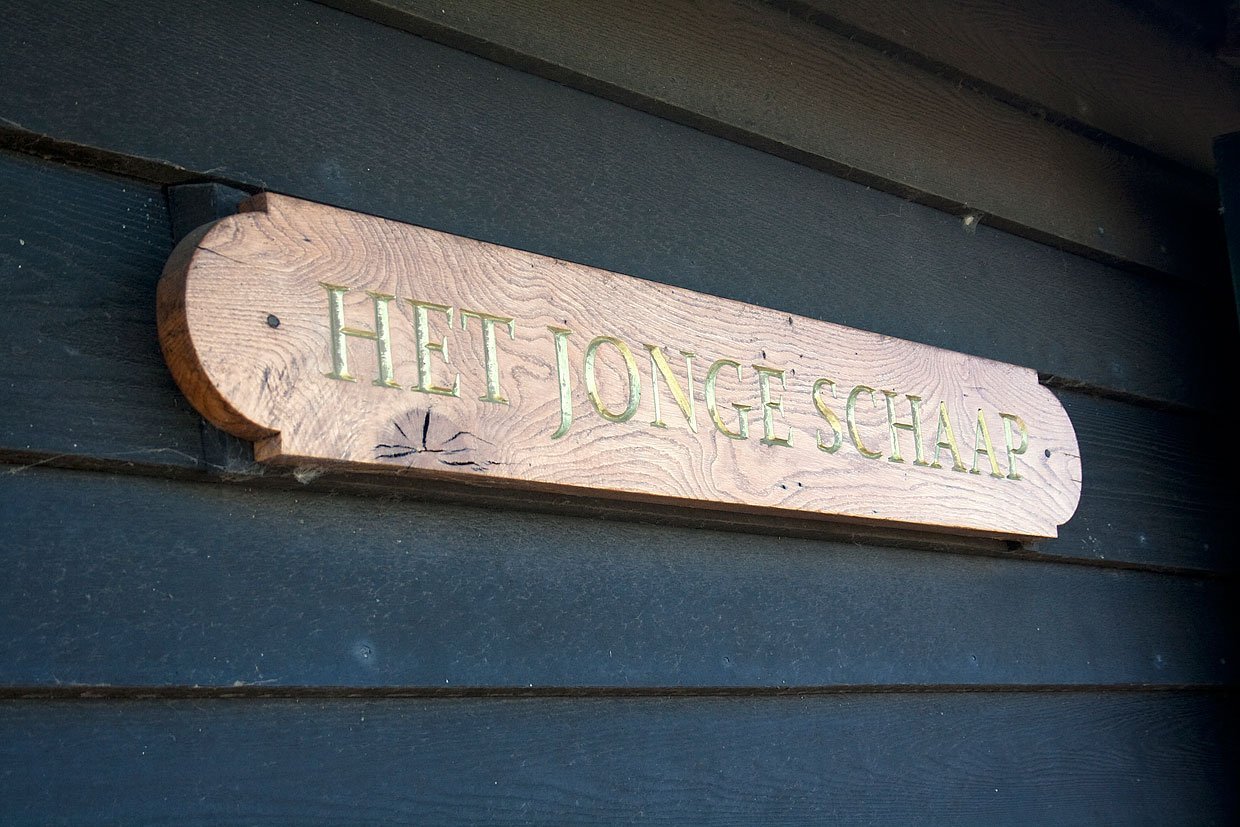 At this point of the walk get prepared for an unusual sight… A mill without hood and wings… Not just a special mark on this route but also in history. This is oil mill ‘De Os’ built in the beginning of the 17th century, one of the oldest industrial windmills in the Zaan region.  Until 1916 the mill did have a hood and wings and was powered by the wind. After the hood and wings were removed in 1916 the mill was powered by a diesel engine. It marks the transition from wind to other power sources, a milestone in the history of the mills. 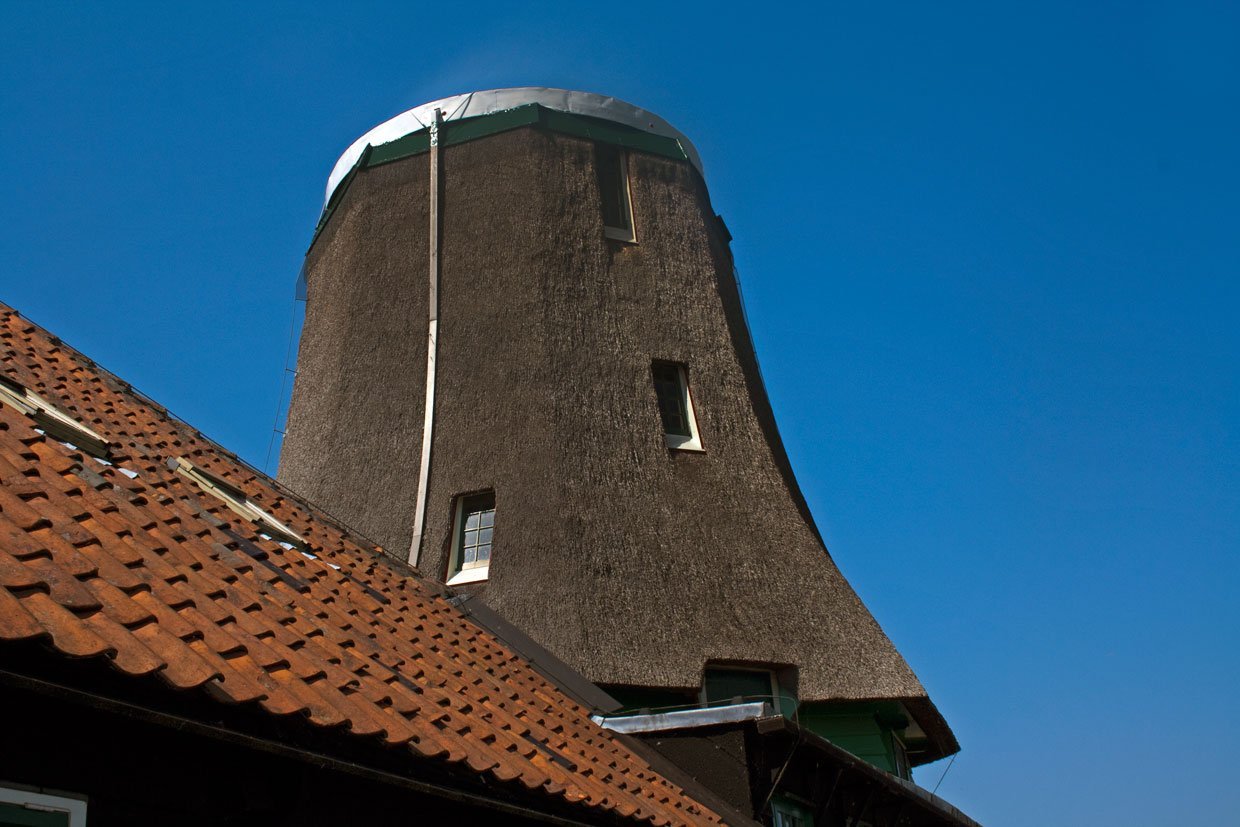 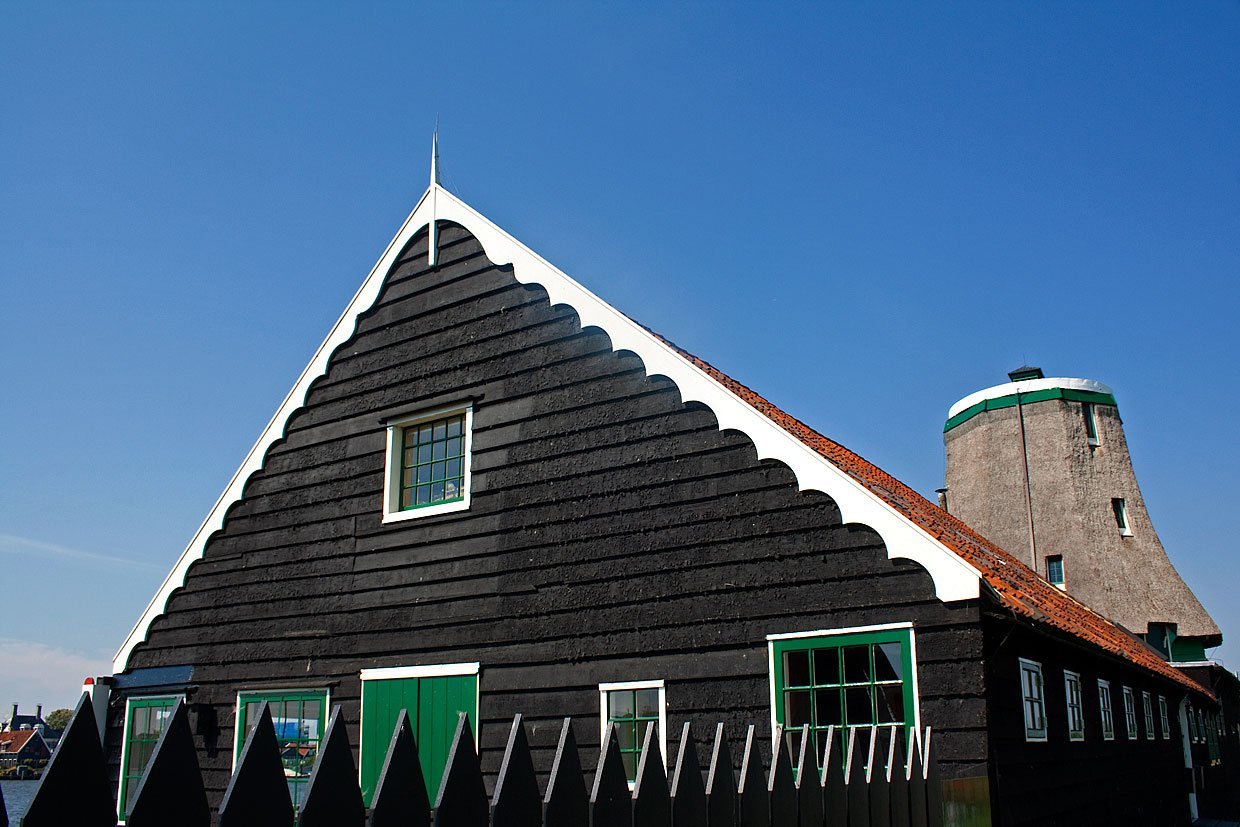 On the most northern part of the Kalverdijk you will find ‘De Bonte Hen’ (Spotted hen). Last but definitely not least! This indestructible oil mill, is a smock mill with shelf ( plateau around the mill) and was build in 1693. It used to made oil from grinding seeds. Why indestructible you say? The mill was struck by lightning and fire, several times. Time after time the fire was extinguished right on time and one was able to repair the damage. In 1975 the mill was completely restored to its current state. 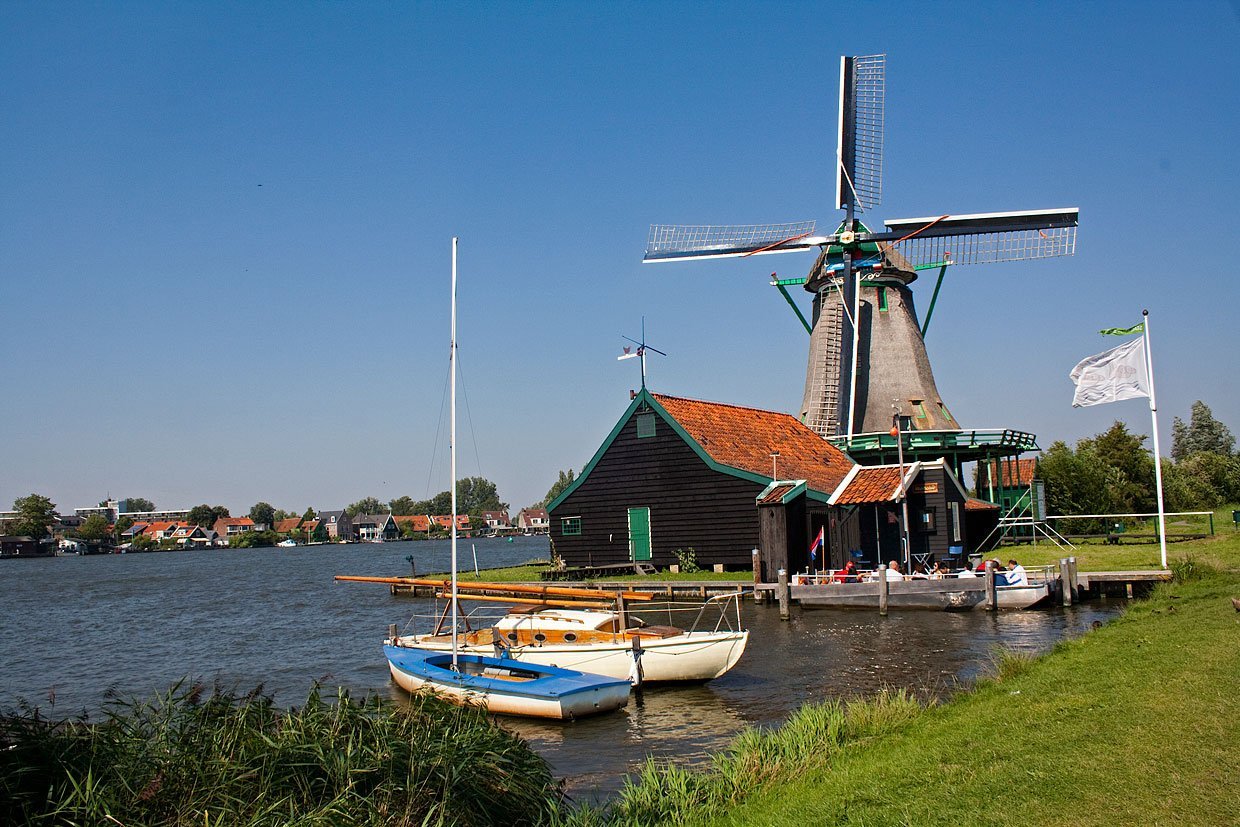 Graphic designer and illustrator with a great passion for photography. Founder of JustC Creative Design Studio.