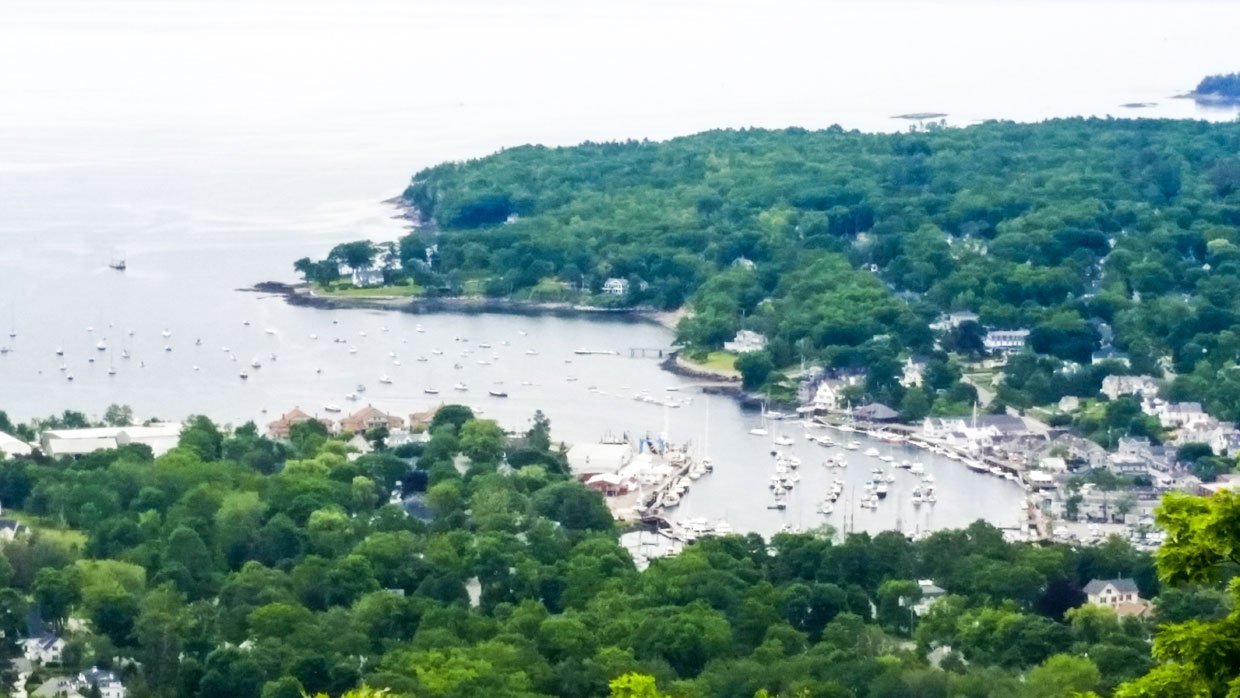 Sometimes I get in the mood to go somewhere I haven’t been. It’s kind of hard to find a new place to visit in New England, since I’ve been to every state, most multiple times. I wasn’t expecting much when I decided to visit Maine again, since I’ve gone to the ocean often. I decided to go a bit further north than usual this time, to Camden.

Knowing nothing about Camden, I rented a cabin next to the ocean. It was actually much cheaper than I thought I would have to pay this time of year. I figured it was because Camden isn’t a very sought-after place to visit in the summer. Driving through the town of Camden towards Glenmoor by the Sea, the place I would be staying, I was pleasantly surprised by the quaint little shops. I couldn’t wait to come back and walk around to see what could be found!

Checking into the cabin was another pleasant surprise. The cabins were perfectly-sized for a two people, and had a fantastic view of the ocean from the deck. The Adirondack chairs were inviting, but since I was running late for a sunset cruise I had booked, I couldn’t enjoy them right away. 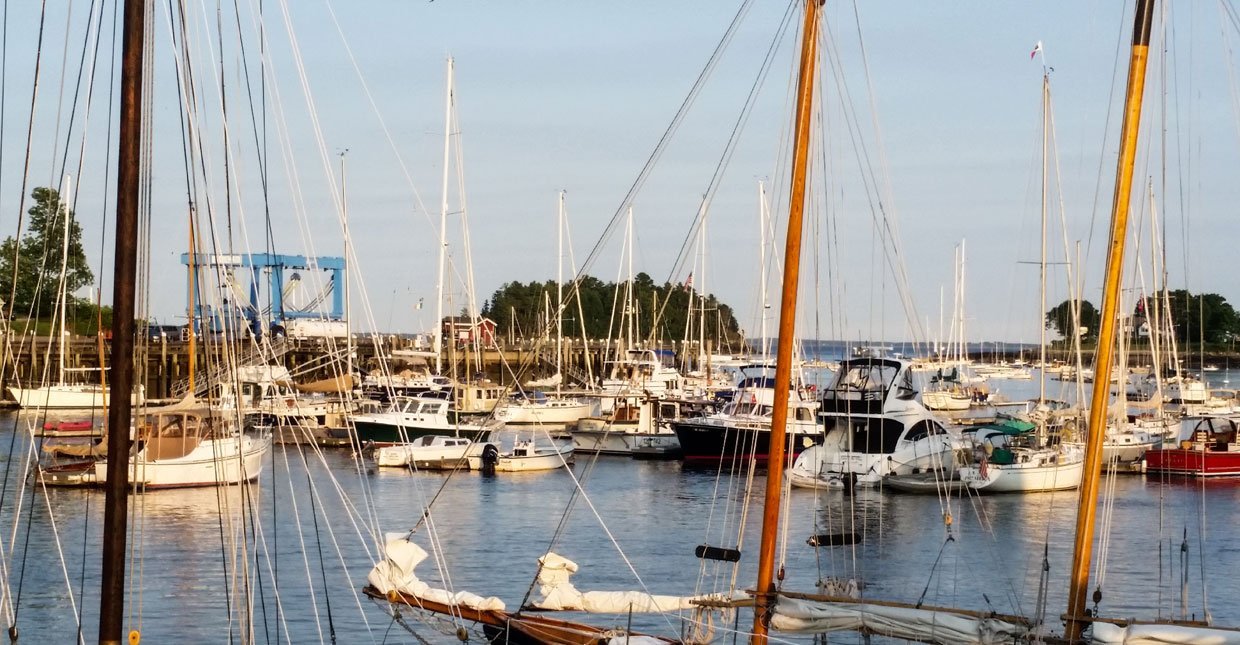 I headed back to Camden Harbor to check in for the cruise on the Schooner Surprise. I had a few minutes before the cruise, and hadn’t eaten anything for hours, so decided to grab a quick bite at Harbor Dogs. Again, I wasn’t expecting much. It looked like just a common hot dog stand, and I was expecting a hot dog. However, the menu offered hot dogs, hamburgers, fish tacos and sides. Since I was at an ocean town, of course I was going to try the fish tacos…and was I blown away! It was wrapped in a flour tortilla, which wasn’t surprising, but it tasted so much better because it was lightly toasted. The fish was fresh, the lettuce crispy, and the apple salsa was a sweet, tart surprise. This wouldn’t be the last time I visited this place for this very taco! 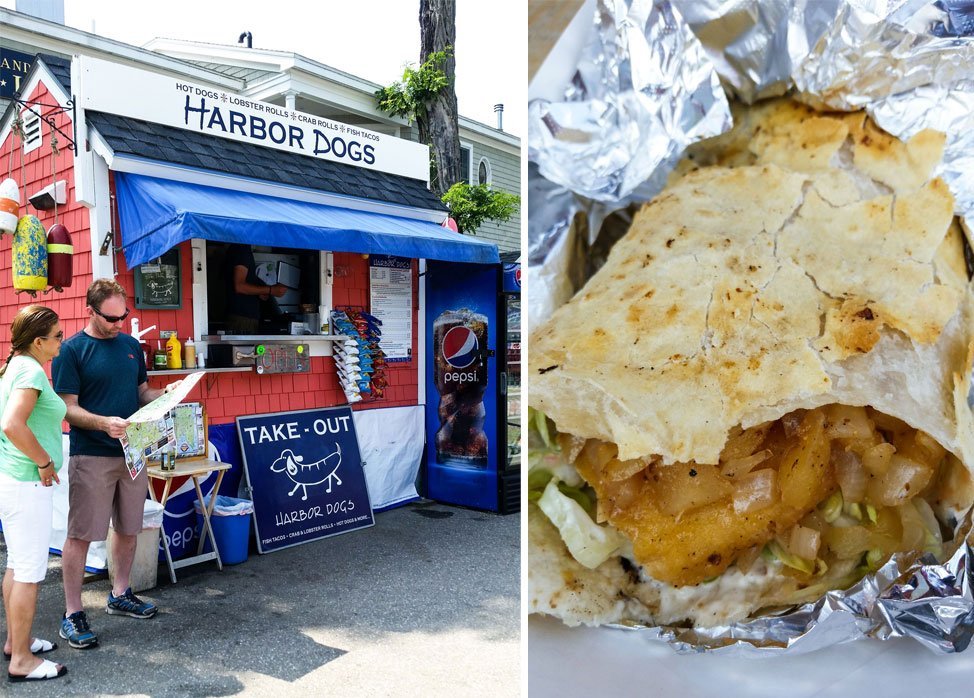 After eating, it was time to hop on the cruise. One of my favorite things to do is to be on a sailboat, and Camden offers quite a few options. There are cruises that take you to see lighthouses, sea lions, and puffins. I wanted to take all of them, but had to choose one. So I chose the sunset cruise with live music, and dessert, freshly made by the captain’s wife, Nicole. The cruise was way more than I expected! The sunset was brilliant, as was the live music, provided by a college student visiting home for the summer who played guitar and sang beautifully. 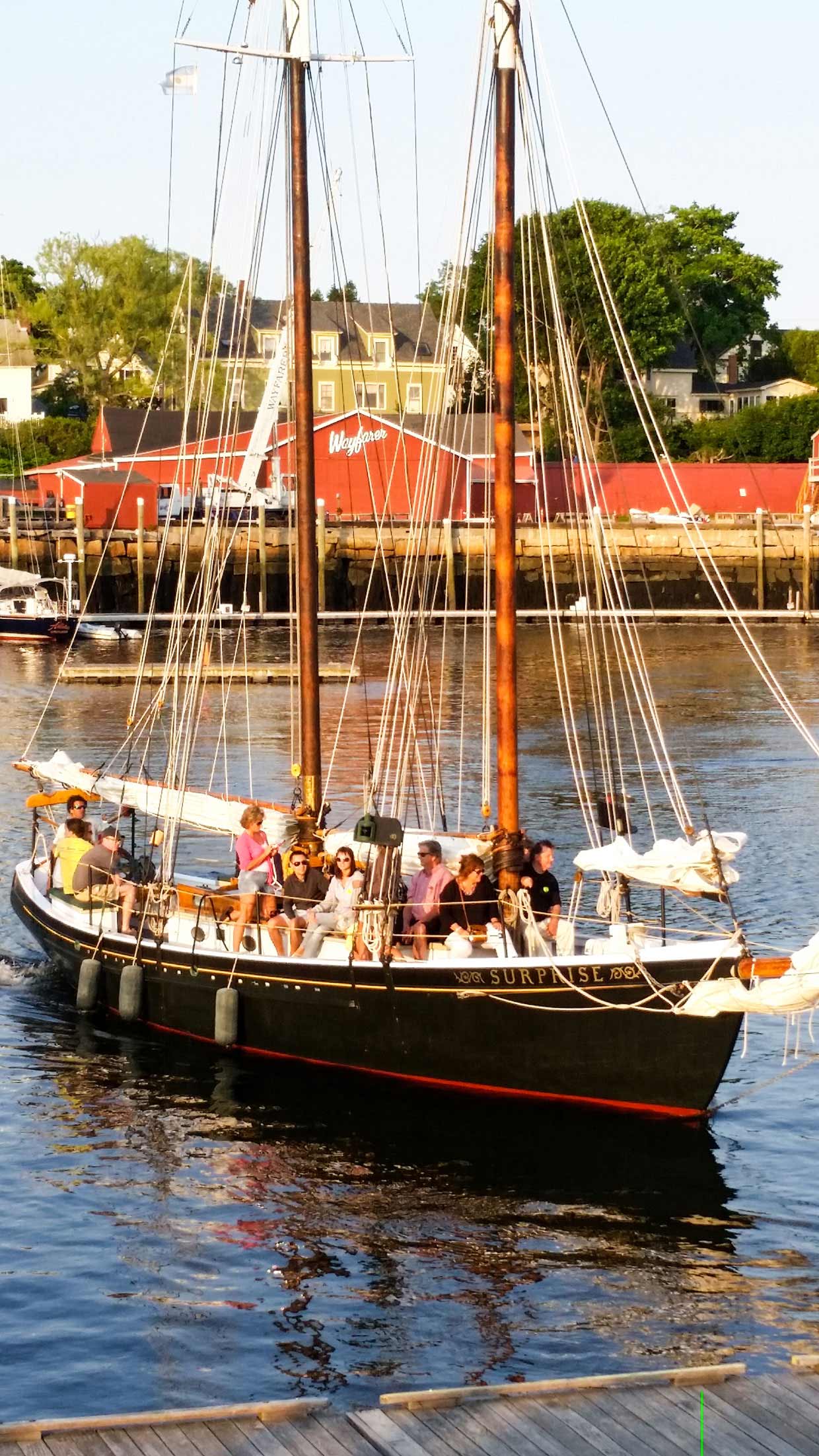 There were only about 15 of us on the sailboat, and the Captain allowed people to help raise the sails when it was time to cut the engine. It’s always so majestic to see the sails go up, and the flags flying. The Captain, Ramiro, is from Argentina, so besides the American and Maine flag ands, the Argentinian flag was proudly flying! Of course, a hearty discussion about soccer ensued after we were all settled again, because what good Argentinian doesn’t talk about soccer! 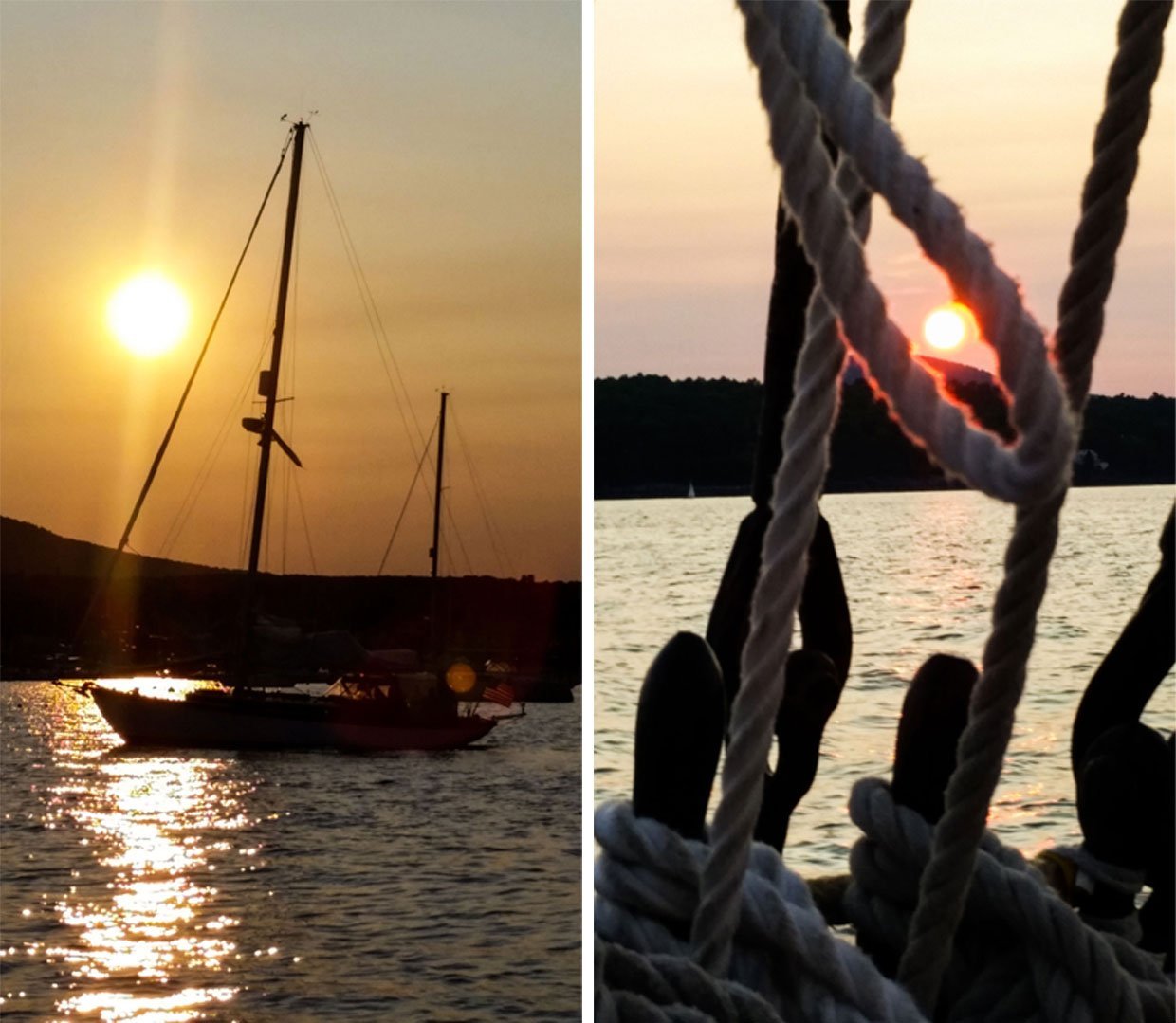 After the cruise, I immediately went back to the cabin. It had been a long day, dealing with holiday traffic. The bed was calling, and indeed, ended up being very welcoming and warm. After a good night’s sleep, I was awake early for coffee in the afore-mentioned Adirondack chairs on the porch. If you’ve never had the opportunity to sit in an Adirondack chair, you need to find one, and sit in it right away! They’re the most comfortable wood chair ever! They were strategically placed in every beautiful spot on the property, and welcomed you to sit for a spell. My chairs were overlooking the ocean, and it was a joy to listen to the birds chirping and the ocean rolling onto the beach.

Of course, I was curious about the beach, so after coffee, I took the long flight of stairs down to quench my curiosity. I was a bit surprised, as I had never been to an ocean where the coast was so wild and rocky, covered in seaweed. It was fun to find a few seashells, and they became my inspiration for a quick photo shoot! 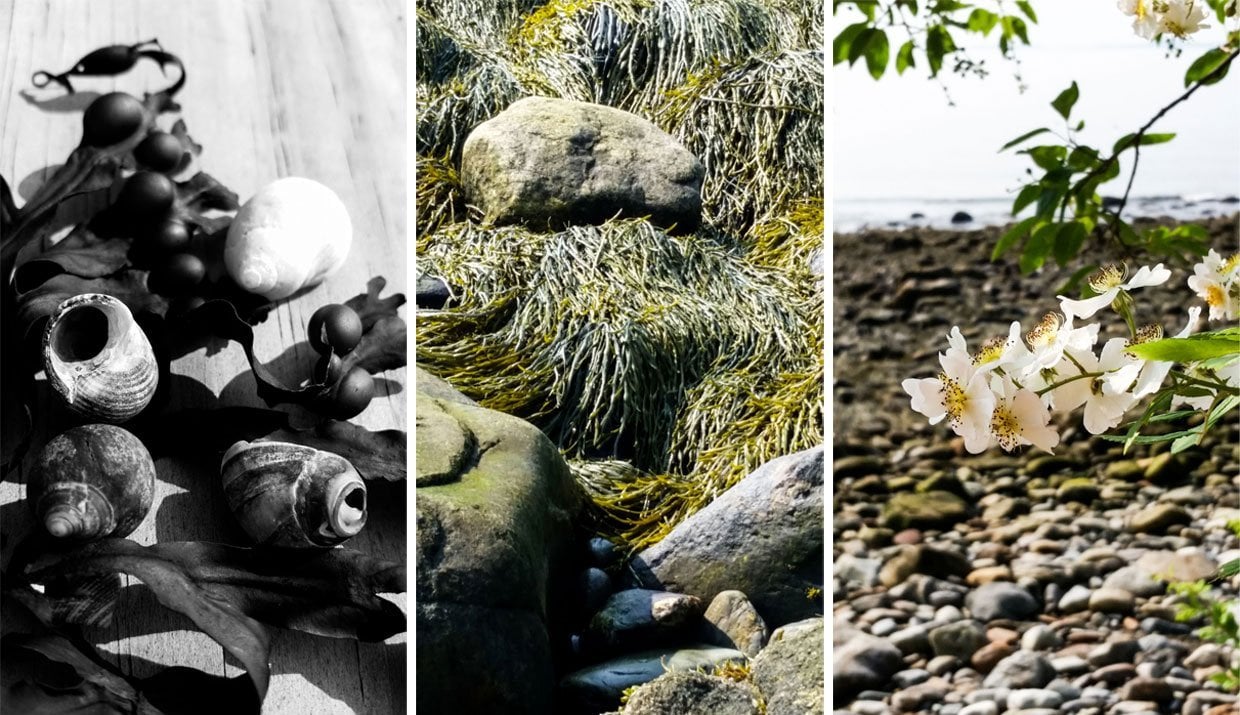 About now, my curiosity was getting piqued about the town I had driven through the evening before. After a quick breakfast, it was off to stroll and shop! The town was just as adorable as I had imagined, with a multitude of gift shops, where Maine blueberries, everything made out of wood, and anything ocean related could be found. It was a little cooler than I expected after the sun hid behind the clouds, so I bought a lovely, soft Maine sweatshirt.

At what I thought was going to be the end of my stroll on Main Street, I saw a canal and became curious. I turned the corner, and a little further up, stumbled upon the most adorable walkway ever, which crossed over the canal. Of course, I had to traipse across it, and came to an even more adorable ice cream stand called River Ducks, which serves all kinds of Maine-inspired hard ice creams. Now, I’m not supposed to be eating things that have a lot of sugar, but even I couldn’t resist a kiddie-size scoop of Maine Lobster Tracks, which is vanilla ice cream, lobster-colored chocolate cups filled with caramel and éclair crunch. Yum! They also have local favorites like Maine Wild Blueberry, Maine Black Bear, and a national favorite, Moose Tracks, which is to die for! 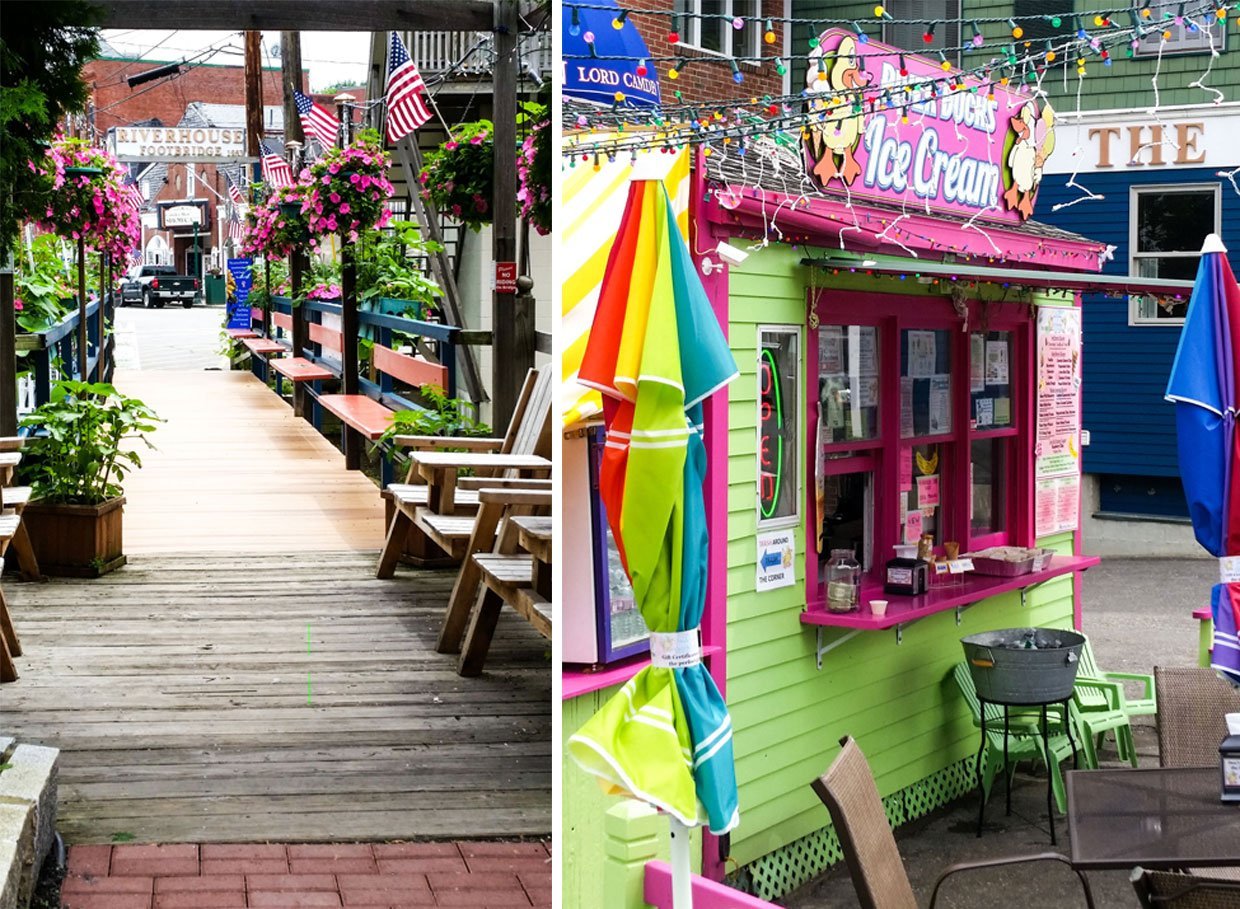 After a nice cool-down, it was time to head up to Mount Battie in Camden Hills State Park. There are plenty of hiking trails leading to the top, but for the sake of time, I drove. Again, I was astounded by the unexpectedness of what the area has to offer. Once at the top, I shimmied down the cliff a little ways to get a good view of the Harbor, far below us. It was so beautiful, I wanted to stay forever! 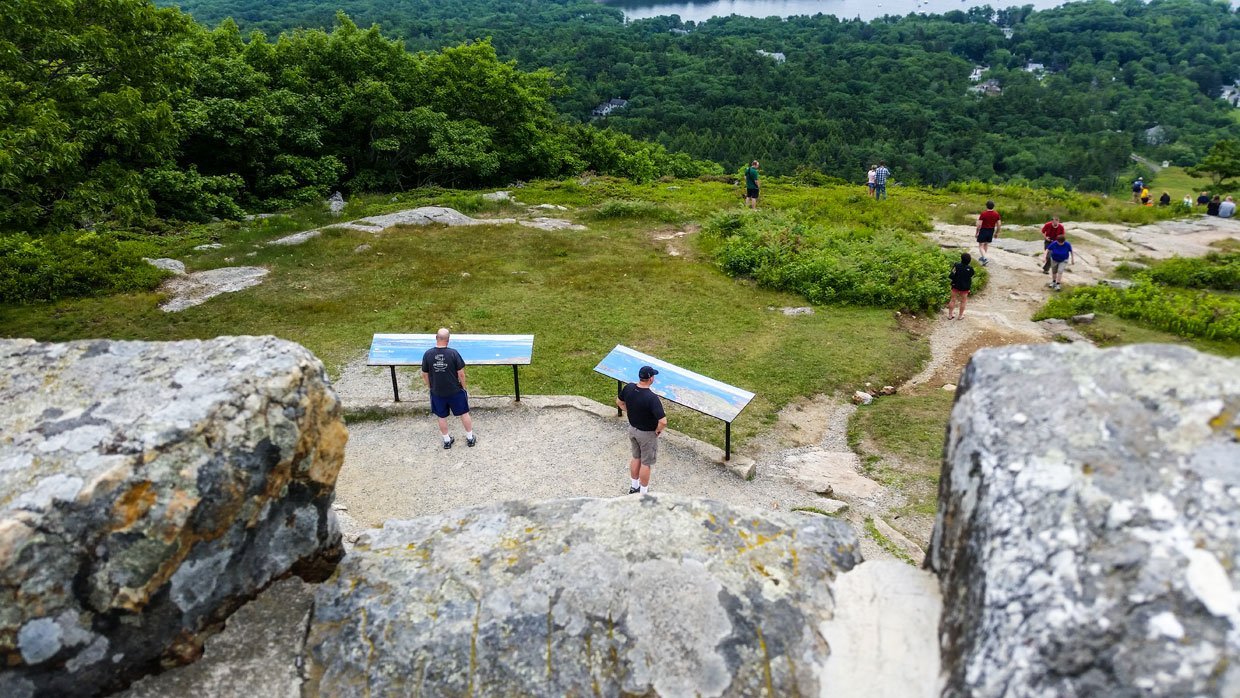 For an even better view, I climbed the steps of Mt. Battie Tower, which was built to commemorate the site of an old carriage house. The carriage house was burned in a fire, and the tower constructed. The views from there were even more incredible! And even though I really did want to stay, I already had plans to have dinner with some of Maine’s incredible seafood!

There was one restaurant recommended that I was dying to try: Cappy’s Chowder House. The waitress informed us of all of the specials, and I wanted to try each one. I settled on the seafood chowder and swordfish, which had just been caught and cut that very day. The chowder was a delicious mix of shrimp, lobster, scallops, crab and clam, with beautiful potatoes and a creamy sauce. It was thick, and just what was needed for a cool night. And I can’t say enough about the swordfish! Thick, meaty, juicy and served with a beautiful pineapple salsa, greens and garlic mashed potatoes. 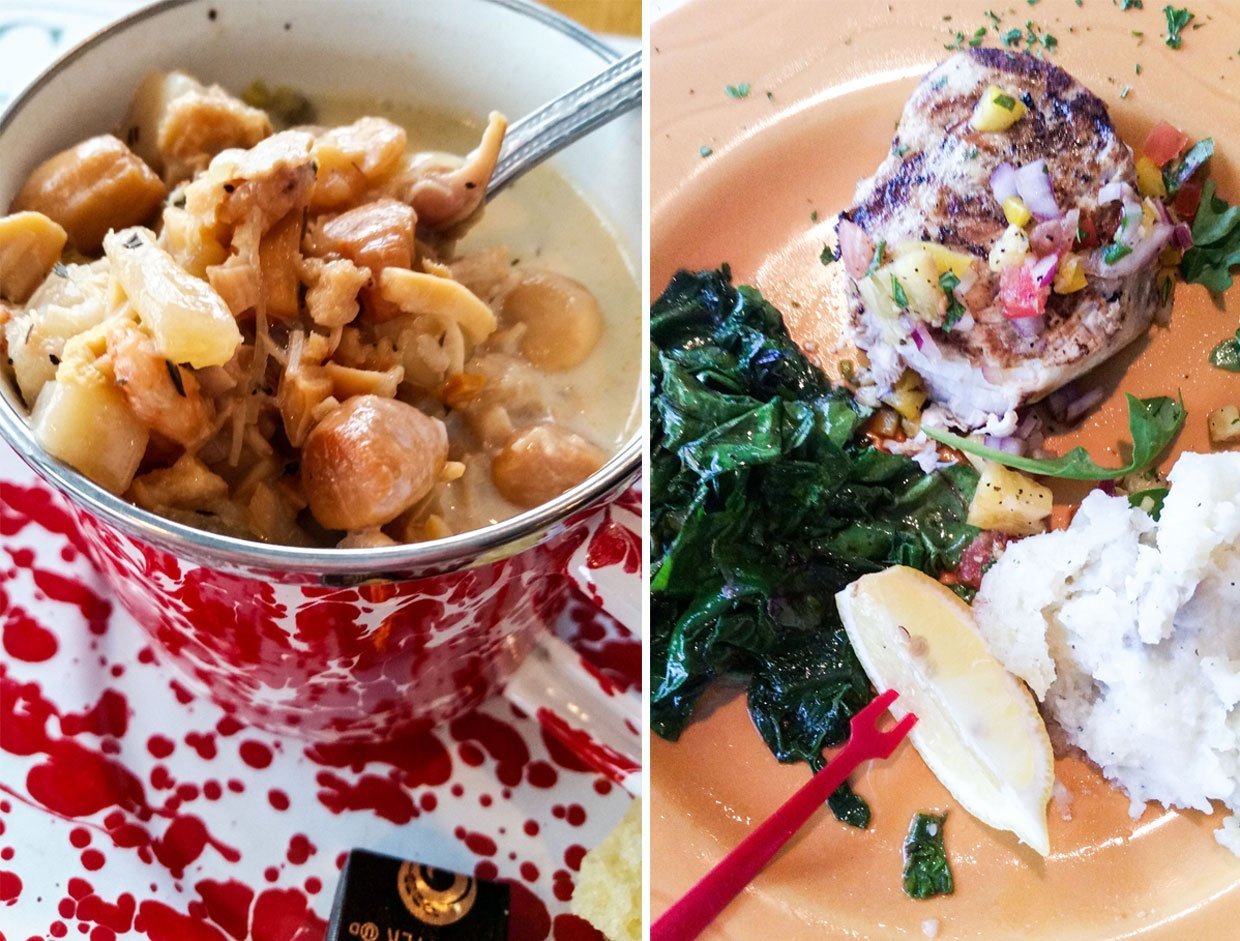 The day was done, and sleep was coming on again. I had to get back on the road tomorrow…back to New York. But not before another stop at Harbor Dogs for a fish taco!