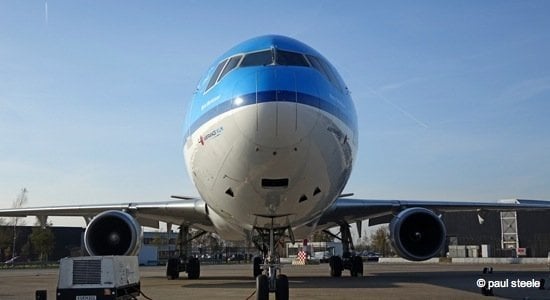 It was a day to head for a flight, but no ordinary flight. It was the day that KLM would be running the final passenger carrying flights of the MD-11. I was honoured, courtesy of KLM UK, to be taken out there from my KLM regional departure airport of Manchester. Ready to be on board this unique flight and to be part of this farewell passage at Amsterdam Schiphol Airport.

For many aviation enthusiasts the MD-11 was a special plane, ever since it replaced the DC-10s in the 90s. The unmistakable sight of its 3 engines, plus I have received so much feedback regarding the extra legroom on board they will miss. The mood even in the departure lounge for this flight was full of a mix of nostalgia and excitement.

On board, even before we took off there certainly was a party atmosphere brewing up… And almost immediately after takeoff you knew you was on a special flight! The destination was back to Schiphol of course but via an one and a half hour circular tour of the Netherlands. Mainly at between 2000 – 5000 feet only, but we had also been given special permission to fly over Rotterdam at just 1700 feet!! This certainly was special.

All along the coast, over the cities, over the landmarks, windfarms and striped fields! Quite remarkable.

Behind everyone running around getting views out of the window there were KLM crew staff in extra buoyant nostalgic mood plus a group doing the conga up and down the aisles. Surreal party mode for sure.

Alas it was time to buckle up and land back in Amsterdam, but, the surprises did not stop there. Straight from disembarkation there was a classic parked beside us on the tarmac… A DC3 nonetheless. A rare chance to get close up and inside one of these gems.

Just looking at the dials boggled me! I tip my hat to those flying these things for sure.

And a great way to sign the farewell flight off was looking across to that final, now to be no more, passenger MD-11, from the cockpit of a DC3.

I do have a soft spot for Schiphol airport to be honest anyway. People always ask me which has been my favourite and this airport would be right up there on a list. A central transfer hub that many people pass through on their travels in foreign lands. It does it so well though. Transfers are so easy, the shops are a plenty, passage is swift and thorough, the info boards are easy to navigate, so many get some of these things wrong as we know. When I travel long haul I would choose to transfer from UK via Schiphol for my connection no question. Plus they now have free WIFI for 24 hours a day 😉

Alas it was time to head back to Manchester having taken in a remarkable day over here, truly memorable and unique.

It is not just Manchester that you can head out from within UK, as you can also depart from 14 other regional airports across the UK including Bristol, Cardiff, Humberside, Leeds-Bradford, Newcastle and Norwich.

This video from KLM has a great and humorous look at how flying from local airports has great benefits: