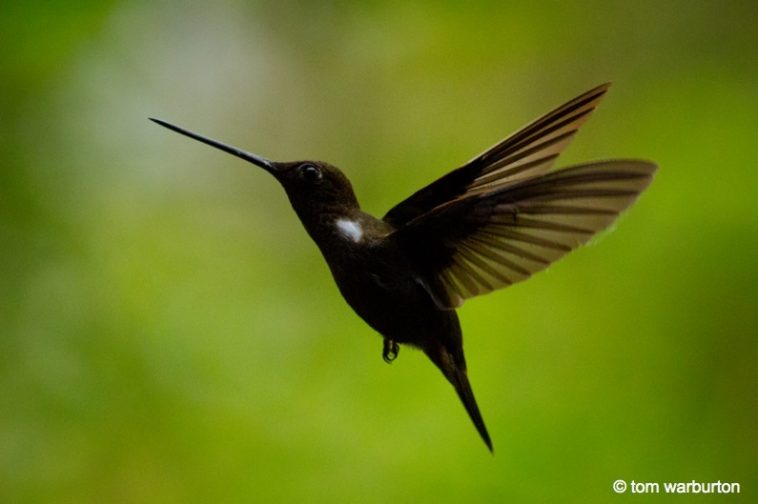 The Mashpi Biodiversity Reserve in Ecuador is a part of one of the greatest biodiversity ‘hot spots’ on the planet. This ‘hot spot’ is a rainforest called the Chocó which extends from Panama in the north to Ecuador in the south, squeezed between the Pacific coast to the west and the Andes to the east. Its position to the North of the Equator (although a little bit is South of the Equator) and running to North to Panama together with the vast range of altitudes (from sea level to 2,500 metres) have been a key factor in creating what is not an exaggeration: mega-biodiversity.

The Panamanian and Colombian portion of the Chocó are relatively intact but it is thought over 95% of native forest in coastal Ecuador has been cleared, making it one of the most threatened tropical forests in the world.  One piece that does remain is the Mashpi Biodiversity Reserve, protected as part of a private reserve since 2004.

There is a hugely positive back story to how this precious place came to be protected – I will try and tell you what I understand of this in my next blog – but for now I just want to try, if I can, to communicate to you why this place is so special and give you just a small glimpse into its treasures.

All you really need to know is that the Chocó forest supports huge numbers of plant and animal species – many of which are endemic (found there and only there). For example, there are approximately 830 bird species (if you include migrants) of which 85 (10.2%) are endemic.

The southern portion of the Chocó (where Mashpi is located) is particularly important for birds, with more than 40 bird species and 140 subspecies being endemic. By way of comparison, in all of North America (Mexico, Canada and the United States) there are around 800 species of birds (including migrants). North America covers over 9 million square miles. The Chocó biogeographic region extends over a mere 72,000 square miles. So if my (very) rough maths is right the Chocó is about 12 times more ‘bird bio-diverse’ per square mile than North America.  Some of the birds are easy it see – for example the mossed-backed tanager shown was photographed right outside the Mashpi Lodge dining room door!

It is thought that the Chocó forest supports an estimated 9,000 vascular (higher) plant species.   Approximately 25% of these (2,250) are endemic. To compare: Italy has only 5,600 vascular plants across its entire territory.

Mammal diversity is also high, with 235 species, 60 (25.5%) of which are endemic. The Ecuadorian Chocó alone is home to 142 mammal species, of which 15 (10.6%) are endemic to the region.  The Mashpi lodge camera traps have photographed Puma, Ocelot, anteaters, paca, collared peccaries, armadillos, margay and many others.  Your chances of seeing these mammals directly are slim – but its great knowing they are outside your door at the lodge – and Carlos the Mashpi lodge ecologist gives a great talk on the forest and it’s riches.

It is possible this individual above one of a yet under described species that lives at higher altitude.  The individual was very carefully collected by Carlos the Mashpi Ecologist and will be DNA tested to check if it is a new species of sub-species

The Mashpi Biodiversity Reserve protects 1,200 hectares but the area protected as part of a Municipal Protected Forest extends to around 17,000 hectares in total – more of that in the next blog – as I said above 95% of the Ecuador Choco has been destroyed so this is a very, very precious reserve.

You can stay right at the heart of the reserve at Mashpi Lodge, – I will tell you more on that and how the reserve came to be saved from the loggers.