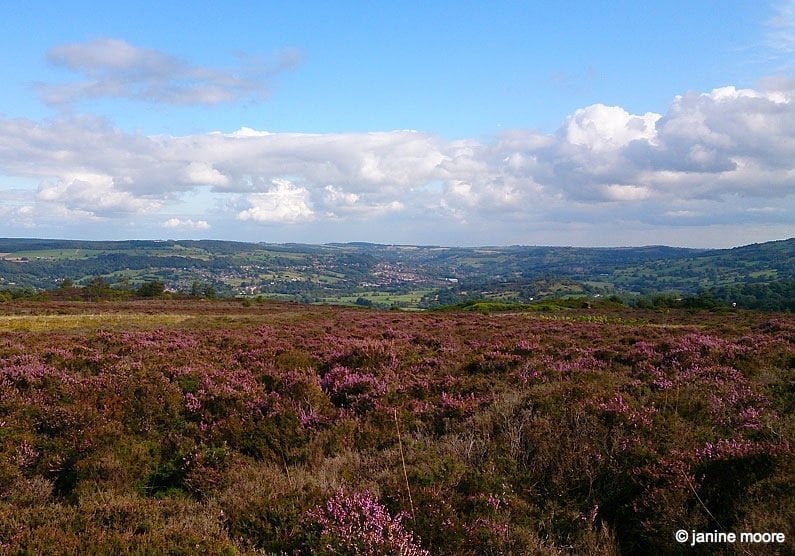 The Nine Ladies stone circle can be found on the northern end of Stanton Moor, an area of heathland in the Peak District. They are located roughly 3½ miles (5km) south-east of Bakewell

The beautiful Derbyshire Dales are often overlooked in favour of the more dramatic Peak District area, both of which I frequent quite regular, in fact I spend more time hiking throughout various haunts in Derbyshire than in my own locality.

An old favourite walk is at Stanton Moor, a stones throw away from the lovely quaint village of Birchover in the Derbyshire Dales. The first sight to greet me as I stroll along the moorland is the strangely shaped sandstone rock, nicknamed the Corkscrew for obvious reasons.

A landmark on the moor which has had metal hand holds added to it during the 19th Century.

Further along the ancient track it is easy to imagine life as it would have been lived here thousands of years ago, once home to bronze age man. If you look carefully you might see the bronze age burial mounds or the stumps from the ancient forest which once grew here.

The archaeologist Aubrey Burl described the area of Stanton Moor as “a prehistoric necropolis of cairns, ring-cairns, standing stones and stone circles.” It is 300m north/north-east of the Reform Tower, or (Earl Grey Tower) and to the west of the stone circle is a cairn cemetery containing three large Bronze Age ring-cairns.

This is a dedicated monument site and is protected under law, it has been used as a site for funerals, special ceremonies, farming and recreation.

One piece of history I find particularly interesting is the fact that this piece of moorland forms part of a prehistoric route that brought materials from as far a field as the Lake District, The Yorkshire Wolds, The Cheshire Plain, The Trent Valley and some say maybe even as far away as Cornwall.

The beauty and peaceful atmosphere of the moors make this a fantastic place to bring the family for a gentle stroll and a picnic among the heather.

I love to stop for a flask of coffee and a bite to eat sitting on a large rock along the edge of the moor, the views from the edge are stunning, you can see for miles, a place I love to linger.

A visit the Earl Grey Tower, or the Reform Tower, built by William Pole Thornhill and dedicated to the reform act 1832.

Before the Reform Act, voting rights were restricted to people who had significant property interests. This denied a vote to a vast majority of the population of men in the country.

The 1832 act reformed the English constituencies and reduced the required property qualifications. These changes expanded the electorate by about 50%.

But the passage of the act was not the end of the story, as the idea of “universal suffrage ” was not applied. Men also still had to hold property worth at least £10 to vote. Around 1 in 5 adult males were allowed to vote, and it wasn’t until 1918 that all property qualifications for voting were removed. By 1928, all women could vote too.

The person most responsible for the reform act was Charles Grey, 2nd Earl Grey, Whig prime minister at the time.

One of his supporters, Lieutenant Colonel Thornhills, who lived nearby the Stanton Moor area, had this tower built to commemorate the reform act and to honour Earl Grey who introduced the legislation.

My kids have always enjoyed exploring this area, it’s so interesting and at the same time mysterious with it’s bricked up doorway, (which is for public safety.) This majestic tower on the edge of the moor is well worth visiting.

Steam railway in the Valley

As we were exploring and playing hide and seek on a walk, we heard the eerie sound of a steam train’s whistle echoing up from the valley below, “woo-wooo!” and the “Chuff Chuff” as it travelled along the tracks, seeming almost surreal if you didn’t know about the local steam railway.

Peak Railway has a steam railway line in the valley which runs for a distance of roughly 4 miles and has stations in Rowsley, Darley Dale and Matlock.  They have regular steaming events and usually a Santa’s Special train too.

Before I leave the moors I always enjoy a visit to the Nine Ladies Stone Circle. A visit to Stanton Moor isn’t complete without seeing the stone circle built around 4000 years ago, one of four in the area.

You will find this is by far the most popular feature of the moorland, many people leave a small offering tied to the offering tree, just a small memento from a loved one that has been lost.

The peacefulness of this place is almost soothing to the soul. Legend has it that nine ladies were turned to stone on this spot for dancing on the Sabbath and that the King Stone was the fiddler.

On our walk we decided to head back as the weather had turned and the sky looked a little daunting. We took the scenic route along the edge hoping to get a glimpse of the steam train in the valley before it returned to its sidings for the night.

Max had to go back on his lead as we were heading toward a flock of the Swaledale sheep that had been introduced to the moorland to control the birch and bracken re-growth while encouraging the heather, which can be vibrant and beautiful.

Swaledale sheep are noted for their off-white wool, curled horns and white around their nose and eyes. Currently the breed is used mainly for the production of lamb/mutton. They are named after the valley of Swaledale in the Yorkshire Dales.

They’re most commonly found throughout the more mountainous areas of United Kingdom. But they are particularly found in the Yorkshire Dales, County Durham and around the Pennine fells of Cumbria.

This route took us full circle and back to civilization via the Corkscrew Rock where we began, and home again for tea.