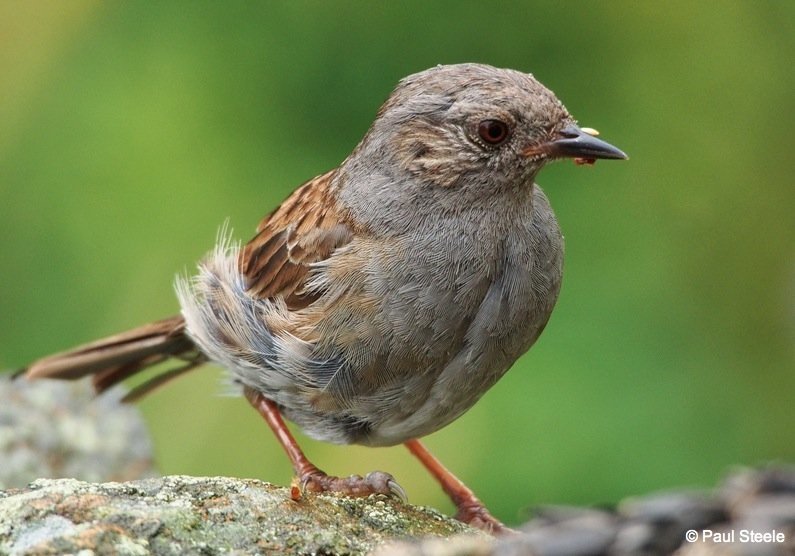 The Dunnock, whenever I am photographing at a garden bird table this little nervous looking bird is often to be seen. And very often from a distance can be mistaken for another common Sparrow,

I managed to capture this one seemingly daydreaming on the garden wall. When you see a Dunnock they are more than likely on their own.

Characteristically they shuffle as they walk along the hedges or along the ground near some cover. They are one of the few birds of this size that flick their wing as they move about. They always seem to look quiet, nervous and on edge. But, if it is a male and another male comes along then they come alive and get very animated and loud indeed.

They are about the size of a Robin and a similar brown feather tone of the House Sparrow yet the Dunnock has a lot more of a grey chest as you can see in the photo. They are from the accentor family of birds and although widespread throughout Europe and Asia, theya re the only one of the accentor family to predominantly live on low levels rather than mountains.

Dunnocks live on food that is in abundance and that gives them a presence all over the UK. Fruits and seeds in the winter and insects and spiders in the Summer.

In some areas where food source is less common this allows the females to practice a rare behaviour in this size and type of bird, polyandry, where a single female has the run of several males because territories are dependent on how much food is available in the area.

So if there is plenty of food in the area the female territory reduces and males can take over. Thus the Dunnock switches between polyandry and polygyny.

Why Is It Called A Dunnock?

The Latin name for this bird is Prunella modularis. The common used name of Dunnock is simply made from Old English, Dun (brown) and ock (small). Small brown bird.

If you want to attract the Dunncock to your garden have the feeder nearer to a hedge so it can do its shuffle to get near. They are very likely to head straight to the mess on the floor made by the other birds on the bird feeder like the blue tit or great tits.

If you are watching your bird feeder closely with a camera then also keep an eye on the ground. You may just see this grey breasted bird shuffling around on the floor.