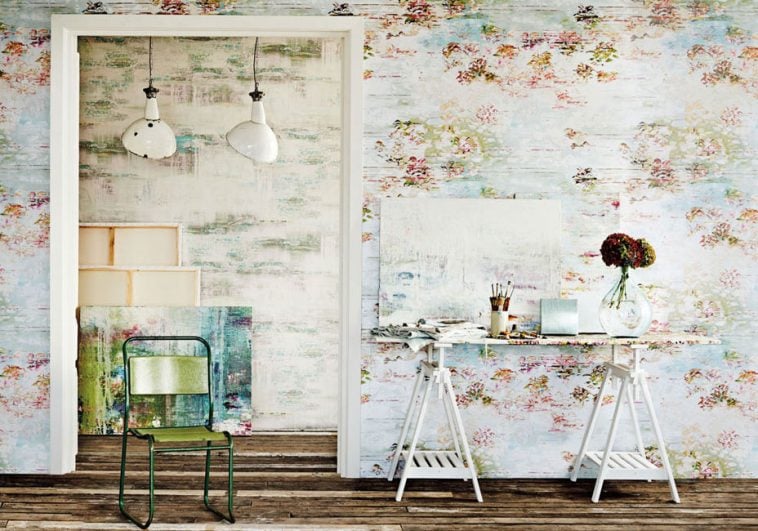 Beautiful, colourful and dreamy. Just three of many lovely words I think of when I see the painting work of Jessica Zoob. A truly delightful artist to know that works mainly with oil paint and painstakingly builds up then scrapes back layers with great spontaneity added in. I wanted to hear her thoughts on the process and to learn what inspires this great inspirer.

From the desk of Jessica

When Paul Steele invited me to be a guest on his fabulous blog I was very delighted but a bit daunted too! I absolutely love his photos and the way he describes his adventures and although I quite frequently find myself having adventures I don’t usually write about them! Anyway, here goes…my name is Jessica Zoob and I am a painter…. 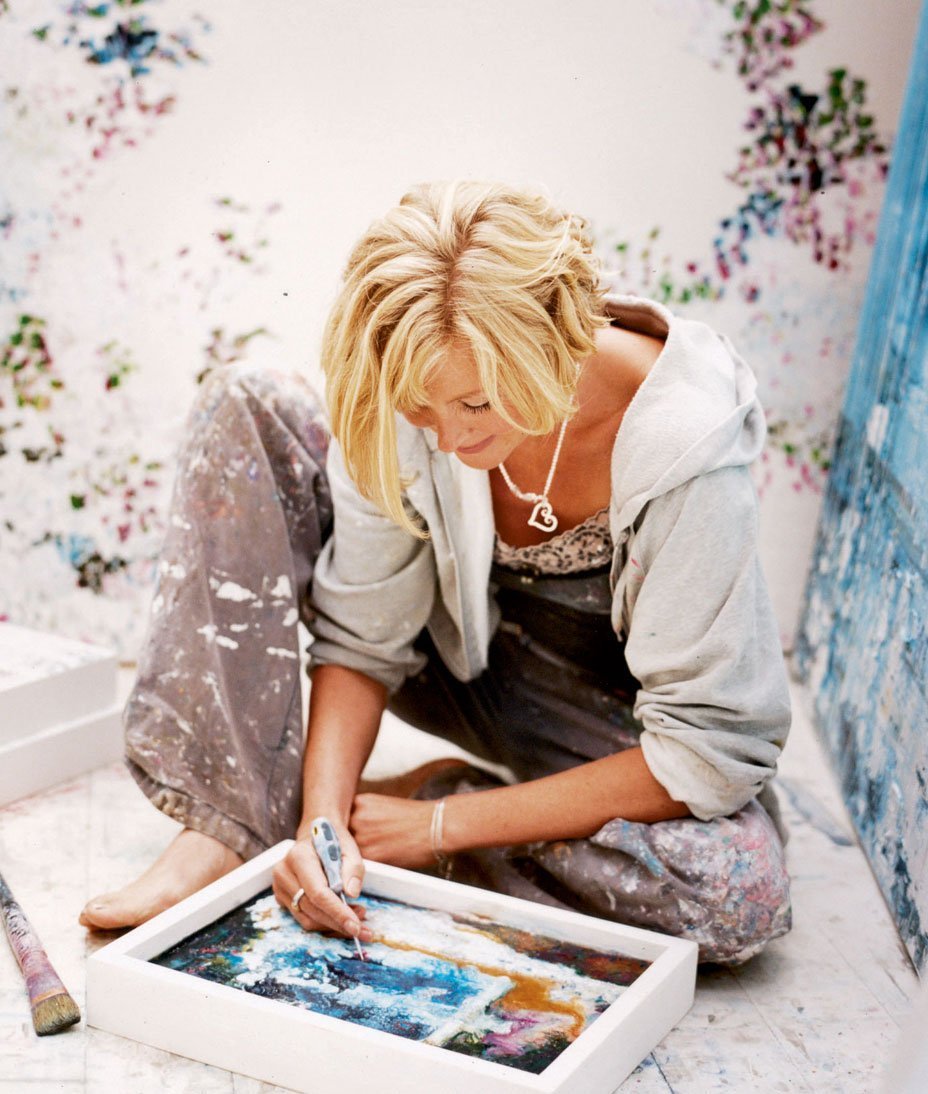 Funnily enough I am not too sure where to start as this whole year has been rather an extraordinary adventure for me! I usually work quietly away in my studio on a farm in East Sussex for months or years at a time and then emerge somewhat reluctantly to present what I have been up to to the world, a terrifying but vital part of making a living as an artist. However in 2013 I had six shows in six weeks over the summer and decided simultaneously to work with my partner Karl Smith who is a sculptor on the most ambitious and quite mad plan to create my first sculptures out of cast resin. I wanted to see what would happen if I tried to encapsulate my paintings in resin rather like insects in amber, the result was a piece almost 3 m tall and weighing 2.5 tons which nearly killed us both! Neither of us having any previous knowledge of resin and did I mention it is highly toxic so we spent most of that glorious summer in Darth Vader masks! Decidedly unglamorous! but unbelievably exciting! 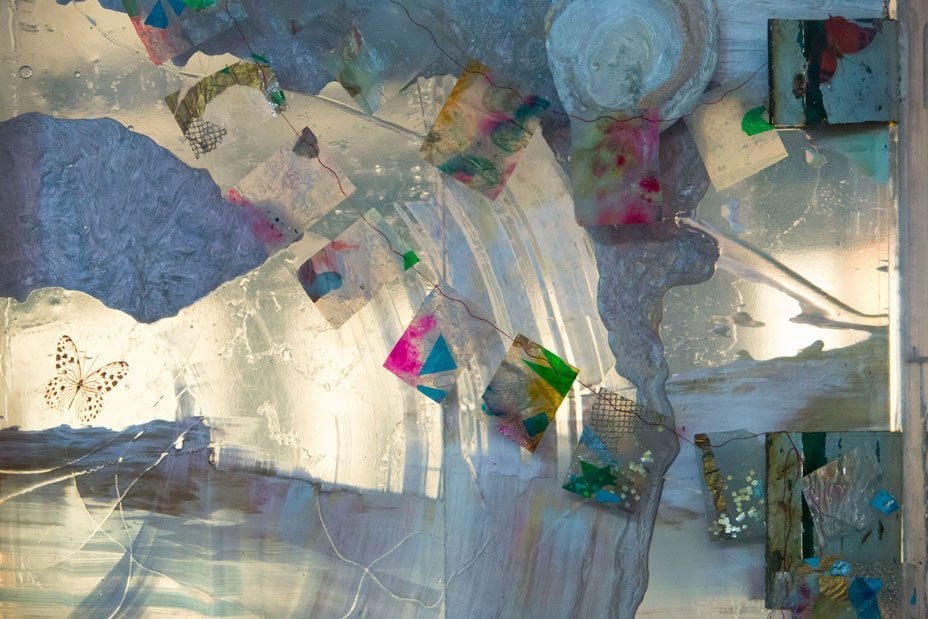 During this same period I was very excited to be approached by Romo Black Edition, a textiles and wallpaper company who wanted to collaborate with me on a new collection which will be launching in a few weeks in Paris and then globally! I was also lucky enough to work with some amazing interior design houses including Foxlington, Intarya and David Linley. 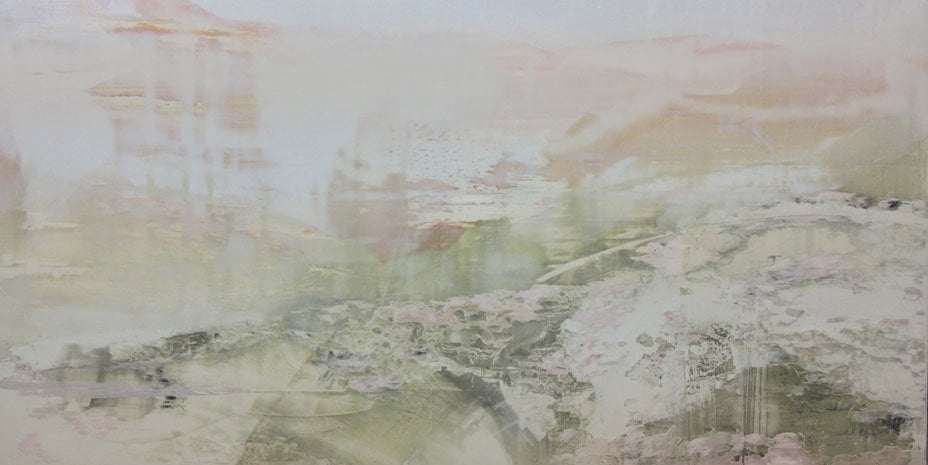 Land of my Dreams recent commission for Linley, oil on canvas.

I haven’t had an awful lot of time for walking this year but it is one of my favourite things to do, whenever I get the chance I head up to the South Downs just a few minutes from my home in Lewes. I find the landscape absolutely enchanting and I love the gentle almost human shapes of the rolling hills. These hills are so often echoed in my work but this is quite a good example of the landscape in snow. 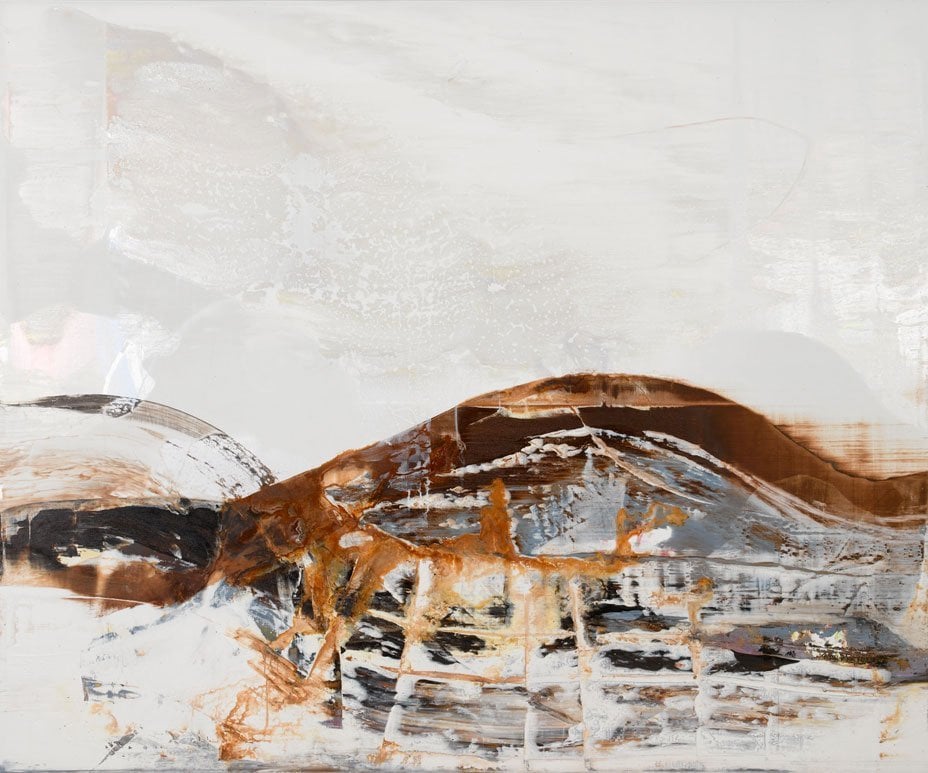 I also absolutely love the sea and chalky cliffs… 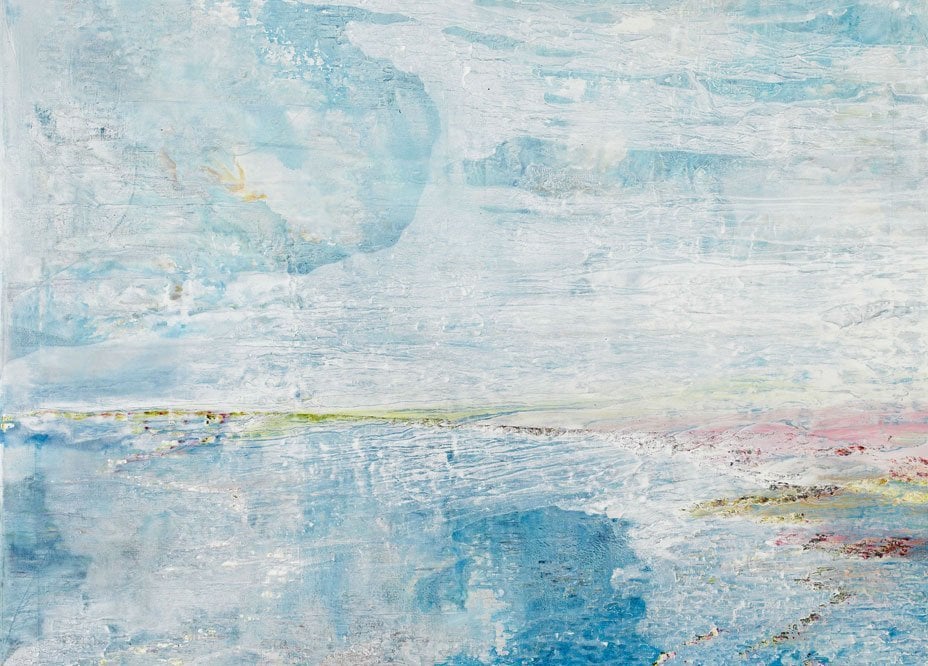 At the end of last year I had the flu and as I was recovering and still somewhat wobbly, Karl decided that as we happened to be near Ben Nevis we really ought to climb it. I have to say I definitely wasn’t sure and there was a fair bit of muttering but wow! Getting to the top in total white out and four foot of snow with frozen hair was utterly exhilarating and I am sure was a huge part of my inspiration for Triumphant! 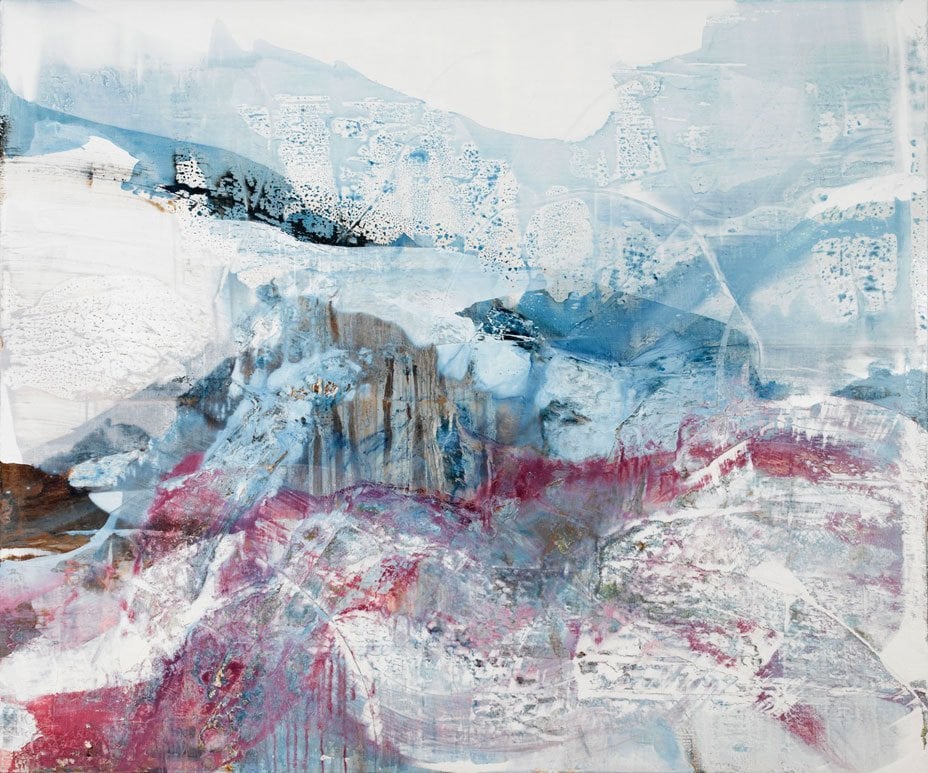 My holidays spent with my parents in their home in the foothills of the Cevennes inspired many works including…. 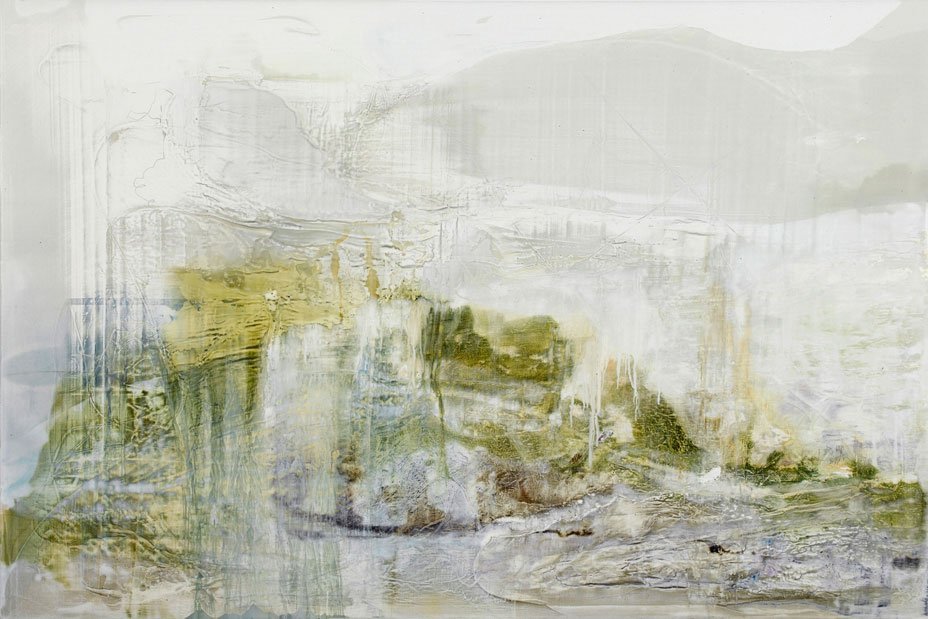 In the past I have loved to wander further afield in China and Indonesia particularly and I am told that there is an oriental energy to much of my work. I just fell in love with the lotus flowers and the lilies and they are definitely a recurring theme. 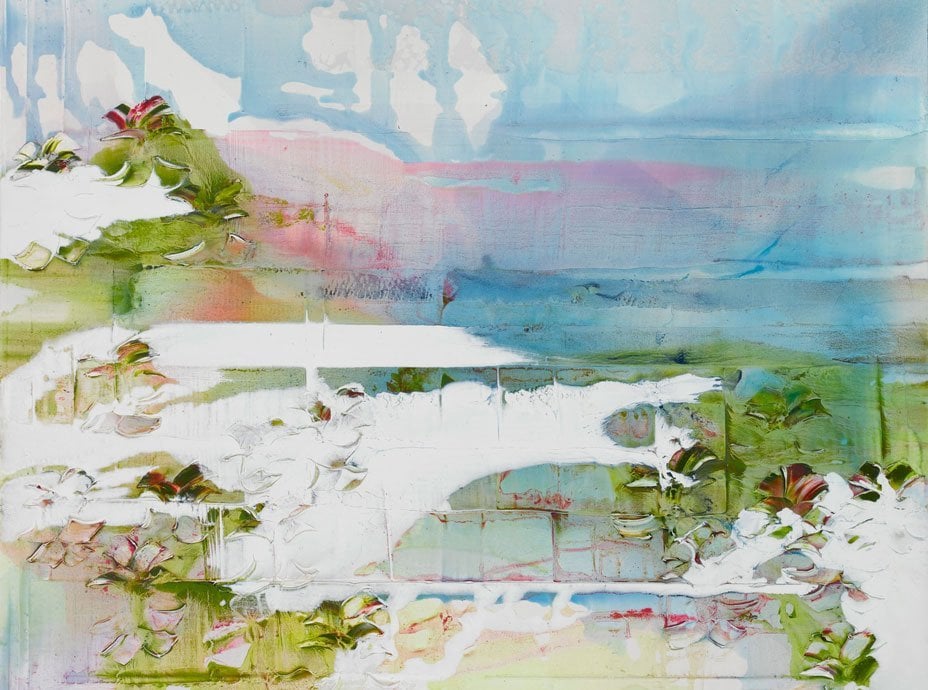 Whenever I get the time I go walking, it is a true passion for me, helping to clear my head, sort out the muddle of being too busy and feeds my soul and creativity, I hope to complete the coast to coast later this year and would be so grateful for any tips on that or other favourite or particularly inspirational walks.
You can find out more together with lots more of her remarkable work on Jessica’s website.