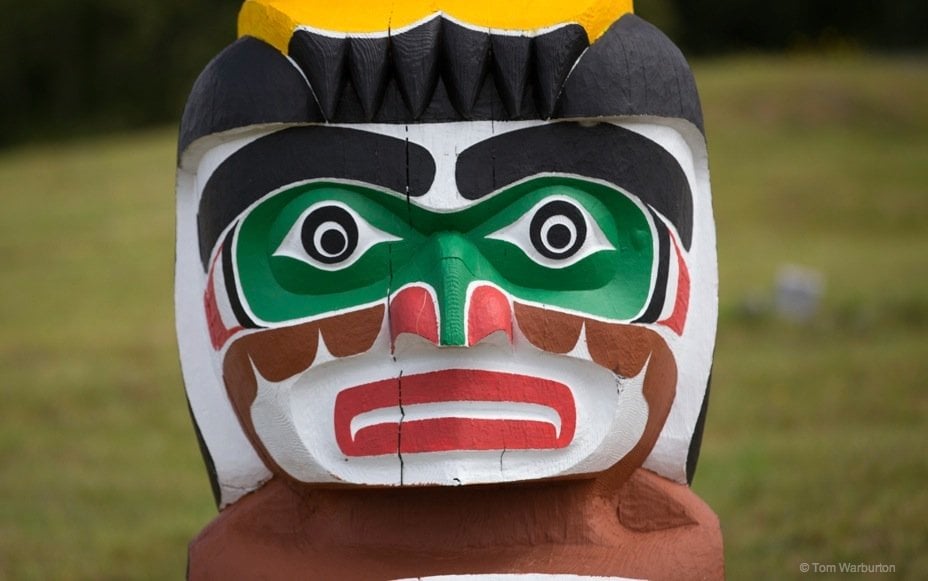 The other blogs in this series from Vancouver Island have tended to concentrate on the landscape, wildlife or tourist activities of the island. Whilst these are, as they would say in Canada “awesome”, the thing that make the Canadian West Coast so special, to me at least, is that fact that there is a surviving, indeed thriving, indigenous culture. We all should understand a little more of these cultures and what happened to them in the early days of European settlement.

The native people of the Western Canadian coast area are generally referred to as the Kwakwaka’wakw people but my understanding is that this is a collective name for a number of groups that speak the same language rather than one ‘tribe’. Each village or area has its own name for its people and place. It is thought that some of the first nation villages in the area may have been inhabited for up to 8000 years. I am no expert, and I make no claims to be so, it is probably best that I refer you to the U’mista Cultural Centre website if you would like to learn more. It is a culture rich in mythology, art and dance. Ravens, bears, orca, salmon, wolves, eagles and the sun are some of the repeating themes in the art and culture.

The pictures below are mainly of the Totem Poles at Alert Bay. These are the real deal and not art pieces or museum artefacts. Each pole is a visual statement which summaries the identity of those individuals that commissioned or erected them – statements of their ceremonial privileges – usually but not always to do with their burial. The poles are not maintained or repainted as the tradition is that nothing lasts forever and when a pole falls to the earth or something is damaged on it, it has served its purpose and it is left lying where it is.

I’ve tried to summarise what I understand – This information and lots more can be found in a great little leaflet you can pick up from the visitor centre in Alert Bay.

There are then three photographs of some rock paintings on an island nearby – one shows a image of a sailing ship and one a horse and carriage, presumably the artist was trying to explain what he or she had seen to a wider group. The last one shows a image of a face which I understand is meant to be an image of the village chief at the time.

If you do visit Vancouver Island I would really encourage you to visit the Alert Bay and the U’mista Cultural Centre – it’s a short ferry trip from Port McNeil on the North West of the Island – about four hours drive North of Nanaimo. The island and its cultural centre give a great overview of the West Coast First Nation’s history and culture. Be warned though – much of it is not comfortable reading for Europeans – the early settlers in the area did not respect the native peoples or their culture much at all. Indeed many tried to destroy it by ‘educating’ the native peoples – the crumbling husk of the St Michael’s Indian Residential School adjacent to the U’mista Centre still stands as a reminder of these dark days. As I understand it the Indian residential school system was implemented in 1879 by the Canadian government to eliminate the “Indian problem”—that is, to absorb the Aboriginal population into the dominant Canadian identity, and to impose Christianity, English or French as the primary languages, and the abandonment of cultural and family traditions. St. Michael’s Indian Residential School in Alert Bay was one of 140 Indian residential schools that operated in Canada – it opened in 1924 and was only closed in 1974.

The suppression of the culture also included introducing laws in 1884, and then later strengthening them, banning the potlatch ceremonies so important in the culture. Infamously, this came to a head in 1921 when 45 people were charged under Section 149 of the Indian Act for “making speeches, dancing, arranging articles to be given away and carrying gifts to recipients”. Some people were jailed for 2 and some for 3 months. Some people were given suspended sentences if the treasured, indeed sacred, artefacts relating to the potlatch where given up. This resulted in many items of ceremonial regalia – including coppers, masks and rattles – being taken and the artefacts being divided up between museums and private collections. Many of these artefacts have now been returned to their rightful owners and are displayed in the U’mista Cultural Centre – World Treasures in my view.