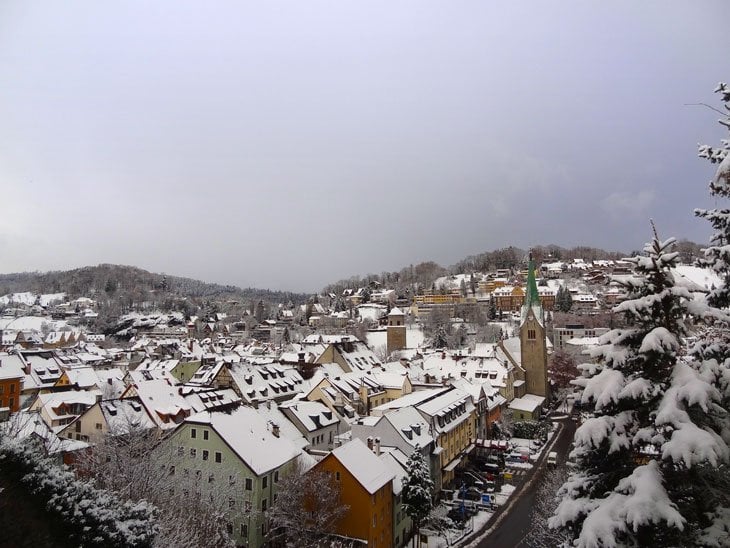 Now that was a great day trip. Fun, snow, new friends, history, sights and great food and drink. Amazing what you can do in a day. It was the inaugural Monarch flight from London Gatwick to Friedrichshafen in South Germany. Six in the morning ready for take off…. What was in store? Actually it was surprises ahead as we were in for a Treasure Hunt 🙂

After a flight of only just over an hour or so we had landed. South Germany’s airport of Friedrichshafen, and the fanfare started with a band to great us. The snow was falling, a chill in the air but everyone had smiles for the day ahead. The game began. We were allocated a driver each from Sixt and we were armed with a brief and our first clue… let’s go! 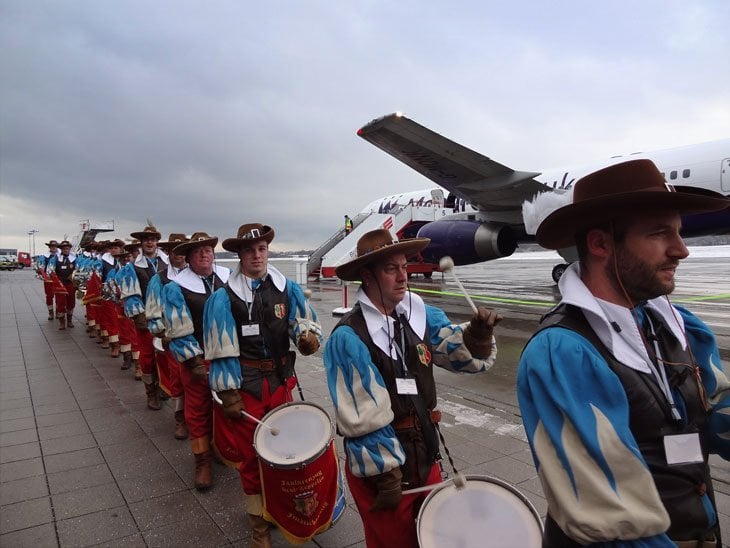 Friedrichshafen airport lies by the beautiful Lake Constance (Bodensee), a magnificent central point to explore this wonderful part of the world. Only a few kilometres southwards and you are in Austria… That is where the first clue took us. Bregenz and the famous Festspielhaus. The first marker had us overlooking the stage on the lake. In process of being built for the next great show, Mozart’s The Magic Flute. This spot was made even more famous in scenes from the Bond film ‘Quantum of Solice’.

The day was still young… where next? Further south within Austria it was and to the pretty idyllic medieval City of Feldkirch (that borders Switzerland and Liechtenstein) and Schattenburg Castle that overlooks it. Built over 800 years ago the view over the City with the snow was sublime whilst inside the castle the fairytale views continued. Within there is a restaurant with fame for its Wiener Schnitzel… so large the plate is completely covered by it and delicious by all accounts. 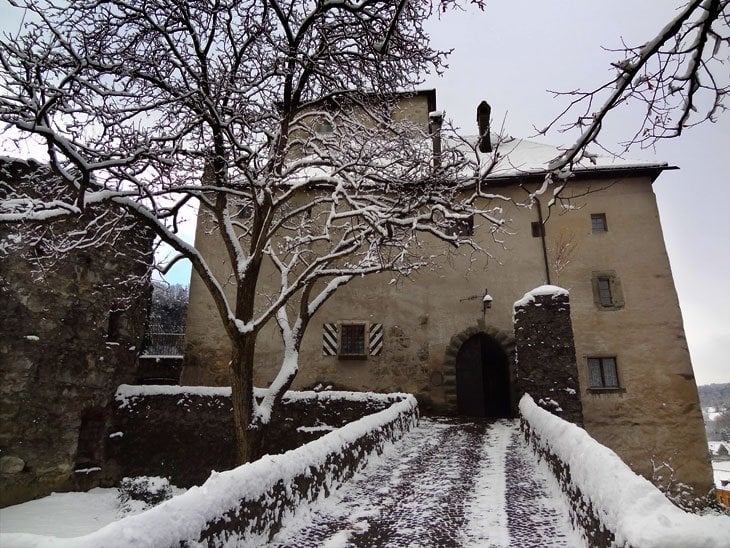 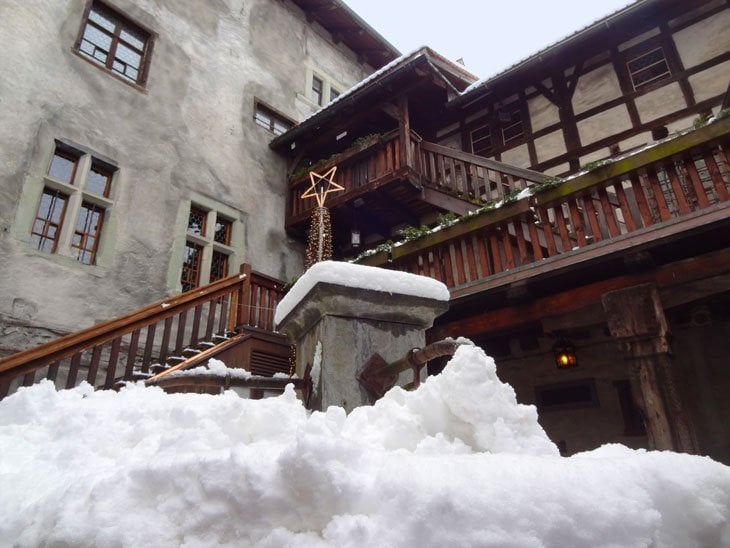 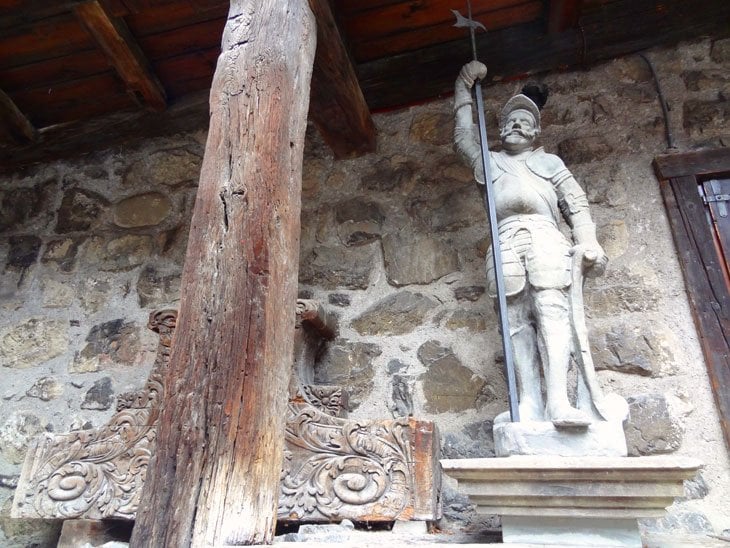 It was still morning and was time for the last clue…… Skiing was the big clue and we headed as the snow fell heavily to Schruns. Home of the largest ski resort in the Vorarlberg district of Austria. This is where we would spend the rest of the day. First… A great Austrian lunch. 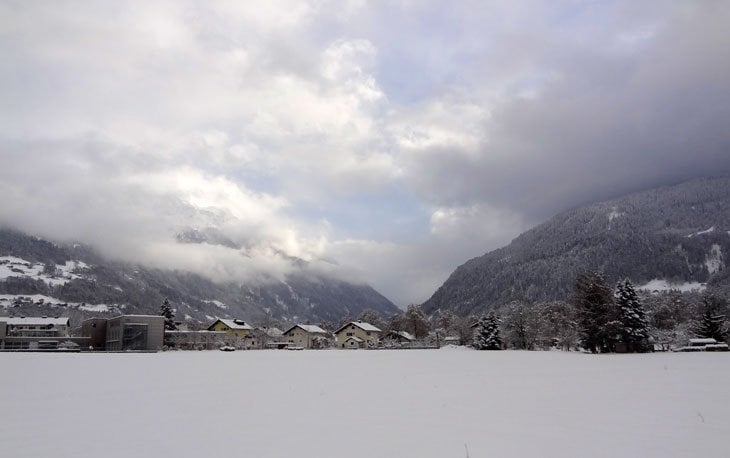 Schruns was a favourite skiing haunt of Ernest Hemingway. He did a lot of his writing here. Gasthaus zum Kreuz had his photo proudly showing at their door from one of his visits. Inside I would say they should be rightly proud of their delicious Käse Knödel .. of course washed down with a perfect bier. 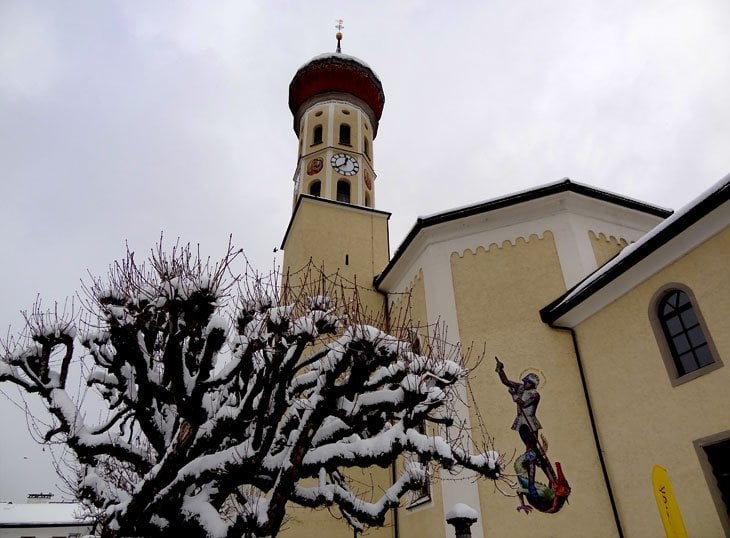 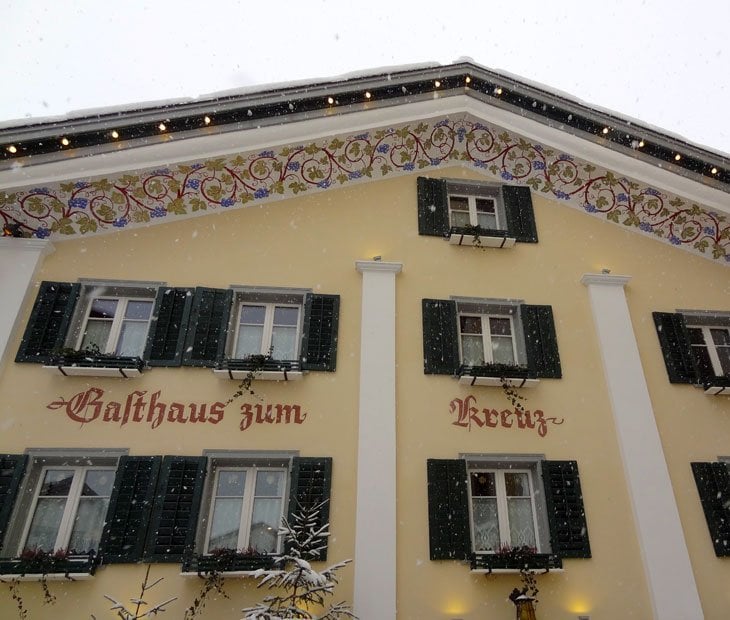 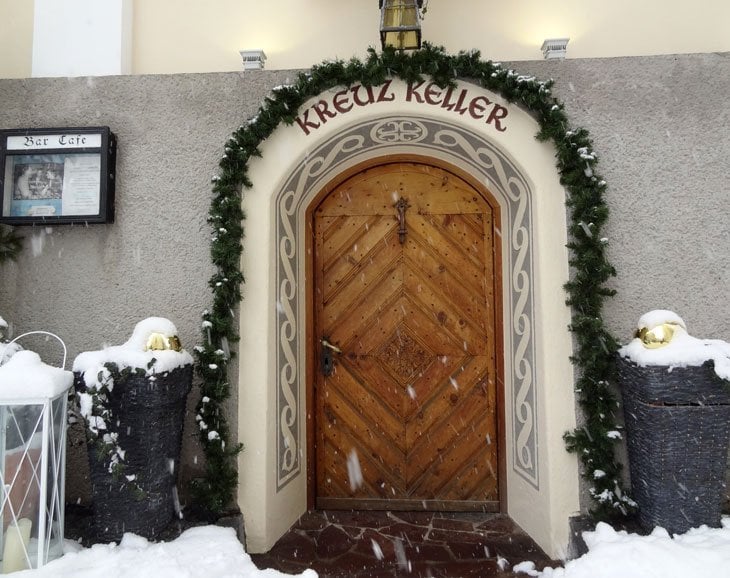 The snow outside was falling more heavily. Everything getting white and wonderful. Let us go out and up to the slopes of Silvretta Montafon Ski Resort itself. The cloud was low as the early season snow was upon us but although that obscured the alp peak views and landscapes galore of normal we got a treat as this was the last day of training for the World Cup snowboard cross that was due to take place here the next day. To watch the experts was fantastic.. I can’t even stand up on a board never mind go anything like they did. 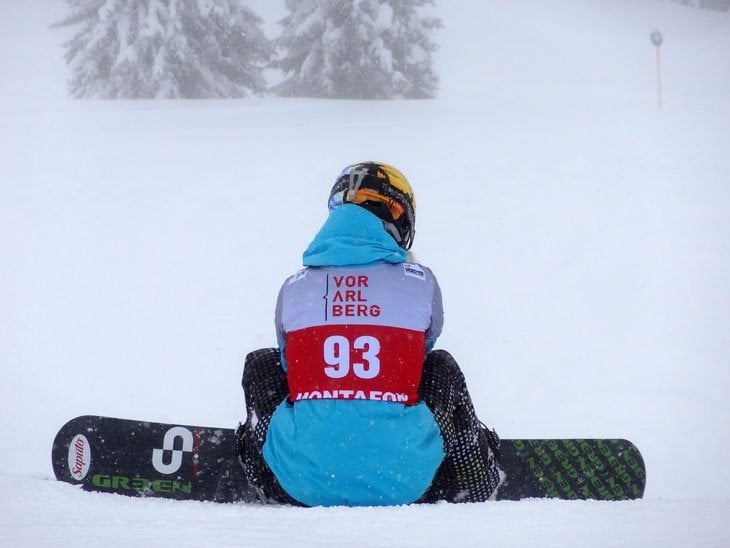 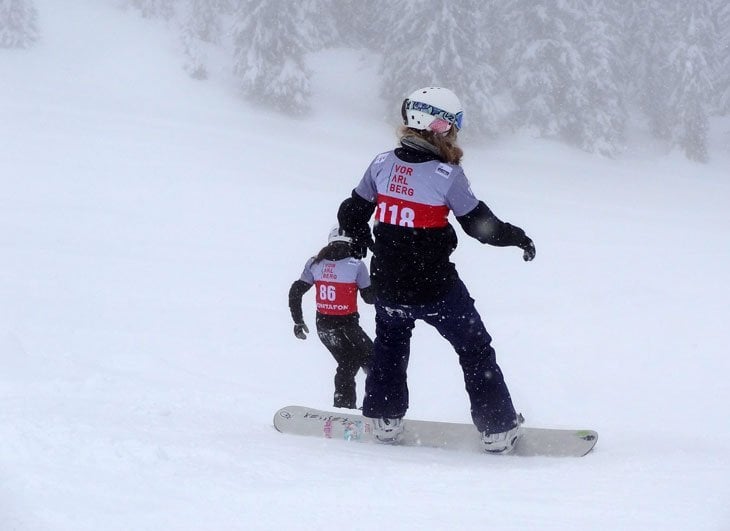 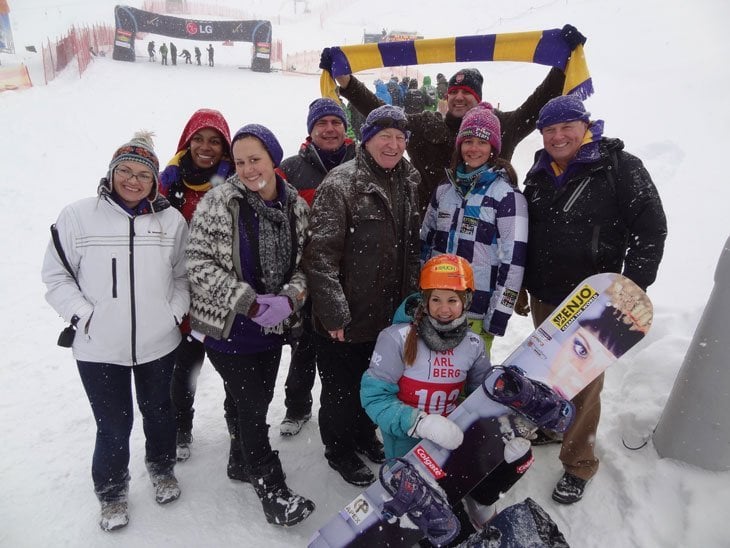 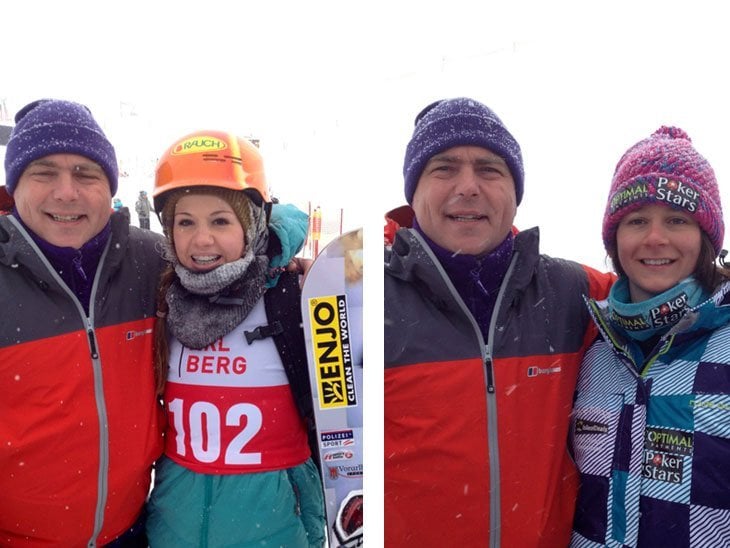 What to do after all the outdoor fun? Why some Apres-ski of course. Music loud, jaegertee and lots of schnapps type affairs going down and great new friends from throughout the day. Great combo and atmosphere. 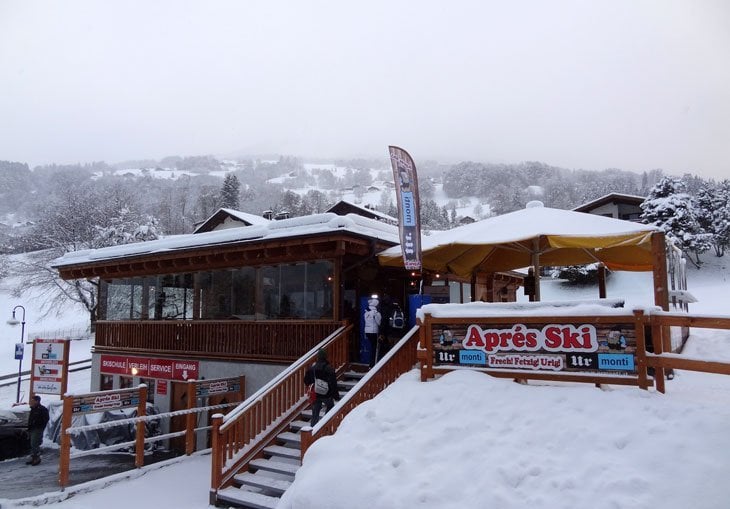 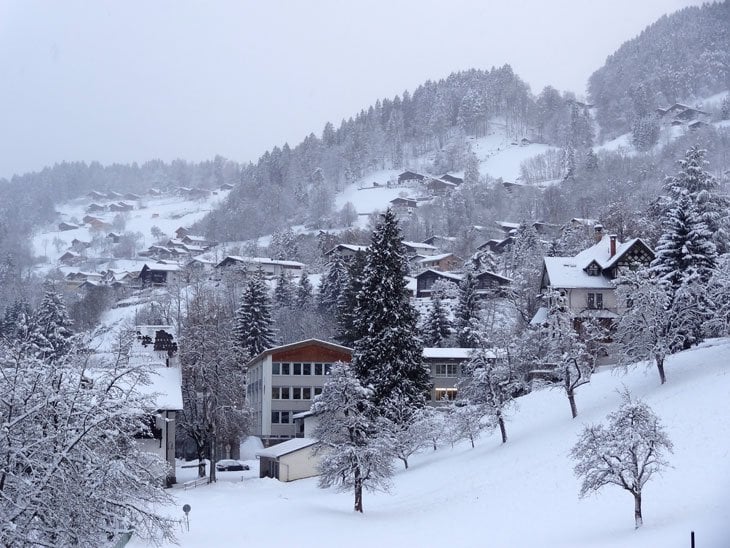 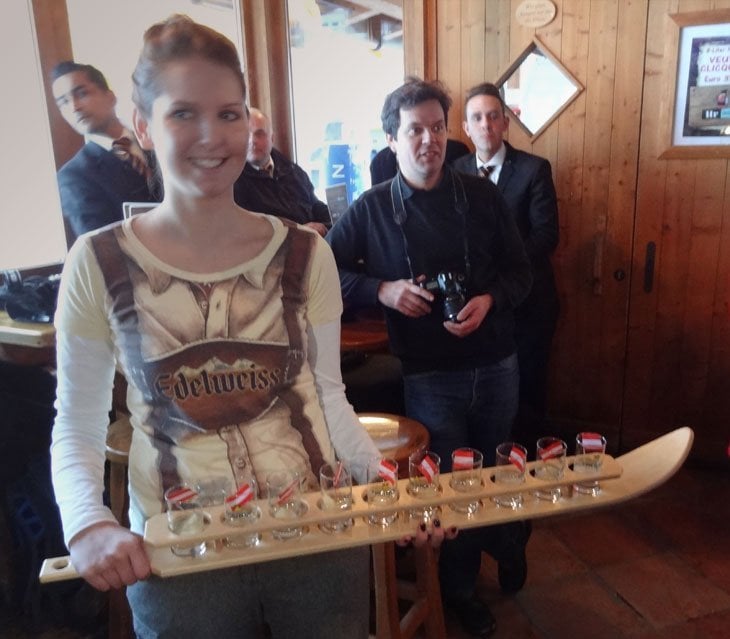 Alas it was time to head back to the airport. But with one final hurrah. Wurst, bier, German band, good moods all combined with wonderful local hospitality as we swayed, sang and chatted to flight time. Oompah Oompah. 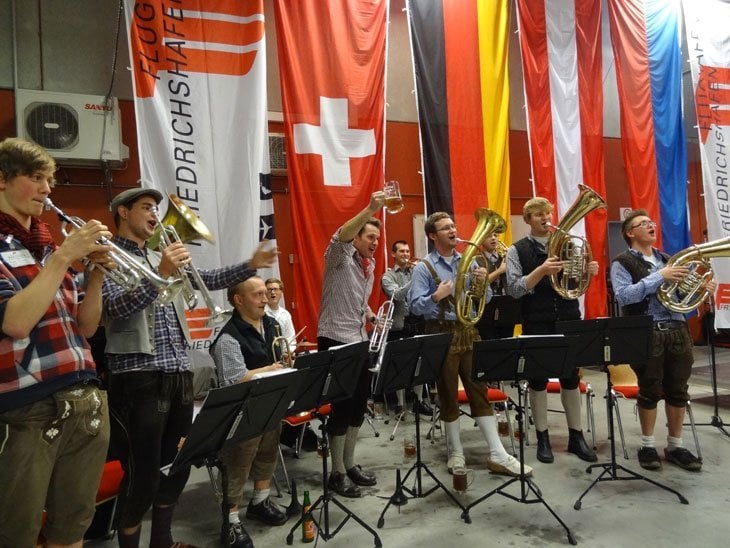 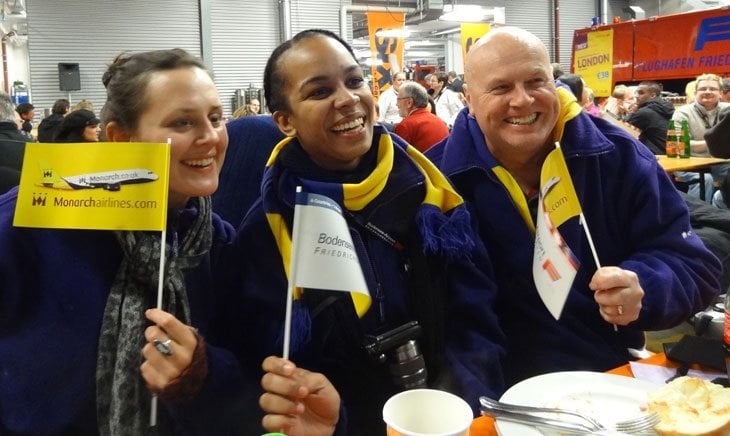 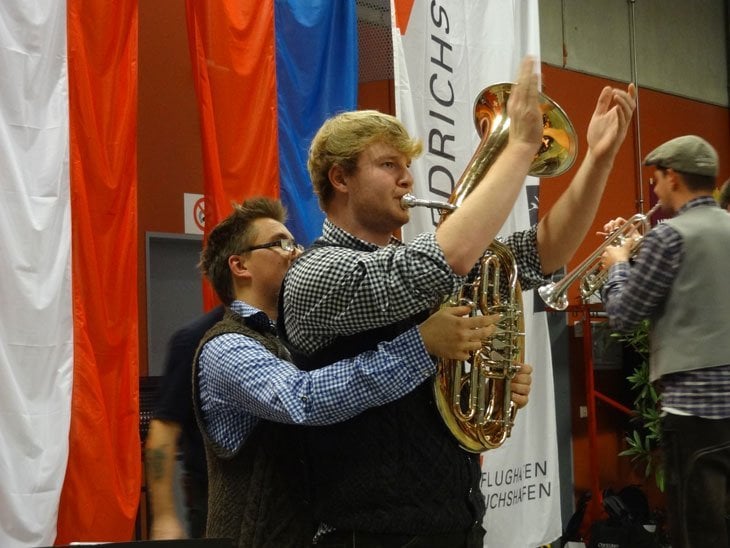 Arriving back in London the same day I had set off.. Having done all that without any stress of a rush was incredible. Simply amazing what you can accomplish in a day and where you can get to isn’t it? The action was also filmed for the memories, take a look